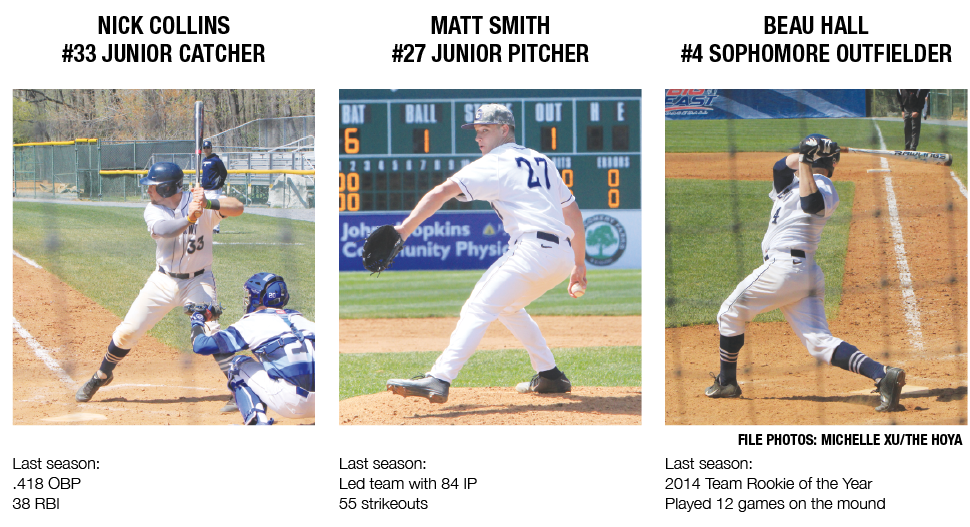 Friday afternoon, the Georgetown baseball team will open its season against Bucknell at the Wake Forest Invitational in Winston-Salem, N.C.

Coming off a disappointing season that saw the team finish sixth out of seven teams in the Big East, the Hoyas will hope for better results in the new year.

There are many positive signs that point to a much more successful campaign for Georgetown. Only two of last year’s starters left the team, though one of the players was 2014 Team MVP first baseman Steve Anderson. However, the Hoyas are confident that they can overcome the loss of Anderson.

Head Coach Pete Wilk, who will be entering his 16th season coaching the Georgetown baseball team, will lead the team once again. Wilk is eager to start the 2015 season and is looking forward to seeing who will step up for his team.

“I think you first look at your captains: Hollenbeck, [redshirt senior pitcher Jack] Vander Linden and [senior shortstop Ryan] Busch.” Wilk said. “I think there are a few other bodies in that locker room that will lead as well. I think leadership is going to be a strength of this team.”

One interesting player to look for this season will be the aforementioned Vander Linden. Entering the 2014 season, Vander Linden was expected to be the staff ace and to have a very good senior season. Instead, he needed Tommy John surgery after only throwing six innings. As a result, the senior decided to redshirt in order to retain eligibility for this season.

Vander Linden is going to be eased back into pitching and is only expected to throw two or three innings during his first couple of starts before increasing his workload. If he can return to his pre-injury form, a trio of Hollenbeck, Smith and Vander Linden would be a dangerous pitching rotation heading into the Big East season.

The Hoyas are also thrilled about overall depth of their roster. Last year’s team was riddled with injuries. Many pitchers sat out the entire season and multiple position players were forced to play out of position. This year, the pitching staff is deep and Georgetown has at least two viable options at every position in the field.

Wilk, however, is cautious and plans waiting to see how the season plays out.

“Last year we were playing three or four guys way out of position and it was a nightmare. We had a bad year last year,” Wilk said. “This year, we’re two deep in each position. But it’s all relative; that could collapse in the first game. I don’t know that I would be boasting about our depth, but we’re a lot deeper.”

In addition to retaining several important players, Georgetown adds a talented freshman class that is expected to contribute from day one, further accentuating the team’s depth.

“Chase Bushor is probably going to start at second base right now and then [outfielder] Austin Shirley — if we leave the state of North Carolina without him getting a start in the outfield, I’d be shocked,” Wilk said.

In addition to those two, pitcher Kevin Superko is another freshman that will get early playing time, as he is starting on the mound for the Hoyas on Sunday and will be the third pitcher in the rotation to start the season.

Overall, the team is focused, heading into the season with one goal in mind.

“This season we were voted dead last in the conference and the main goal is to prove everyone wrong,” sophomore center fielder and 2014 Team Rookie of the Year Beau Hall said. “I know we didn’t have a great year last year and this year is looking good, and we just want to make the Big East Tournament.”

Wilk made that goal even simpler.

“Win. Win as many games as we possibly can. Treat every game as a solo entity that we need to win. We’re going to do everything we can to win. We’ve got a lot of talent. We have a nice mix of upper class and younger guys. We’ve got nice leadership going right now. I’m really excited about this club.”