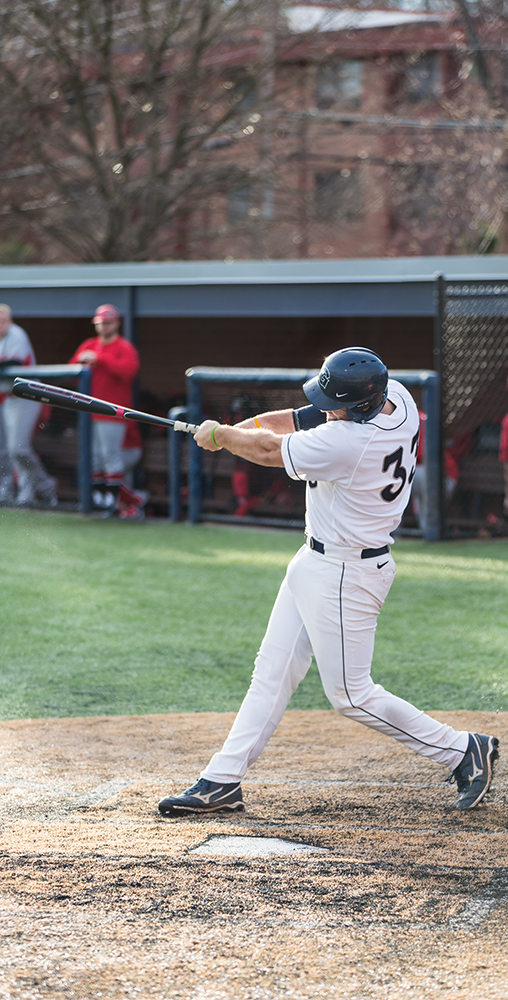 After a mixed half season of non-conference play featuring bursts of wins and losses that ultimately led the team to a record just under the .500 mark, the Georgetown baseball team (12-13) will now turn its attention to the Big East Conference. The reworking of the conference adds several new opponents to the Hoyas’ slate, including the first team they will face: the Xavier Musketeers (13-13).

Despite some struggles earlier in the season, the Hoyas will enter a three-game home series with the Musketeers Friday after stringing together some much-needed success over the past week. The Hoyas have won three of their last four, including two road wins against Grambling State in Louisiana and a win against crosstown rival George Washington earlier in the week. These wins have contributed to positive sentiments in the dugout.

Many of the difficulties Georgetown has faced so far have risen from issues with starting pitching and a lack of available arms. Injuries and issues with the development of younger players mean these issues will continue to be a factor as conference play begins.

Pitching slots are being filled by players called upon to step up, but the team has found difficulty preventing runs on a consistent basis. And with the season already so far along, it may continue to be an issue indeterminately.

“It’s a mix-and-match weekend, and that’s not an ideal spot for any weekend,” Wilk said. “But it may be the situation for the rest of the year.”

Younger players have been forced to step up into pitching roles as a result of these shortages, The success of these young arms will play a pivotal role in giving Georgetown the edge over a Xavier team finishing non conference play with similar results to those of the Hoyas. Poor performances from the pitchers could mean a poor start to conference play.

“Some guys have got to step up who haven’t stepped up yet. I think we should have a few more wins than we do, but we’re not far away from where we should be either,” Wilk said. “These kids battle and they fight. I like the way we play together as a team.”

Offensive ability has powered the Hoyas when pitching efforts flounder, and it has been an important factor in Georgetown’s recent wins. In particular, the efforts of senior first baseman Steve Anderson and sophomore catcher Nick Collins have provided critical power and production for the Hoyas, and their presence has the potential to control the outcome of any of the Georgetown-Xavier matchups. Junior infielder Ryan Busch has also provided potency in the leadoff spot.

“Steve Anderson obviously had some huge hits down in Louisiana for us, major hits at critical times in games,” Wilk said. “Collins has been consistently very good all year, and if you take those two out of our lineup, I have no idea where we’d be. I can guarantee you it wouldn’t be a very good offensive team without those guys.”

The new rivals in the Big East add an element of uncertainty to the remainder of the season for Georgetown, with many of the Hoya’s traditional rivals gone and replaced with unfamiliar squads.

“We’re going to have our work cut out for us against Seton Hall. St. Johns should be a dogfight and Villanova, on paper we come in being a little better there, but they’re all going to be dogfights,” Wilk said. “As far as the three new teams, we’ll find out in a hurry.”

Xavier comes into the series against Georgetown on the end of a string of losses that abruptly drew its record down to .500. The Musketeers were able to snap a five-game losing streak March 29 against Butler, but they have still struggled considerably in past weeks, going 2-7 in their previous nine games dating back to March 19.

Georgetown, alternatively, has gone 6-3 in the same time period, including strong road wins against Grambling State. Welcoming Xavier at home to Shirley Povich Field provides an opportunity for the Hoyas to jump ahead early in league play against an opponent that seems to be following an opposite track.

All three games in the series will be held at Shirley Povich Field in Bethesda, Md. First pitch for Friday is set at 3 p.m., for Saturday at 1 p.m. and for Sunday at 12 p.m. The Hoyas will face George Mason and Creighton later in the week.