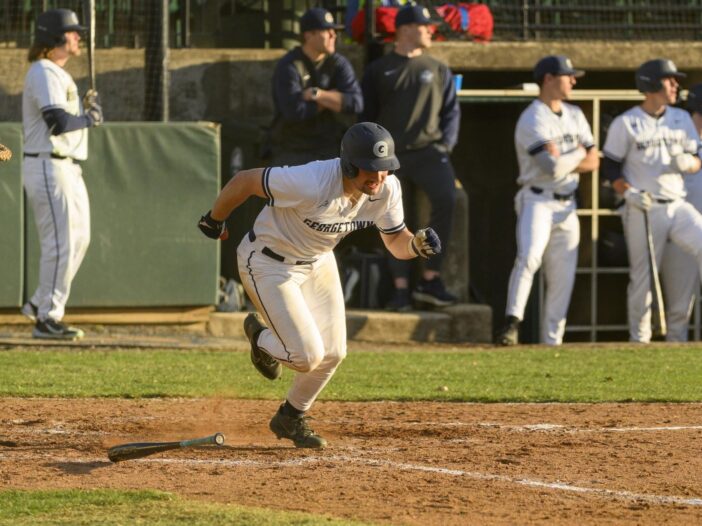 After securing an early lead, the Georgetown University baseball team allowed George Washington to hammer in 10 unanswered runs, propelling the Colonials (12-13) to a 11-7 victory in another iteration of the crosstown rivalry.

The Hoyas (16-9) came into the game red-hot, having just swept the Virginia Military Institute Keydets in a three-game series, outscoring them 24 to 14.

Sophomore right fielder Jake Hyde, who has led the Hoyas on offense all year, slugged baseballs all week. In Georgetown’s four games last week, he slashed a .444 batting average, a .500 on-base percentage and a 1.222 slugging percentage. Hyde also clobbered 4 home runs and batted in 15 runs en route to his third Big East Player of the Week award this season.

Additionally, Hyde was named one of Collegiate Baseball’s National Players of the Week, placing him in the upper echelon of hitters in college baseball this year. He is tied for No. 6 in the country in hits, tied for No. 5 in home runs and is eleventh in the nation in slugging percentage.

On the other side, George Washington came into the match scuffling. The Colonials looked for a bounce-back win after getting swept over the weekend by East Tennessee State.

After a scoreless first inning, Georgetown got on the board in the top of the second. Back-to-back singles from first-year designated hitter Owen Carapellotti and junior catcher Adam Dapkewicz gave the Hoyas a great opportunity. They capitalized when a masterfully placed sacrifice bunt from sophomore shortstop Michael Eze forced a throwing error and allowed both Georgetown runners to score. Hyde remained on fire with a 2-run home run and graduate second baseman Ethan Stern added his own 2-run homer, propelling Georgetown to a 6-0 lead.

George Washington was able to scratch across a run in the fourth inning to cut the Hoyas’ lead to 5 on a fielding error, but Georgetown scored one right back in the top of the fifth with a Dapkewicz RBI single to make it a 7-1 ballgame.

However, the Colonials came roaring back. They scored 2 runs in the fifth on an RBI double from infielder Joe Biancone and an RBI single from outfielder Cade Fergus.

In the sixth, a sloppy throwing error from the Hoyas allowed George Washington to tack on another run, making it a 7-4 game. With that, Georgetown graduate starting pitcher Collin Garner was done for the day. In his six innings of work, he gave up 9 hits, 2 earned runs, walked none and struck out five Colonial hitters.

With Garner out of the game, George Washington took advantage of Georgetown’s bullpen in the bottom of the seventh and seized control. The Colonials brought 10 men to the plate, scoring 4 runs on just 3 hits in the frame. Walks plagued graduate pitcher Nick Borek, graduate pitcher Andrew DeRoche and senior pitcher Anthony Redfern, who were three of the four Georgetown relievers needed to get out of the inning. Senior pitcher Angelo Tonas was able to come in and strike out Biancone with the bases loaded to escape the jam, but the inning ended with GW on top, 8-7.

Georgetown had a great opportunity to even the score in the top of the eighth: Eze and graduate left fielder Evan Blum both walked, giving the Hoyas runners on first and second with only one out. Unfortunately, sophomore center fielder Andrew Bergeron lined out and Hyde uncharacteristically struck out, allowing George Washington to escape the threat unscathed.

In the bottom of the eighth, the game got out of hand for the Hoyas. Tonas, who had a 1.53 ERA coming into the game and had pitched well all season, was unable to quell the explosive bats of the Colonials. George Washington scored 3 more runs, capitalizing on the 2 singles and 3 doubles they cracked off Tonas.

Anticlimactically, the Hoyas went down 1-2-3 in the top of the ninth, ending the game. After scoring 10 unanswered runs, GW defeated Georgetown 11-7. Pitcher Benny Wilson (2-0) picked up the win for GW, while DeRoche (0-1) was credited with the loss.

Following the loss to Towson, the Hoyas bested Coppin State (9-15, 5-3 MEAC) 17-11 on March 30. Looking forward, the Hoyas begin Big East play this weekend when they host Villanova (7-13-1) for a three-game series. Georgetown will take the field versus the Wildcats at 4 p.m. Friday, April 1.