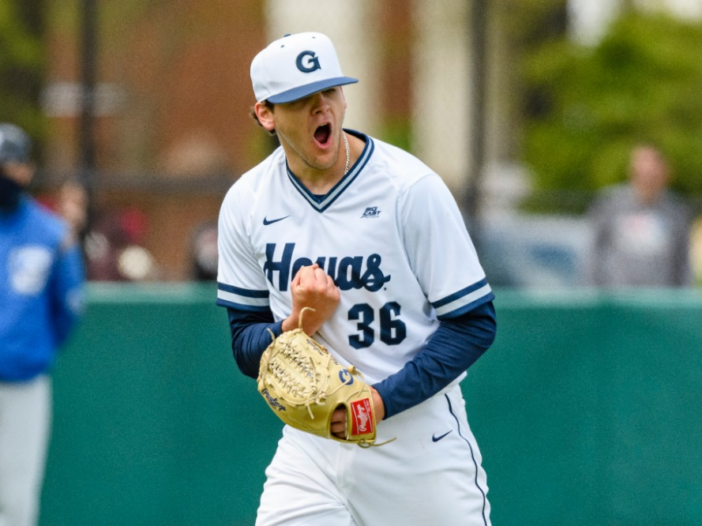 The Georgetown men’s baseball team secured a 3-2 victory over the Creighton Bluejays on April 25, ending a three-game losing streak. The Hoyas hope to keep this newfound winning momentum going as their abbreviated season continues.

The series between Creighton (14-18, 6-1 Big East) and Georgetown (4-8, 4-6 Big East) opened with a doubleheader April 23. In the first game, the Bluejays’ Dylan Tebrake held the Hoyas to two hits in a seven-inning shutout. He struck out eight, and only three Georgetown players reached base.

On the other side of the ball, Georgetown junior left-handed pitcher Angelo Tonas struggled early, allowing a runner to reach third on a failed pickoff attempt. He escaped the inning with only one run on the board, but Creighton got runners on base for the next three innings.

In the fourth inning, the Bluejays broke through, scoring four runs. Tonas made it out of the inning, and the Hoyas never found a way back into the game, losing 6-0. Tonas fell to 1-2 on the season.

In the second matchup of the day, Georgetown had a few more chances but left six men on base and let Creighton score three runs in the sixth inning. The Bluejays came out on top, 5-0. Junior left-handed pitcher Jack Weeks struck out seven for Georgetown but allowed four earned runs. He moved to 0-3.

On Saturday, the Hoyas came back rested and scored two early runs to go up 2-0. Senior infielder Eddie McCabe earned a walk to start the inning. He advanced to third on graduate student A.J. Lotsis’ single and then scored on sophomore infielder Andrew Ciufo’s fourth RBI of the season. Lotsis came around to score as well on an RBI groundout.

Still, the Bluejays scored two runs of their own in the top of the fourth. Georgetown’s junior starter Carter Bosch left the game after five innings, allowing only two runs. Junior pitcher Anthony Redfern, however, walked a run-in in the sixth and took the loss — his first on the season. The Hoyas gave up another run to lose 2-4.

Georgetown got the last laugh in the series finale, gritting out a come-from-behind 3-2 victory on Sunday morning. Creighton went up 2-0 on a third-inning home run, but Georgetown settled in and fought its way back into the game. McCabe got things going again in the fifth, singling up the middle to start the inning. Lotsis stepped up and took the Blue Jays’ pitcher to left field for a two-run homer. Just like that, the Hoyas were back in the game.

Georgetown held Creighton even for the remaining four innings, forcing the teams to play extra baseball tied at two. In the bottom of the tenth, Lotsis was placed on second according to college baseball rules. Sophomore infielder Patrick DeSalvo advanced him with a great sacrifice bunt, setting the stage for the Hoyas to go home with a win. Ciufo stepped up to the plate and watched the count go to 0-2. The third pitch came in, and he lifted a fly ball to right field. Lotsis tagged up, and Georgetown walked off with a 3-2 victory.

Georgetown starter Nolan McCarthy pitched well over eight innings, allowing only two runs on six hits, no walks and striking out seven. Junior Chase Walter came on in relief in the ninth and held Creighton scoreless over his two innings of work. Ultimately, Walter got the win to go to 1-0.

The Hoyas will be back in action against Big East rival Seton Hall University on Wednesday, April 28. The game will be played in South Orange, N.J. at 3 p.m. EST and be broadcasted online.