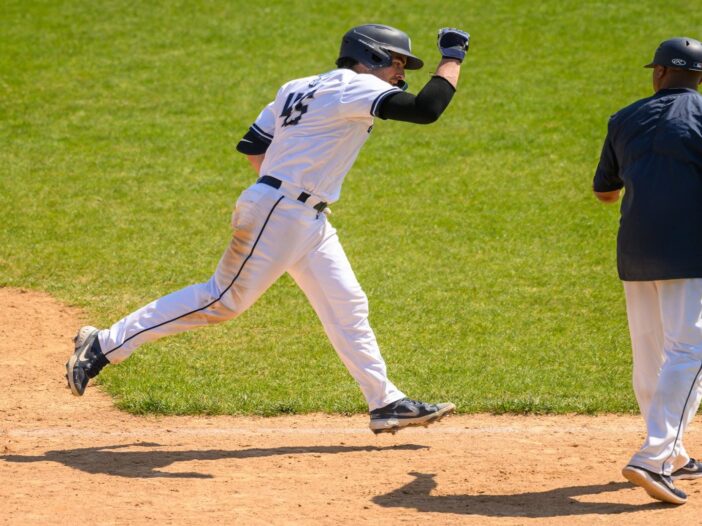 With a win to both teams’ names, Georgetown handed Xavier the series victory by blowing a 6-1 lead in the rubber match. Despite the series loss, the Hoyas have already eclipsed their 2021 regular season win total by 18 victories with 13 more games to go before the Big East tournament begins May 26.

This matchup was a tale of two scoring powerhouses. The Xavier Musketeers (21-21, 5-4 Big East) rank second in the Big East with 56 homers and a team batting average of .281. Similarly, the Hoyas (24-17, 5-7 Big East) have been successful largely thanks to their 68 home runs, which leads the Big East.

The Musketeers needed to limit the long ball for the Hoyas throughout the series, and they did just that, allowing just one homer in three games. Without these jolts, the Hoyas’ offense stagnated, and they were only able to average 5 runs per game, down from their average of 7.5.

Georgetown’s pitchers did their job for the most part, limiting Xavier to just four runs in two of the three games. If it weren’t for a seventh-inning pitching collapse in game three, the Hoyas would likely have come out of the series with the overall victory.

Georgetown graduate pitcher Nolan McCarthy started the first game of the series, while Xavier decided to pitch by committee, starting Luke Bell for just under three innings. McCarthy made it deep into the ball game, allowing just one run in nearly seven innings. McCarthy finished the game with eight strikeouts and one walk after 102 pitches. However, the tides turned when senior pitcher Angelo Tonas replaced McCarthy in the seventh. Tonas was credited with two runs and received the loss.

Although the Hoyas needed to respond offensively, they were unable to find their rhythm. Georgetown ended the game with a meager five hits and struck out 12 times.

After the miserable showing in the first game, the Hoyas began the second game determined to put runs on the board. Georgetown took an early 2-1 lead in the first inning and never looked back. A push by the Musketeers in the seventh inning fell short and the Hoyas got their revenge, winning the second game six runs to four.

Georgetown senior pitcher Carter Bosch received the win for the Hoyas after holding Xavier to four runs in just under seven innings. Bosch finished the game with a stellar 11 strikeouts.

Entering the third game, Georgetown had high hopes of continuing its momentum and stealing the series from the Big East’s third-ranked team. Quickly, the Hoyas built a 4-1 lead, eventually expanding it to 7-1 after six innings.

However, Georgetown was unable to maintain its dominance. Hoyas first-year pitcher Matthew Sapienza pitched spectacularly the first six innings, allowing one run and striking out seven, but he ran into trouble in the top of the seventh. Sapienza allowed a lead-off single and then watched as third baseman Jared Cushing drove a 0-1 pitch over the left-field wall.

Georgetown could not improve in the rest of the seventh inning, cementing its disappointing series loss. The Musketeers rattled off seven runs to seize an 8-7 lead that they did not relinquish.

Following its series loss, the Hoyas bounced back with a 3-1 defeat of George Washington (19-21, 7-5 Atlantic 10) April 26. Georgetown will look to build on this momentum heading into a three-game home series against the Seton Hall Pirates (13-28, 3-6 Big East) from April 29 to May 1.