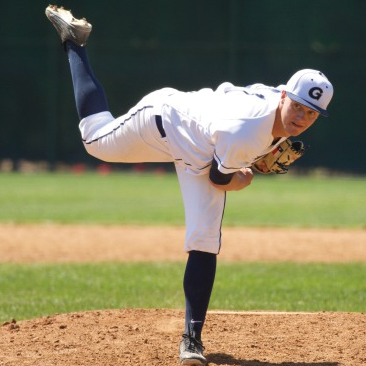 To say that Head Coach Pete Wilk is results-oriented when it comes to evaluating the Georgetown baseball team would be an understatement. For Wilk, the season is all about the end result.
“Preseason does not mean anything. It’s the end of the year that does,” Wilk said.
Last year’s end result left room for improvement. The Hoyas missed out on the Big East Tournament and finished with a 25-29 overall record and an 8-10 Big East record.
Despite the losing record, pitchers Matt Smith and David Ellison heard their names called in the Major League Baseball draft, and the program graduated a total of eight seniors. Nevertheless, the Hoyas return some key talent.
Two Hoyas — senior pitcher and co-captain Simon Mathews and junior outfielder Michael DeRenzi — received spots on the preseason all-Big East team. Mathews finished last season with a 2.45 ERA and five complete games.
“Simon has pitched at the highest level you can in the collegiate game and had success there, and even before that I thought he could beat anybody almost in the country,” Wilk said
DeRenzi led the team in batting average, total bases and stolen bases. He recorded 20 multi-hit games over a 54-game season. After watching him in preseason, Wilk expects the outfielder to continue to improve in 2017.
“If he continues to do what he has done the last two weeks, he’s going to have a really good year,” Wilk said of DeRenzi.
With three seasons already under his belt, Mathews has plenty of experience. In his fourth year, however, the co-captain said he believes the team has one advantage heading into the 2017 season that he has not yet enjoyed as a Hoya.
For the first time in Mathews’ career, this preseason the Hoyas practiced on an actual baseball field. In the past, the team has managed with indoor work and drills on Cooper Field. It is not hard to imagine how much the team has appreciated the extra fieldwork it received this past preseason.
“We’ve been able to get out to our field in Bethesda the last couple weekends and have inter-squads,” Mathews said. “So I think in terms of preparation for this year … we’re miles ahead of anywhere we’ve been in the past.”
Wilk echoed his pitcher’s sentiments, mentioning that most years the team usually does not make it to Shirley Povich Field, where the team plays its home games, until about St. Patrick’s Day.
“We’re the most game ready we’ve been in five years, I’ll tell you that,” Wilk said.
An influx of new talent could bolster the hopes for the Hoyas this season.
The team added 12 new players, including nine freshmen. At least one of the rookies will immediately step into a big role, as freshman infielder Ryan Davis will be taking over as the starting shortstop from junior Chase Bushor, who is no longer with the team.
“[Davis] has really impressed me with his poise, honestly, [and] with his talent. He’s just been a really great teammate since he stepped on campus,” Mathews said.
A pair of graduate transfers also drew praise from Mathews and Wilk. Pitcher Alex Deise and outfielder Zach Racusin join the team from Florida State University and Marist College, respectively, and look set to take on key roles for Georgetown.
Deise adds depth to the bullpen as a left-handed reliever who Wilk expects to enter late-game situations, potentially as the closer. Racusin, meanwhile, should feature as a top-of-the-lineup hitter along with fellow outfielder DeRenzi.
“We’re blessed to have two guys that are really going to help us [Racusin and Deise],” Wilk said. “They’re going to be major players in this team …. We got really lucky with both guys.”
The impact of returning veterans, extra field time and new additions will be tested Feb. 17 when Georgetown opens its season away at Davidson for a three-game set. That matchup is the first of several road trips to start the season.
The Hoyas are scheduled to play their first 20 games away from home, not returning to Bethesda, Md., for the opener at Shirley Povich field until March 22. In addition to games in Maryland, Virginia and the Carolinas, the team’s travels take it to Port Charlotte, Fla., for the Snowbird Baseball Classic.
For Wilk and much of the team, the road trips are merely business as usual for a team looking to escape the winter weather.
“Upperclassmen, they have never known anything else,” Wilk said. “We’re just running south until we can get good weather. That should guarantee us to play, and it is important that we play.”
Trips as south as Florida should allow the Hoyas to do just that. And as Georgetown begins its season this week, the players have a clear idea of their desired end result for the 2017 season.
“All year we’ve been talking about how we think this is a special group of guys. Our goal is to win the Big East Tournament and
get a berth in a regional for the NCAA Tournament,” Mathews said.
The weekend series against the Wildcats begins Friday night at 6 p.m. in Davidson, N.C.