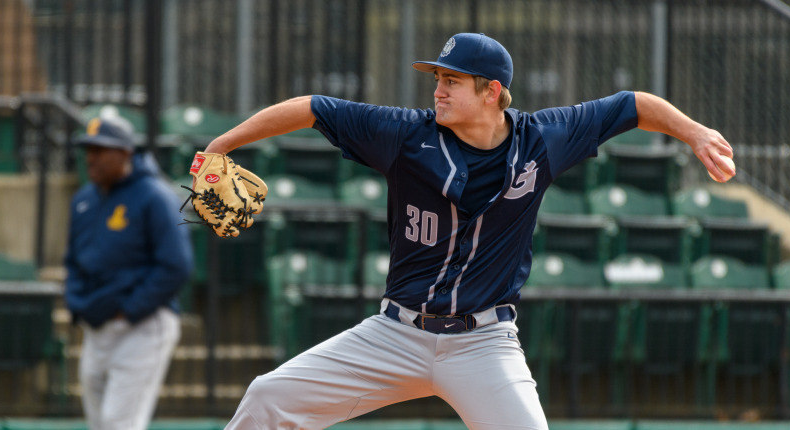 Georgetown’s baseball team traveled to Columbus, Ohio, for a three-game series against Ohio State last weekend, losing the series but achieving one victory.

The Hoyas (6-16-0) started the weekend series with a 13-5 loss. Continuing its tendency to fall behind early, Georgetown trailed 8-0 by the end of the first inning. Yet the Hoyas continued chip away at the deficit, to the tune of three runs in the top of the third.

The Blue and Gray added another run to make the score 8- 4 at the bottom of the fourth. Though the Hoyas continued fighting, the Buckeyes’ (16-7-0) offense was relentless and the deficit never dipped below four runs. The contest eventually ended with a score of 13-5 in favor of Ohio State.

Saturday’s second game of the series saw the Hoyas come out strong for a 5-1 victory, evening the series at a game apiece.

The key to the Hoya victory was a career day from sophomore pitcher Brent Killam. Killam’s performance on the mound saw him strike out 11 batters and pick up the win. Killam went 6 2/3 innings: In addition to his 11 strikeouts, he allowed only a single run.

Senior closer Jimmy Swad polished off Killam’s win with a strong performance over the final 2 1/3 innings, in which he allowed one hit and zero runs.

On the offensive side, the Hoyas were able to capitalize on four Buckeye errors. Georgetown had a 2-0 lead heading into the sixth inning, when the Buckeyes were able to cut the Hoyas’ lead in half. Ohio State had the bases loaded with nobody out, but strong damage control from Killam limited the Buckeyes to their single run.

The Hoyas restored their two-run lead in the seventh, bringing the score to 3-1, before adding two more in the ninth to put the finishing touches on the victory.

In Sunday’s rubber match, the Hoyas lost the series and got their first experience of extra-inning play this season. Junior pitcher Jack Cushing started on the mound for Georgetown in a contest that was low scoring until the very end.

The Hoyas were able to take an initial 2-0 lead in the fourth, off a series of singles. The lead was cut in half during the fifth, but the Hoyas re-established their two-run cushion in the eighth. Georgetown held this two-run lead heading into the bottom of the ninth but saw it disappear in an instant when Ohio State tied the game with a two-run home run that sent the game into extra innings.

In the 10th, the Hoyas retook the lead, scoring a single run to bring the contest to 4-3. Yet the Hoyas failed to hold on to this lead as the Buckeyes scored two runs in the bottom of the 10th to win the game and the series.

Despite the losses, the weekend was highlighted by Killam, who was recognized for his dominant performance when he was named Big East Pitcher of the Week.