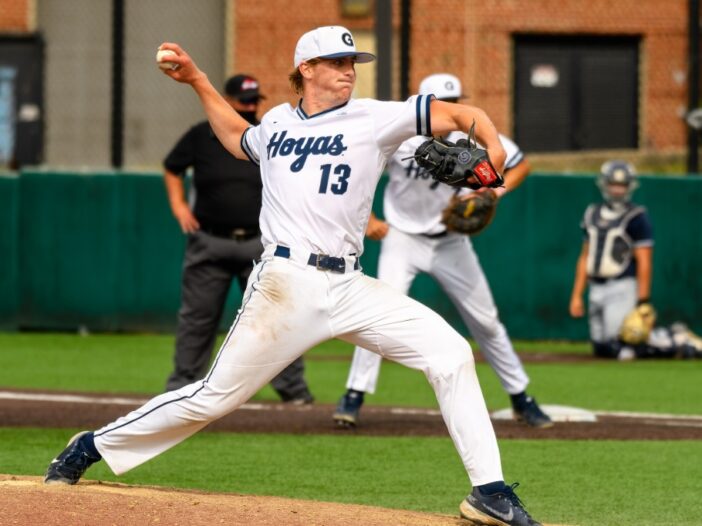 Coming off a disappointing three-game sweep at the hands of Creighton, the Georgetown University baseball team bounced back, winning two games of a three-game series at Butler in Indianapolis, Ind.

With the series win, Georgetown positions itself in 4th place of the eight-team Big East approximately halfway through the regular season.

The Hoyas led with strong starting pitching in the opening game of the series. After allowing a solo home run in the bottom of the second inning, graduate starting pitcher Nolan McCarthy settled into a groove, striking out 11 batters and not allowing any walks over six innings pitched.

McCarthy was named to the Big East Weekly Honor Roll for his outstanding start, securing his fourth win of the season in his ninth appearance.

Although McCarthy pitched well for Georgetown, the Hoyas’ offense struggled to provide adequate run support until the top of the fifth inning. With the game tied 2-2, Georgetown’s offense exploded for four runs, putting the Hoyas up 6-2.

A combination of strong relief pitching from senior reliever Anthony Redfern and eight runs scored across the top of the seventh and eighth, including five of Stern’s career-high six RBIs, gave Georgetown a 14-2 lead heading into the bottom of the ninth inning.

With the game seemingly complete, Georgetown struggled to contain Butler’s final rally. The Bulldogs tacked on six runs in the bottom of the ninth, but senior reliever Miller Freeman was ultimately able to force the final groundout, securing the 14-8 victory for Georgetown.

Coming off of that initial win, Georgetown looked poised to secure back-to-back victories early during the next day’s game. The Hoyas’ offense shelled Butler’s starting pitcher Aaron Barokas in the first inning, jumping out to a 4-0 lead capped by Carapellotti’s double to left field, which drove in 2 runs.

Sophomore right fielder Jake Hyde hit his team-high 14th home run of the season in the top of the second inning, a solo shot to give Georgetown a dominant 5-0 lead.

Just when it looked like Georgetown was running away with the game, the Bulldog offense responded with a monstrous third inning. Senior starting pitcher Carter Bosch allowed a lead-off walk, followed by a double to set up back-to-back RBI singles. Butler’s Scott Jones then hit a three-run home run to left field, evening the score at 5-5. Another RBI single capped off the six run inning for Butler, giving the Bulldogs a 6-5 lead.

Graduate designated hitter Ubaldo Lopez hit a two-out single to even the score at 6-6 in the top of the fourth inning. But Butler responded, scoring in the bottom of the fourth and sixth innings to take an 8-6 lead.

Blum’s solo home run to right field brought Georgetown to within one run. However, it would be the Hoyas’ last run as their bats went cold and Butler’s Lukas Galdoni pitched two shutout innings, securing the Bulldogs’ 8-7 victory and setting up Saturday’s rubber match.

Both teams faced a quick turnaround with Saturday’s early opening pitch for the third game of the series. Georgetown once again relied on strong opening pitching, with first-year Matthew Sapienza allowing just two earned runs over 6 and two-thirds innings pitched.

Georgetown’s offense backed up Sapienza’s stellar outing, scoring two runs in both the fourth and fifth innings to give the Hoyas a 4-1 lead.

Although Butler scored one run in both the seventh and eighth innings, Ficca delivered a clutch two-run double down the left field line in the top of the ninth inning, opening up a 7-3 lead. Ficca was also named to the Big East Honor Roll for his performances against Butler.

Senior catcher Tony Barreca hit a sacrifice fly, driving Ficca home and giving Georgetown its eighth run of the game. The Bulldogs could only muster one run in the bottom of the ninth, giving Georgetown the 8-4 victory.