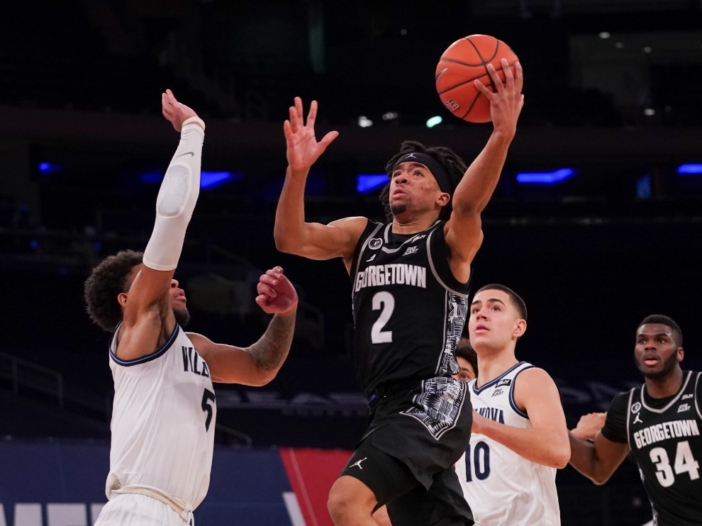 The eighth-seeded Georgetown men’s basketball team stunned top-seeded Villanova in a statement 72-71 win for the Hoyas.

Freshman guard Dante Harris scored the go-ahead free-throw for Georgetown to conclude the back-and-forth game. Thursday’s win looks to be a launching point for the Hoyas as they continue to return to national prominence.

Georgetown entered Thursday’s game against the Villanova Wildcats (16-6, 11-4 Big East) as an eight-point underdog, according to betting odds. Senior guard Jahvon Blair came off the bench again despite currently being one of the leaders for Georgetown in total minutes played. The Wildcats opened the game on a 6-0 run, prompting a quick timeout from the Hoyas.

Graduate guard Donald Carey came out of the timeout with both a 4-point play and a huge second-chance basket in the midst of an 8-0 Hoya run that narrowed the game to just 1 point after slightly fewer than five minutes of play. The Georgetown run then forced a Villanova timeout as both teams exchanged blows.

Both teams then managed to score at the same time for most of the latter part of the first half. However, in the final 3:43 of the first half, the Hoyas exploded with a 7-0 run, as Villanova could not buy a basket.

The Hoyas’ defense held Villanova in check as the Wildcats shot an abysmal 3-19 from the 3-point range in the first half. The Hoyas struggled with turnovers early on, turning the ball over seven times in the first half and leading to 11 points off turnovers for the Wildcats. Georgetown entered halftime up 37-35.

Villanova opened the second half on a scoring run just as it did in the first, as Georgetown struggled to both score and rebound. Following a timeout, Harris led the Hoyas to bring the game to 47-44 with 14:50 left to play. Harris finished with 16 second-half points as he willed the team to victory.

Villanova forwards Jeremiah Robinson-Earl and Jermaine Samuels each put up huge numbers, scoring more than half of Villanova’s points with 26 and 20 points, respectively.

The Hoyas found themselves down 11 points, 61-50, with 8:53 left to play before Carey hit a big three-pointer to bring the deficit back down to the single digits.

The Hoyas then exploded on a 13-1 run, prompting a Villanova timeout with 5:01 to go. With just 5:07 left to play, Georgetown found itself up 63-62 as Villanova could not convert on multiple trips to the free-throw line.

Free throws were truly the difference in the game. With the game tied at 70, Robinson-Earl advanced to the free-throw line following the fifth and final foul on sophomore center Qudus Wahab that sent Wahab out of the game. Robinson-Earl only managed to make one of his two shots, leaving the score at 71-70 with just 19 seconds left to play.

Ewing called a timeout to draw up a play that would decide the game. The Hoyas turned to Harris. Having only played seven minutes in Georgetown’s opening game, Harris’s emergence has been the differentiating factor down the stretch. He has proven himself to be the point guard of the future and is set to terrorize the rest of the Big East for the next three years.

Harris exploded toward the hoop and was fouled by Robinson-Earl, going to the line with just four seconds left. Harris, entirely unfazed by the pressure, sank both free throws. Without any timeouts, the Wildcats were forced to shoot a difficult three-pointer as time expired. As the buzzer sounded, the scoreboard read 72-71 and Georgetown prevailed.

Undoubtedly the biggest win of Ewing’s tenure, Georgetown has been remarkable since a temporary pause for COVID-19 in January and is now 6-4 since the break; the Hoyas were on a five-game losing streak before the break. Everyone in the program deserves credit for their effort this season. No one expected the Hoyas to advance to the Big East semifinal before the season began, yet here they are, and they are not done yet.

“We are coming back,” Ewing said in a postgame press conference. “Our future is bright.”