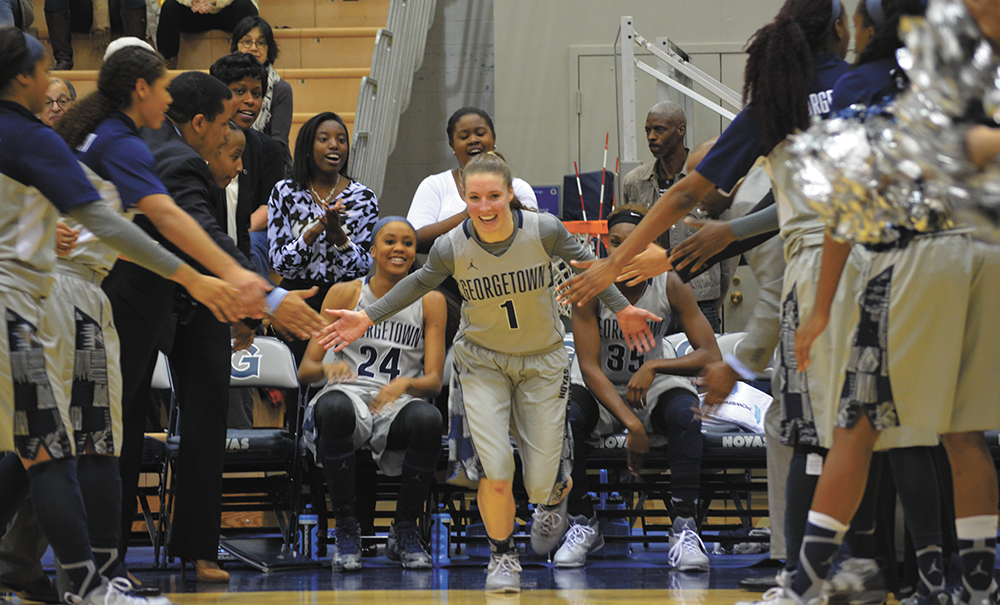 The Georgetown women’s basketball team enters this season with a unique advantage: the team did not lose any players to graduation after last season, returning the six players who played more than 20 minutes per game and adding two freshmen and two transfers.

Without any seniors on the roster last year, the team lacked experience and established leadership in Head Coach Natasha Adair’s first season as the team’s coach.

“If you look at it as a senior and having a new coach from last year, it makes you feel like a freshman again because you’re all learning the system all over again,” senior forward Ki-Ke Rafiu said. “But now we’re seniors, and we know how it goes. We know the coaches, and the coaches know us.”

This year’s team has five seniors, including Rafiu, on the roster. Suddenly, the Hoyas are one of the most experienced teams in the Big East, an attribute Adair believes will benefit the team.

“We went from [being] one of the kind of younger teams to the oldest team. But experience is the best teacher,” Adair said. “You think about now, they have the experience on and off the court.”

Adair expects the players’ familiarity with one another, whether from playing on the team last year or from the summer training for the newcomers, will bring the roster closer together.

“We’ve been around each other and we know each other,” Adair said. “I think that will determine how well we do. We now can finish each other’s sentences, and that wasn’t the case a year ago, because we were just still trying to learn each other.”

Adair cited the team’s summer trip to Italy and France as a time for the players to improve relationships with each other.

“The biggest thing for us, I think, is just the experience that we had overseas this summer, and how we bonded as a group,” Adair said. “That was the best trip. It was at the right time. We got to go overseas and have success.”

The benefits of the trip to Europe go beyond group bonding and on-court experience. Adair said it also changed the mindset of the team after a tough end to the 2014-2015 season, when the Hoyas fell by three points to the Xavier Musketeers in the opening round of the Big East tournament. The competition over the summer helped put that disappointment further in the past.

Adair enters her second season as the team’s head coach; when she accepted the role as head coach last year, Adair became the third head coach in three years for the Hoyas. The lack of continuity in the coaching staff has hindered the team’s success, and the players look forward to seeing how successful the team can be now that the coaching position has stabilized.

“Just having a stable coach … having the same type of coaching technique, the same team — we only have two freshmen — it’s good in my situation because, as a senior, you don’t have to teach as much,” senior guard Katie McCormick said. “You know the offensive and defensive schemes as much as you can. It’s just great to have a pattern to know what you need to teach and what to relay to the freshmen.”

Adair recognizes that her return will have a stabilizing impact on the team, which she believes will lead to better results for the program this season.

“I think you improve already going into year two because you have pretty much the same team back, you’re adding leadership, you’re adding experience, you’re adding more depth,” Adair said. “I just feel like we’re in a good place to compete and to really be successful.”