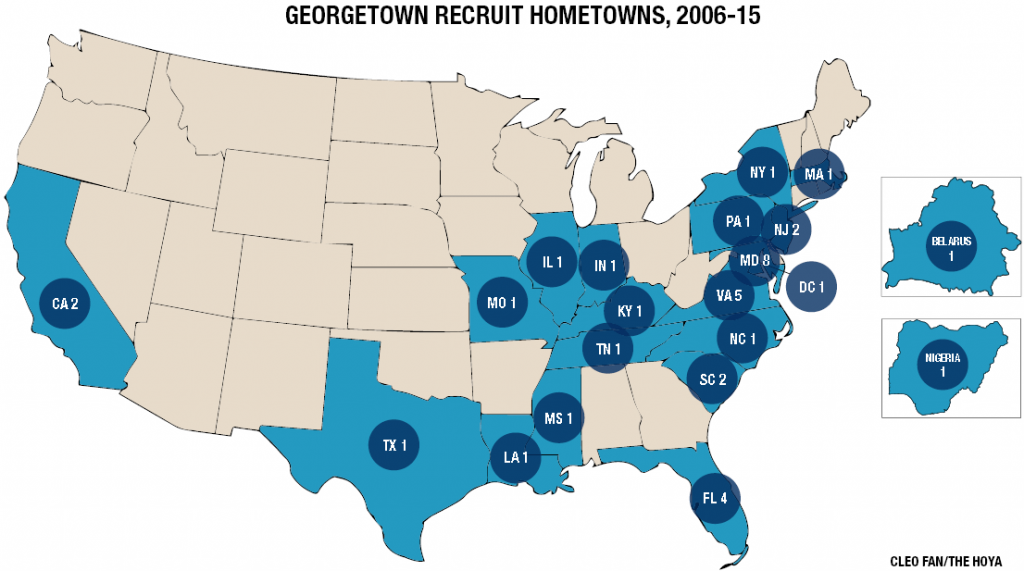 The 6-foot-3-inch guard had just finished his junior season at St. Anthony’s High School in Jersey City, N.J. He averaged 13 points per game, led his team to a 28-2 record and was named a Second Team All-State selection. In addition, Mosely had a 4.2 GPA and ranked in the top of his class at St. Anthony’s.

As he moved closer to choosing a college, though, he faced a dilemma.

“My parents and I, we kept going back and forth, deciding between whether I wanted to go to a dominantly academic school or a dominantly basketball school,” Mosely said.

When Georgetown offered Mosely a scholarship, it gave him the best of both worlds, and he committed to play for Head Coach John Thompson III and his staff starting in fall 2016.

“When Georgetown came in it was the perfect fit, because they have both high-level academics and basketball,” Mosely said.

In many ways, recruiting is the foundation of any college basketball program. It is difficult to predict how a high school player will develop during his time in college, but if coaches can bring in talented players, they can create a foundation for success. However, the recruiting process is not always as straightforward as it was with Mosely.

Thompson and his three assistant coaches — Kevin Broadus, Tavaras Hardy and Kevin Sutton — evaluate hundreds of prospects around the world in each recruiting class.

“The majority of it, at least from my vantage point, is done when we are not playing games,” Thompson said. “It’s harder for me to get away because we’re practicing and playing games, whereas it’s easier for an assistant.”

When the coaching staff identifies a prospect that it is interested in, it reaches out and begins to communicate with the player.

“The first time I spoke to Coach Thompson was on the phone right before my senior year started, I believe,” junior forward Reggie Cameron said. “He just said that they were interested in me and stuff like that. I think it was Coach Broadus that saw me at a Nike camp down here, I think a week earlier.”

According to Thompson, whichever assistant coach identifies a prospect of interest will usually take the lead in recruitment. In addition, Thompson himself is involved with all of the prospects. Thompson and his staff frequently attend games and practices around the country as they pursue their desired talent.

Scott Willard, who coached current Georgetown sophomore forward Isaac Copeland during his junior year of high school at the Miller School in Charlottesville, Va., said Thompson and his staff invested a lot of time in Copeland’s recruiting process.

“They attended a lot of our practices and games; they recruited him hard. We played in a couple of events in D.C., as well, given that we’re not too far, it was not a bad trip for them to really make an effort,” Willard said.

“It’s not the first time I’ve ever dealt with them before. I mean, I had some kids before I got here that were at my old school at Benedictine; I dealt with … them substantially before, so it wasn’t the first time. It’s always been enjoyable,” McAloon said.

If there is mutual interest between a prospect and the coaching staff, the two sides work to set up a visit to campus. According to Thompson, the staff aims to show each prospect a normal weekend at Georgetown.

“I think it’s important, good, bad, ugly, right, wrong, that once they leave here they have some semblance of what their experience is going to be like,” Thompson said.

Hoya Hoops Madness has stood out as an important event for recruiting visits. Freshman center Jessie Govan, freshman forward Marcus Derrickson and freshman guard/forward Kaleb Johnson all attended Hoya Hoops Madness in 2014. In addition, Mosely, who is currently the only prospect who is committed to Georgetown in the Class of 2016, attended this year’s event.

Thompson and his staff highlight a few key aspects of Georgetown and its men’s basketball program when recruiting.

Many recruits are particularly attracted to Georgetown’s rich history of success in men’s basketball and are aware of Georgetown’s former standouts, including Dikembe Mutombo (COL ’91) and Alonzo Mourning (COL ’92).

“The history of the school is just amazing,” senior center and co-captain Bradley Hayes said. “You know, being a big man coming to a big-man school with the history of Dikembe, Alonzo, all the greats, I wanted to follow right in line and I felt like this was the best place to do it.”

In addition, many of Georgetown’s recruits are attracted to the university’s strong academic reputation.

“The academics, one, obviously,” Cameron said when asked what attracted him to Georgetown. “The university as a whole is second to none. Basketball and academics, you know, you can’t find a lot of things to complain about.”

THE LURE OF THE PROS

According to Thompson, Georgetown’s rigorous academics are actually a deterrent for certain recruits.

The NBA has become a billion-dollar industry. Superstars like LeBron James, Stephen Curry and Anthony Davis are ubiquitous, constantly appearing in commercials, Vines, video games and Twitter feeds. The appeal of the bright lights of the pros is stronger than ever.

As a result, ever since the NBA implemented a requirement that players spend at least one year after high school before entering the NBA Draft, the “one-and-done” has dominated headlines, and certain recruits are singularly focused on moving onto the pros.

Superstars like John Wall, Kyrie Irving and Anthony Davis used college basketball as a one-year steppingstone to the NBA, seemingly blazing a trail for professional success at an early age. However, although players like Wall, Irving and Davis draw attention for their success, there are far more examples of players who entered the draft early only to find that success in the NBA was far from guaranteed.

“Now I don’t know the exact numbers … but how many kids have really been one-and-done? Big picture, it’s a small number,” Thompson said. “But what that does is those guys garner so much attention from the press, from the media, that the following classes, even kids that have no shot, they aspire for that.”

Despite this trend, however, Thompson has not sent any players to the NBA after only one season in his time at Georgetown. Otto Porter Jr., Jeff Green (COL ’12), Roy Hibbert (COL ’08) and Greg Monroe are examples of players Thompson has coached who have gone on to professional success. Porter and Monroe stayed at Georgetown for two years each, Green stayed for three years and Hibbert stayed for the full four years. However, the team’s lack of one-and-done players has not been the result of a conscious effort by Thompson and his staff.

Georgetown players also have NBA ambitions, but Thompson and his staff look for players who are also focused on their development off the court.

“I have a locker room with 12 or 13 guys that want to make it to the NBA,” Thompson said. “But they also appreciate Georgetown and everything Georgetown has to offer and understand that while you are working and want to grow your game, you want to grow your mind also.”

Georgetown recruits from all areas of the country and even internationally.

“That’s the power of Georgetown and that’s the power of our tradition and our history, and also where we stand now in the Big East. We’re able to recruit nationally [and] globally, so we do that,” Thompson said.

However, Thompson and his staff tend to bring in a significant number of prospects from the D.C., Maryland and Virginia area. In the last 10 recruiting classes, Georgetown has added 38 new players. Thirteen of them, including Johnson, Derrickson and Campbell, have come from the DMV area. Some prospects prefer to attend college relatively near their hometowns, which adds to the attraction of Georgetown.

“I wanted to stay around in the DMV just to stay close to my parents and my family, and I just felt comfortable here. That’s why I chose it,” Campbell said.

Georgetown also brings in prospects from all areas of the country. In the last 10 years, the Hoyas have recruited players from 19 different states and three different countries — the United States, Belarus and Nigeria. That list includes eight players from Maryland, five players from Virginia and four players from Florida.

AN AREA OF SUCCESS

ESPN ranked Georgetown’s Class of 2014 as the seventh-best recruiting class in the nation. In addition, ESPN ranked the Class of 2015 as the 26th best in the country. Of the 13 players on the Hoyas’ current roster, eight were ranked in ESPN’s Top 100 recruits in their respective classes coming out of high school.

However, Thompson is more concerned with how players will fit in at Georgetown.

“Those rankings, they are what they are, but I don’t think you should put stock in who you recruit solely based on numbers as opposed to who you think can help you, come in and contribute,” Thompson said.

Last season, four freshmen — Copeland, Campbell, forward Paul White and guard L.J. Peak — played in all 33 of Georgetown’s games, each playing at least 13 minutes per game. The Class of 2014’s immediate impact demonstrates the importance of recruiting in college basketball, and Thompson hopes that he and his staff can continue that success in the future.

“As a coach, every year, you want to get everyone you want to get,” Thompson said. “But that doesn’t always happen. I think for the most part, we’re getting some good student-athletes in here. Can you always say, ‘I’d love for it to be better?’ Absolutely. But I think we’re doing okay.”