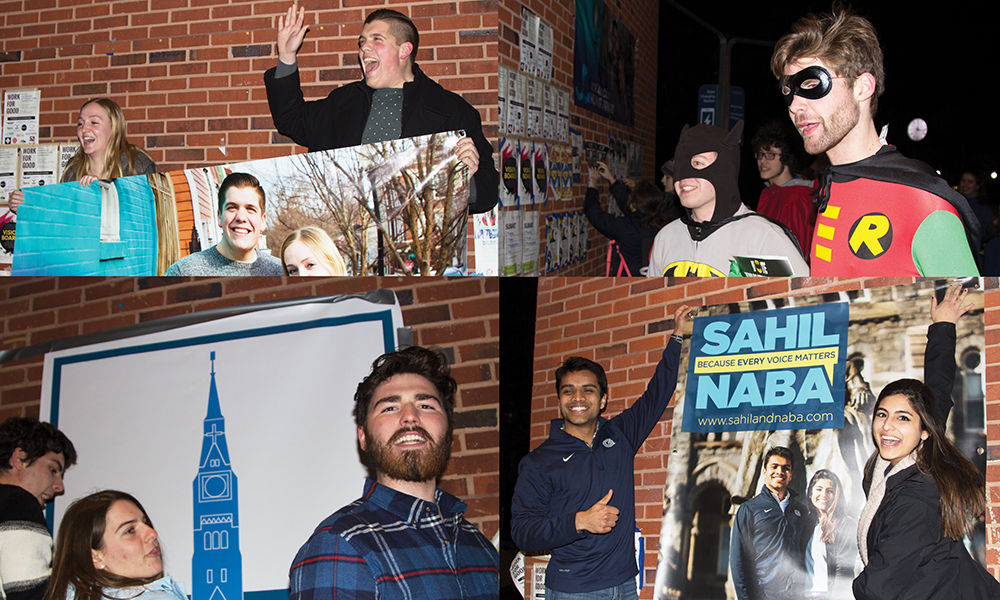 In the shadow of almost every Georgetown University Student Association presidential candidate, there is a campaign manager striving to launch the ticket to victory on Feb. 22’s election day.

Tasked with communicating their candidates’ platform within the two-week period dictated by GUSA campaign rules, campaign managers devote countless hours to a role frequently overlooked by the student body.

This season, three of four official tickets – Logan Arkema (COL ’20) and Jonathan Compo (COL ’20) have decided to manage their own campaign – have designated a campaign manager to advocate for their vision for Georgetown’s student government. From selecting slogans to strategizing social media campaigns, these students are working behind-the-scenes to create — and, at times, dispel — popular images of their candidates.

Starting over winter break, Andrew Straky (COL ’20) spent hours planning a platform with his best friend Josh Sirois (SFS ’20), who is running for the GUSA presidency with Casey Doherty (COL ’20) as his running mate.

Drawing from his experience as high school student body president, Straky said he strived to create a sense of authenticity in the candidates’ message of “moving forward.”

“We sat down with the candidates, asked ‘What do you want to do, what are you going to change and how are you going to do it?’” Straky said in an interview with The Hoya. “We wrote everything down, we recorded it and we took quotes exactly from what they said and built the message from that. We really want to make sure that this isn’t a manufactured message or a fake message. We want it to be authentic and actually come from the candidates themselves, not the team of people.”

Straky said the biggest challenge confronting the Sirois-Doherty ticket is combatting the perception that the candidates are insiders who belong to the GUSA establishment.

Sirois is a GUSA senator who has served on the Finance and Appropriations Committee, the senate body that appropriates the Student Activities Fee to student groups, while Doherty has served on GUSA’s Federal and D.C. Relations committee.

“We have to be conscious of the fact that the other tickets are going to try to frame Josh and Casey as the established, as people who are in GUSA and are part of the problem,” Straky said. “We don’t view that as a bad thing. We don’t think you should have no GUSA involvement before running for the leadership. If you really want to change it, you have to know how it works, what works and what doesn’t.”

Aaron Bennett, campaign manager for Sahil Nair (SFS ’19) and Naba Rahman’s (SFS ’19) presidential bid, has taken the opposite tactic: His campaign capitalizes on the candidate’ status as GUSA outsiders.

Bennett was drawn to the campaign by Rahman, his friend of four years, after the pair jointly organized the National Collegiate Security Conference, a meeting of collegiate Model United Nations teams, last year.

“For years we seem to have a student government that is very insular, that is run by a select group of people and finds trouble breaking out of its bubbles,” Bennett said in an interview with The Hoya. “I think the perspective that Naba and Sahil bring, and that I bring as well, that message of breaking GUSA out of its shell and getting more people involved in the process, was really appealing to me.”

For weeks, the campaign struggled to encapsulate the entire Nair-Rahman platform into a single tagline, scrapping so many ideas along the way, including “Let’s write this together,” that they nearly ordered their banner too late to hang in Red Square for the campaign’s launch Feb. 8.

Ultimately, the team settled on “Because every voice matters,” a tagline Bennett said captures the candidates’ view that for too long student government has been by GUSA, for GUSA.

“As the campaign manager, you have to ask those tough questions of, ‘Is this something you want to move forward with?’” Bennett said. “The tagline is one of the most critical parts of your brand. At the end of the day, the message needs to resonate with voters, the people.”

Similarly, Charles Edward Johnson III (COL ’19), deputy campaign manager for the presidential bid of Hunter Estes (SFS ’19) and Richard Howell (SFS ’19), said the campaign’s focus on inclusivity was the impetus behind the “It’s About You” slogan, which aims to express a platform that is built around on students’ needs.

“Although this sounds platitudinous, it’s not about filling resumes or trying to further our own objectives,” Johnson wrote in an email to The Hoya. “Student government should be for the students first, and I hope that people recognize this in the coming weeks.”

Nevertheless, Johnson said one of the main challenges on the campaign was dispelling preconceived notions about his candidate’s commitment to inclusivity, given their previous involvement in Georgetown University College Republicans.

“While it may be easy to put labels on candidates due to prior knowledge, as both candidates have served on the board of College Republicans, we want to prove that we are accepting of all students here,” Johnson wrote in an email to The Hoya. “We on this campaign respect the dignity and identity of all students, faculty, and staff, and hope to foster a campus of unity.”

Johnson, who works under campaign manager Claire Smith (COL ’19), said the Estes-Howell campaign also navigated other obstacles, including the removal of  its banner from Red Square and a shorter timespan to plan the campaign’s strategy relative to that of other candidates.

Claire Smith (COL ’19), campaign manager for the Estes-Howell campaign, could not be reached for comment.

“We have been planning the campaign for a shorter time than others, but we can mobilize and reach out to wonderful communities across campus. By working together, we will have a big impact on this campus,” Johnson wrote. “Unfortunately, we saw the banner come down in Red Square, but this does not let the campaign down or set a bad omen. Resilience is a necessary quality to have in politics, and that this campaign’s resilience, optimism, and tenacity must not be overlooked.”

Nevertheless, Johnson said the central plank of the Estes-Howell ticket, service, shines through in the campaign. This theme, along with his friendship with the candidates, was what drew him to join the campaign in the first place.

“I think that is definitely our core tenet,” Johnson said. “We have had a card-making event in Sellinger where we made cards for hospitalized children around D.C., as well as handed out messages of kindness during midterms. Georgetown can be an incredibly stressful place, as we all seek to be perfect and successful, but we also want to be a community that supports each other, regardless of competition.”

Unlike the three other tickets, Logan Arkema (COL ’20) and Jonathan Compo (COL ’20) have eschewed the role of a campaign manager in favor of a nonhierarchical campaign structure modeled after Arkema’s experiences with the Georgetown Solidarity Committee, a worker’s advocacy group.

This structure is just another flourish on an already unconventional campaign, which features Arkema and Compo adopting the personas of fictional comic book characters Batman and Robin.

Although Arkema hopes his satirical candidacy provides “comic relief” in the presidential race, he says his campaign is belied by a sincere message: GUSA is a body that takes itself too seriously.

“There are a lot of well-meaning people in it, but there are also a lot of people in it who seem to only want a job for their resume and portray themselves in a more serious [way] than is becoming of a student government that has no binding authority on pretty much anything,” Arkema said.

In the run-up to the election this week, Arkema stressed the factors that set his campaign apart: a little bit of disruption and a lot of fun. Still, he acknowledged that his intention was never to win the election, and that remaining in character can sometimes induce strain, particularly on his voice.

“I felt like the campus could use something a little bit different,” Arkema said. “I’m not here to win. I’m here to have a fun time. This has been my creative fun project for me.”

But the Arkema-Compo campaign shared at least one characteristic with the three other tickets: its emphasis on opening up GUSA to outsiders.

“People who don’t share the identities that we do need to be the ones who are making the decisions and having greater influence in GUSA,” Arkema said. “People appreciate realism and frankness, and breaking the Georgetown bubble that we are tempted to create for ourselves.”