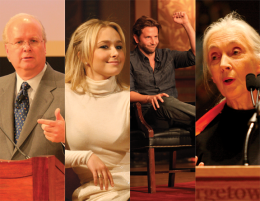 Former Libyan leader Muammar al-Gaddafi and heartthrob Bradley Cooper (COL ’97) have at least one thing in common: The Georgetown University Lecture Fund has sponsored both of them to speak on campus.

Last year, Lecture Fund helped organize over 50 speakers to share their views on politics, current events, life experiences and more. But locking down these figures takes much more than a few phone calls.

From picking up a Hollywood celebrity at the airport to striking just the right amount of conversation with a prominent world leader, the responsibilities of the 14 Lecture Fund associate members vary across the board.

And associate membership in an organization with such a high-profile mission comes with stiff competition. This semester, 35 students applied for five available positions.

The personal interaction between the Fund’s associate members and the speakers allows the students to explore interests that they may not pursue in their academics or other extracurricular activities.

“Lecture Fund has a very dear place for me, mainly for it allows me to bring my ideas into reality and for it is a great platform to stay in touch with all speaking events that happen on campus,” said member Ceyda Erten (SFS ’13), who organized the TEDx Conference on campus last semester. “As a fan of TED Talks, I was able to put together a team of both Lecture Fund members and other members of the Georgetown community and initiated the TEDx Georgetown project.”

In order to conceptualize the arrivals of speakers like Karl Rove and Jane Goodall, Lecture Fund takes internal suggestions and solicits a wide range of speaker ideas from an array of organizations on campus. The Lecture Fund board then reaches out personally to speakers, whether through agents or personal connections. After making contact, the potential proposals are presented to the members of the group, which then vote on whether or not to allocate money from the fund for the proposed event.

The Student Activities Commission earmarked 17 percent of its total budget for Lecture Fund, or $19,067, for this semester. With an average price tag of $647 per lecture, Lecture Fund uses the SAC funds to pay for speaker fees and venues, which range from less than $100 to over $5,000.

On top of the funding, the group must solicit co-sponsorships from other student groups in order to cover additional costs like food and reception needs. Lecture Fund Chair John Gwin (SFS ’12) said they often reach out to groups that back the content of the speech or have a stake in being affiliated with such speakers.

“I guess we’re opportunistic in the sense that we’ll partner with any other group that is interested in covering the costs,” he said.

Gwin also noted that the timeline for securing a speaker and organizing the lecture depends heavily on unpredictable factors.

“It’s wildly variable. Some happen in two to three weeks, … but it could be much, much longer,” he said. “Usually, what takes the most time is if the speaker has a contract they need to have signed. That’s the most common factor. Other things are idiosyncratic or unpredictable. Speakers’ plans change.”

Once guests agree to speak at Georgetown, Lecture Fund focuses on the planning of the event, which can often be as complicated as the initial agreement.

“Booking these speakers is as much about logistics as ideology,” Gwin said. “Given the numerous details that go into the execution of the events, it is no wonder that any number of [things] can go wrong.”

According to Evans, the group dynamic surrounding the planning of events may even be better than the events.

“My favorite part of the Lecture Fund is, by far, working with the associate board to conceptualize, plan and execute events,” he said. “We have such an amazing group of brilliant and diverse people, and to hear their ideas and share my own with them is both an honor and incredibly rewarding.”

“Because every lecture event has to be approved by the Lecture Fund, we also get to hear about all the exciting speaking events that a variety of student organizations put together,” she said. “I learn a great deal from hearing about what happens on campus, and I have attended many events that other student groups have put on. Helping those organizations advertise their events to a greater student audience allows me to give back.”

While Lecture Fund is often credited with bringing primarily political names to campus, the organization tries to hold events that appeal to students whose interests lie outside governmental affairs.

“When we think about the kinds of people that come to speak at Georgetown, we usually think of people from the Washington political arena, so it’s refreshing to have someone like Michael Moore come,” Andrew Markel (SFS ’15) said. “I think we have a pretty diverse range of speakers here.”