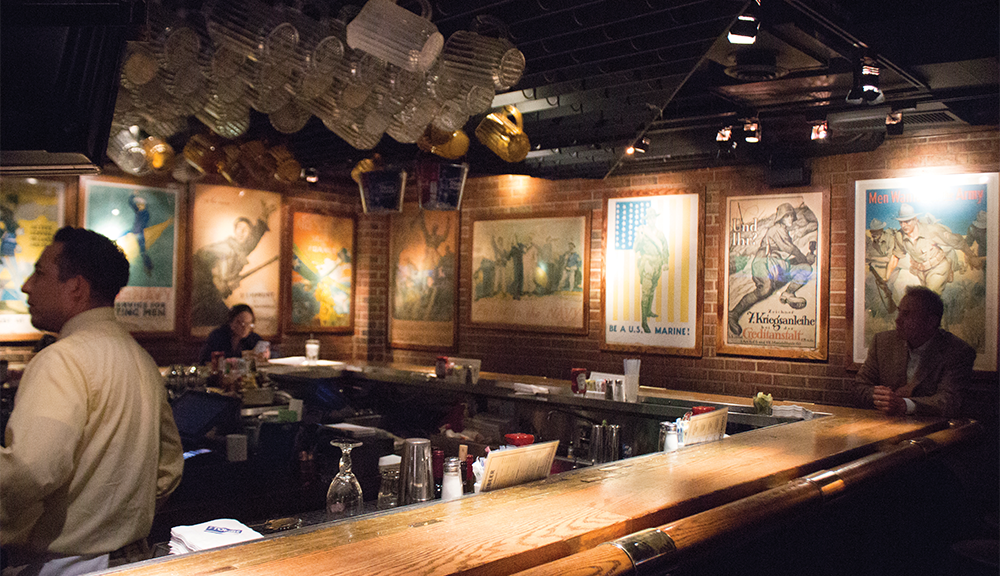 Few restaurants have had as large an impact on the Georgetown community as The Tombs. There, men have proposed on bent knee, alumni have reunited and students have gathered for trivia nights, dance parties and 21st birthday celebrations. From its opening in 1962 to its role in the 1985 drama “St. Elmo’s Fire,” The Tombs is quintessentially Georgetown.

Yet beyond the burgers, booze, serenades and sports games, The Tombs is not just a favorite restaurant for Georgetown residents. It is an archive — a treasure chest brimming with works of art. Mainly sports-related or historical in theme, these pieces of art serve not only as conversation starters, but also as opportunities to explore Washington, D.C.’s history.

With life constantly charging ahead, there often seems to be little motivation to stop and revisit the past. The Tombs has worked to counter disinterest by featuring works of art that encapsulate the Georgetown spirit. Its dozens of illustrations and posters of 20th century propaganda remind us of our strength in unity, encouraging us to come together as a community.

A Vision Comes to Life

When the late Richard McCooey (C ’52) founded The Tombs, he had a vibrant vision: build a pub that would keep student celebration close to Georgetown University’s campus and bring all members of the community together. Both a literature and history buff, Richard McCooey wanted the pub’s decor to be rustic but timeless.

“He wanted it to feel like it had always been here,” Karen McCooey, Richard McCooey’s widow, said in an interview with The Hoya.

To create that feeling, Richard McCooey was involved in every step of the restaurant’s development, designing the layout, overseeing the construction and even personally installing the art. The custom brick floor was inspired by a church in western Virginia. For the booths, inspired by the seating he saw in a bar in Princeton, N.J. he selected authentic leaded glass from a building in D.C.

Richard McCooey was a true lover of art, and he wanted the restaurant’s lighting to highlight the pieces he had selected as well. Some of the light decorations are artwork themselves; the lanterns on the walls are original English lanterns from the 1800s.

Every piece, whether practical or purely aesthetic, evokes nostalgia and an appreciation for history.

“Tombs has a uniting atmosphere because the execution is united,” Karen McCooey said.

Richard McCooey began collecting his art at age 21 after falling in love with a painting by Frederic Remington, a 19th century American painter and illustrator. By the time he started work on The Tombs, Richard McCooey had compiled an arsenal of artwork dating back to the early 1800s. He believed that people should always buy what they love, and he wanted to share what he loved with Georgetown.

Many of the illustrations were produced on limestone slates, said Scip Barnhart, a professor in Georgetown’s art and art history department. During the process, known as stone lithography, water and ink are manipulated to transfer an image from stone to print. The result was a number of beautiful graphic prints that now adorn the walls of The Tombs.

Each piece chosen for The Tombs is meant to exude the English spirit of camaraderie and sportsmanship that Richard McCooey grew to value during his time as president of the Yard, the predecessor to the Georgetown University Student Association, as well as during his two years in the Air Force. These values were to be an integral component of The Tombs, and they are values that live on through the artwork today.

“You’re getting the soul of an individual here,” Karen McCooey said. “There will never be another Tombs anywhere.”

To preserve both Richard McCooey’s legacy and the value of the artwork, The Tombs uses museum-grade framing techniques. The pieces are placed on acid-free paper and mats, and then placed behind ultra-violet protecting glass. Because all the art is original, not replicas, they are mounted using hinges rather than glue or tape.

In the 1800s, when many of the works of art in The Tombs were created, illustrators were considered lesser artists because they worked to meet assignments, and not from the heart.

“Illustration is a very important form of art, but it used to be a step below,” Barnhart said.

Little did these illustrators know that over a century later, their works would be at the center of dinner conversations for students and Georgetown residents alike.

The success of these prints stems from their ability to provide snapshots of different times and places.

One of The Tombs’ most famous pieces is a Naval recruitment poster by Howard Chandler Christy from 1917, which reads, “I Want You for the Navy.”

“That’s, of course, a double entendre. It’s sexy, it got your attention, and it got the Navy a lot of attention,” Barnhart said.

Although the prints were not intended to be catalysts for artistic discussions, Richard McCooey had the ability to look beyond the illustrations’ practical purposes to see them as true masterpieces, gradually bringing other people to appreciate as well.

“Richard was born with a level of taste that most of us only aspire to,” Karen McCooey said. “His spirit is in the prints.”

Beyond the Georgetown Bubble

Although political administrations, neighborhood dynamics and student bodies have changed since The Tombs opened 55 years ago, the artworks at the restaurant have remained an integral part of its atmosphere.

“[The artworks at The Tombs] reminds us of the turn of the century when life was different, but they still had an enthusiasm for life,” Barnhart said.

Popular artistic styles may change, but art has always had the power to communicate the beliefs and passions of people.

A Legacy of Love

In establishing The Tombs, Richard McCooey hoped to build a gathering place that would withstand the test of time. So far, both Karen McCooey and Barnhart agree that he was successful in his mission.

“Ultimately, when you come in here, the vibe that’s being screamed is ‘I love you’ and ‘I’m cheering you on,’” Karen McCooey said.

The preferences of the baby-boom generation have been pushed to the wayside as millennials have started to envelop the art industry.

“You guys are taking over, and you’re going to change things to what you like,” Barnhart said. “That’s how art goes.”

Yet, just like our generation still listens to Elvis and Michael Jackson, Barnhart predicts that an appreciation for the artwork in The Tombs will remain.

Although Richard McCooey sold The Tombs to Clyde’s Restaurant Group after a decade of ownership, his legacy lives on through the restaurant. Karen McCooey herself carries on her late husband’s legacy by sharing their love of art with her clients through her work as an interior designer and art framer. As for the items from Richard McCooey’s collection not currently displayed at The Tombs, Karen McCooey plans to keep his collection together, and she hopes to one day open a museum to honor his memory.

Ultimately, at The Tombs, the goal of art is to bring people together.

“No matter what it is, art communicates,” Karen McCooey said. “You didn’t have to know Richard [McCooey] or know the art to feel transported to a different place in time.”