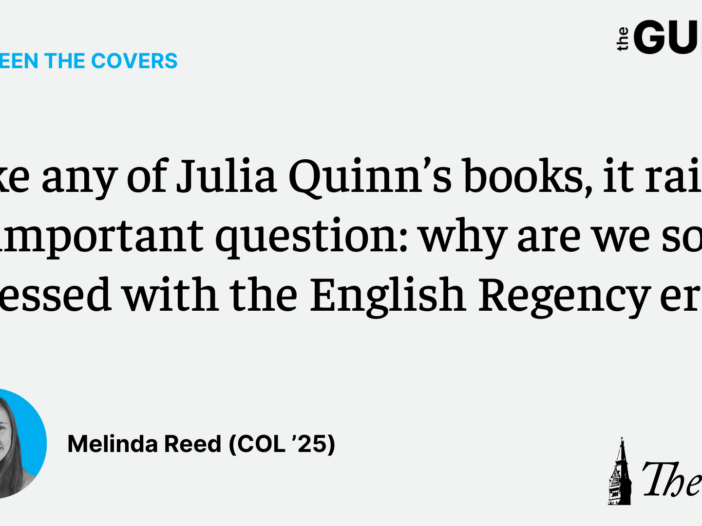 A show that is fun, colorful and something you will definitely regret watching with your mom. You guessed it: The second season of the hit show “Bridgerton” premieres March 25.

Based on a series of novels by Julia Quinn, the show centers around the Bridgerton family. The original books are set in Regency England, just like the Jane Austen classics “Pride and Prejudice” and “Emma.”

Each season of the show centers on the love story of one Bridgerton child, with the first season drawing on Quinn’s “The Duke and I” and featuring Daphne Bridgerton’s journey through her first courting season. With Daphne’s happy ending, we now turn to the second — and, in my opinion, best — novel of the bunch: “The Viscount Who Loved Me.”

The viscount, Anthony (Jonathan Bailey), is the eldest of the Bridgerton clan and bears the responsibilities of adulthood and the viscountcy left to him by his late father. The position of power comes with a price. Anthony must prioritize family affairs in making an advantageous match, but he would rather just go through the motions unfeelingly: find an unmarried woman, court her, propose, marry, have children, die. But just as he’s executing this plan, it all goes awry thanks to his chosen bride’s sister.

The bride-to-be is Edwina Sheffield (Charithra Chandran), a sweet, innocent beauty with a cynical and less charming sister, Kate (Simone Ashley). Kate sees right through Anthony’s plan to get and forget a wife, but her attempts to get in the way of their relationship only lead her to spend more time with Anthony. The inevitable flicker of attraction forms despite their best efforts.

It’s a classic entry in Quinn’s long-running series for a number of reasons: mainly, characters that feel lived-in, a romance that’s natural and a heroine who’s relatable to her audience. But like any of Quinn’s books, it raises an important question: Why are we so obsessed with the English Regency era?

Although many respond with an immediate answer — “the clothes” — I vehemently disagree. Regency-era dresses are the kind of outfits designed for pregnant actresses in sitcoms who are trying to hide their pregnancy when it doesn’t fit with their character arc.

What truly makes “Bridgerton” so interesting is, well, sexual repression. There’s something about the fact that sex was such a taboo in those times that makes the stories inherently sexual. It’s like if I held you at gunpoint and said you couldn’t think about parrots — you’re going to think about parrots.

I’ve brought up Jane Austen once already, but that’s because she deserves a lot of credit for creating our fascination with that time period. Her most famous hero, Mr. Darcy of “Pride and Prejudice,” could win awards for his sexual and emotional repression. His method of flirting is staring at the girl he likes from across the room and insulting her family’s inferior status. (Men, take notes).

Imagine for a moment that you are Austen. You’re single — and therefore presumably a virgin — and you live in a time when people just pretend that sex doesn’t exist. How do you write sex and sexual tension? Dialogue. Also, Regency dancing. Go back to “Pride and Prejudice” and read every dialogue and dance between Elizabeth Bennet and Mr. Darcy as a stand-in for a sex scene, then go watch the 2005 adaptation to overanalyze the famous hand-flex scene in all its glory.

In writing sex as an intellectual meeting of the minds, Austen tied respect and intimacy together in a way her society couldn’t have imagined. Of course it still resonates today, 200 years later. Her audience — mostly female — and Quinn’s audience want to exist in a world where sex comes with mutual respect and equality.

It helps to understand Kate and Anthony in “Bridgerton” as one couple in a long line of mutton-chopped heroes and money-strapped heroines. Like so many rom-com couples, they are reincarnations of Lizzy and Darcy from “Pride and Prejudice,” the finest two dorks in literature to ever accidentally fall in love. Recreating this dynamic is not lazy writing, but rather an homage to the late great Austen, who sat down and said, “You know what’s sexy? Attractive, single men with money. Also, equality.”

Kate and Anthony are Quinn’s finest nod to Lizzarcy, or Darcabeth, or whatever you would like to call them. (Fitzlizziam!) They’re at odds, but through their disagreements find genuine respect for the other’s intellect and integrity. “The Viscount Who Loved Me” shows this in its Austen-esque glory with the addition of the actual sex scenes that would make the ghost of Austen — at least in my theories — exceptionally proud.

Well, Jane, the pseudo-Lizzarcy will be getting its fair share come March 25. Until then, her ghost will have to be satisfied with “The Viscount Who Loved Me” and dirty “Pride and Prejudice” fanfiction.

Melinda Reed is a first-year in the College. Between the Covers appears in print and online every other week.