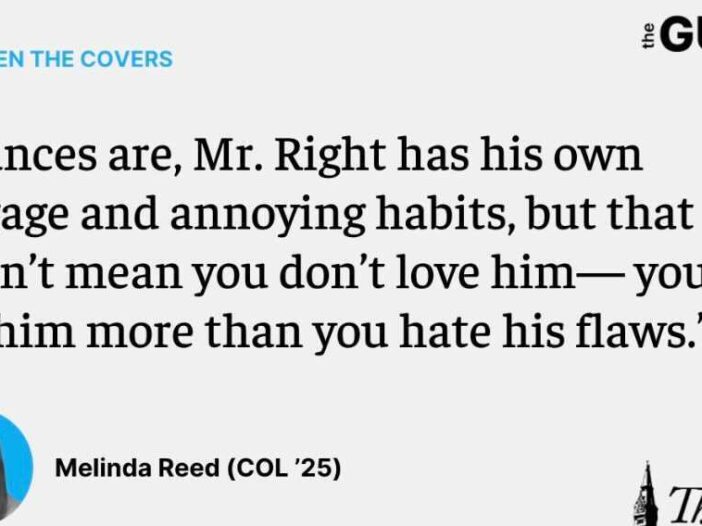 Given my dedication to arguing for romance’s legitimacy as a genre, it pains me to criticize it, but I am afraid I have to because literary men are unicorns.

They shoot rainbows out of their eyes and hearts out of their mouths, and know how to slow dance without tripping. They write streams of letters, kiss in the rain and rebuild dilapidated houses (okay, those examples only apply to “The Notebook”). Yet my point stands nonetheless.

As a society, we have held up misguided depictions of the “ideal woman”: the manic pixie dream girl, the femme fatale, and the action hero who can fight even if her hair isn’t in a ponytail. These unrealistic conceptions of women still exist in popular media, but you don’t fix issues with Barbie by making a Ken doll. Doing that just gives you a male version of the same mistake.

I’ve carried on in this column about how the men of contemporary romances are a reflection of what women desire in a partner, and how this is a good thing because it gives a platform for women to express their ideal vision of romantic relationships. However, I must now add the caveat that some of these idealized male characters are taken a little too far.

The best way to describe this phenomenon involves, oddly enough, “Groundhog Day: The Musical” (hear me out before you stop reading!). In a song reflecting women’s unfair expectations of romance, Rita, the female lead, describes her perfect man: “He’ll be good looking but not too aware of his looks / He’ll be tender but tough / And smart but not smug / And attentive but not fawning,” as well as liking reading, cooking, hiking, baking, biking, dancing and going to the gym, so long as he does not spend too much time there.

Rita’s wishlist in this song is sort of like the requirements voiced by couples on “House Hunters,” and reality is their realtors replying, “With your budget, you can afford about one-third of these things.” No one embodies every idealized characteristic to the exact degree, and even if someone seems to, you’ll land yourself in a Goldilocks situation with no perfect bed or porridge.

In a genre led by women, authors — at least the good ones — make an effort to write complex heroines that have been left out of the male-dominated markets for years. It’s frustrating to see some of them waste that characterization on poorly drawn heroes today. Not only are these male characters unrealistic, but they also reflect poor writing. Conflict is always more realistic and engaging when you have two people with understandable interests and complicated backstories.

This brings me to the perfect example of a flawed male protagonist in literary romance: Drew from Jasmine Guillory’s “The Wedding Date” (I want to note that this is nothing against Guillory. She has made the romance genre mainstream with her funny, diverse stories of love and humorous mishap, and deserves plenty of credit. But back to Drew). He’s a doctor for underprivileged teens! And he’s ripped! And he had his heart broken and needs a caring woman to fix it!

While Drew sounds great at first glance, he also happens to be one of the most boring male leads I have ever encountered in literature, mainly because I did not believe he could exist. In my mind, he looked like a dollar-store version of Warner from “Legally Blonde,” who already looks like a dollar-store version of Patrick Swayze. These three characters have one overarching similarity — their main personality trait is their hair.

Characters like Drew are unfair to men everywhere. If people start expecting him, they will be disappointed by every real man who comes along in their life. I’m about to drop a hot take, so prepare yourselves: humans are flawed.

And yet love exists anyway, and so do marriages. Chances are, Mr. Right has his own baggage and annoying habits, but that doesn’t mean you don’t love him — you just like him more than you hate his flaws. And you are such a real person for doing so because, in return, he should like you more than he hates your flaws.

Anyone who knows me personally will think it is a hoot and a half that I’m dishing out this wisdom, but I will stick to my theories on this one. The male leads of the real world all have their weaknesses: in the case of some Georgetown men, it’s thinking Vineyard Vines is cool.

I invite you to go forth and keep your expectations of romantic interests limited, starting with what I like to call the Three Commandments: 1) they respect people (duh); 2) they don’t act like they are the first human being to discover “Pulp Fiction”; and 3) they know that ham and pineapple on pizza is a crime against humanity.

Best of luck finding them.

Melinda Reed is a first-year in the college. Between the Covers appears online and in print every other week.