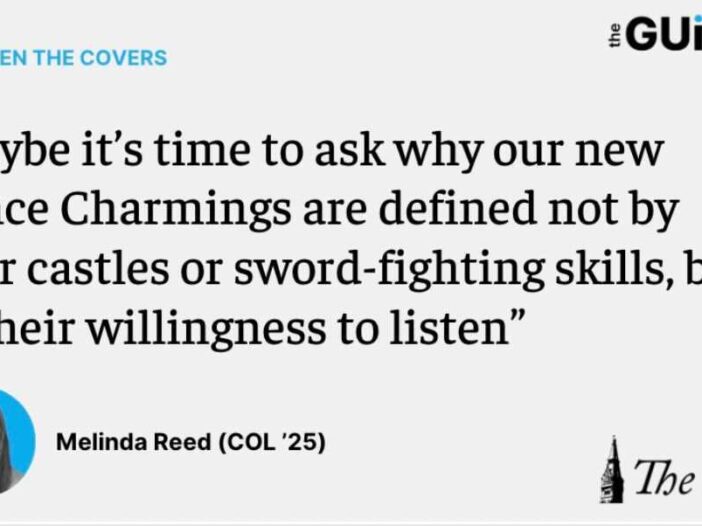 Every once and a while, the romance genre abandons rom-com fantasy in favor of real, difficult issues.

Considering the heightened and increasingly publicized movements like the #MeToo campaign, it makes sense that romance stories are beginning to stray from the typical fairytale depictions of relationships. This trauma — specifically sexual trauma — is becomming so common that it has permeated a genre originally intended to lack substance.

In the show “Unbreakable Kimmy Schmidt,” the protagonist, a survivor of kidnapping and assault, begins therapy and goes to her “happy place.” Inevitably though, each time Kimmy goes to this happy place, violence breaks out: Poor Thumper the bunny gets his head ripped off, the sky darkens and Kimmy has blood on her hands. Kimmy’s trauma cannot be compartmentalized, even when she finds wholesome love with a man from her GED class, and it diffuses everywhere with no concern for her dream life.

Interpersonal violence is unfortunately such a fact of life that we cannot escape to that “happy place” without some sort of darkness following us. Chances are, if you identify as female, you or someone you know has been a victim of abuse or assault.

Because — if you have read this column before, say it with me — the romance genre is by, for and about women, it has become a place for authors to write the world they want without ignoring the world that is.

There are so many wonderful books in this microcosm of the literary industry, and they tend to crossover a number of genres — some even earning their way to the regular fiction section instead of the seedy romance shelves in the back. Some winners include: “Evvie Drake Starts Over” by Linda Holmes, “One to Watch” by Kate Stayman-London, “Dear Emmie Blue” by Lia Louis and “Get a Life, Chloe Brown” by Talia Hibbert.

For now, I want to talk about “The Flatshare” by Beth O’Leary.

In the novel, Tiffy Moore is a thirty-something woman in desperate need of a place to live after her most recent breakup with her on-again, off-again boyfriend. She shares a flat with Leon Twomey, a night shift nurse, who lives there half the time during the day while she stays there at night. It is a strange and awkward premise — and everything you would expect from it — but despite this, the pair start to form a friendship through the notes they leave each other around the apartment.

While all this is happening, Tiffy, a book editor, is still processing the breakup with her longtime boyfriend. It does not help that he seems to be showing up at random places, like he wants her to remember him even though he left her for someone else.

Those moments are when memories start coming back to Tiffy, ones she had long forgotten: how he would try to resolve a fight by forcing himself on her; how he controlled every aspect of her life; the things he would say that made her feel small and worthless. Tiffy remembers the fear, the self-hatred and the insecurity that defined a relationship she had idealized for so long.

Tiffy is a survivor of domestic violence, and without patting itself on the back, or transforming into an after-school special, “The Flatshare” shows how an abusive relationship can change a victim’s sense of reality.

In this false world, their partner’s treatment is acceptable, even loving. But it takes space, time and healthy relationships to leave that reality and return to the real world. In the middle of a romantic comedy, O’Leary unravels this mystery for Tiffy and allows her to heal — with the help of a male lead who understands that her trauma will not disappear with one good cry.

However, it is telling that this is the ideal man women create for themselves. I have written before about how male leads can be unrealistic in their perfection and that’s still true, but male understanding of and respect for the healing process that needs to happen after trauma is achievable. It should be the standard, not the exception.

Women are rewriting the fairytale with every romance novel. Maybe it is time to ask why our new Prince Charmings are defined not by their castles or sword-fighting skills, but by their willingness to listen, learn and help the princess through the dark times.

Melinda Reed is a first year in the College. Between the Covers appears online and in print every other week.