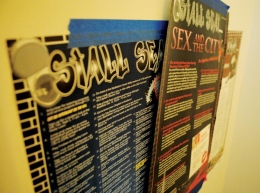 The Stall Seat Journal is flush with success after tapping into the ultimate captive readership: people in toilet stalls.

The news flier, which is published once every two weeks, is posted on the interior-facing doors of about 400 dormitory communal bathroom stalls. The joint effort began at Georgetown in 2004 as an unusual collaboration among Health Education Services, eight student contributors and the Anheuser-Busch beer company.

Although each issue features a variety of topics — from facts about the basketball teams to tips for eating at O’Donovan Hall — the journal primarily aims to educate students about alcohol consumption as part of a national social norms initiative. Each issue features a brief fact about college alcohol consumption, such as “Most Hoyas have zero to four drinks while partying.”

Tessa Telly, Georgetown’s social norms coordinator who works under Health Education Services, said that campaigns for universal abstinence from alcohol are unrealistic. According to statistics, 80 percent of students on campus drink.

“We do support students who chose not to drink,” Telly said, “but for those students who do drink, we don’t want them to think that if they are going to drink, they have to drink a whole lot because that is what the majority of students are doing.”

The Stall Seat Journal — one of many college publications of the same name  — is funded primarily by a grant from the Anheuser-Busch beer company, which provided Georgetown over $60,000 for 2010-2012. According to its website, the company has given nearly $8 million since 1999 for college social norms initiatives.

Keller said that the NSNI has not run into opposition from groups who may favor total alcohol abstinence on college campuses. According to the institute’s website, some colleges that have adopted the social norms campaign have experienced an over 40 percent drop in “heavy episodic alcohol consumption” over several years.

The Stall Seat Journal originated at the University of Virginia in 1999 and has since spread to campuses across the country. Georgetown dramatically remodeled its version in 2007, and now features flashier layouts and more brazen topics such as romance and sexual safety.

“Our main goal is to pull student’s attention in, and then we include facts about alcohol,” Telly explained.

Health Education Services conducted a survey in 2010 to assess the program’s progress. Of students surveyed, 86 percent said the Stall Seat Journal is “Very/Moderately Useful.” In addition, 93 percent of respondents could recall at least one of the program’s four main campaign statistics regarding social norms, and 41 percent said they use responsible drinking tips contained in the Journal.

Anushka Singh (MSB ’14), a first-year contributor to the publication, was surprised by the level of freshman alcohol consumption when she arrived on the Hilltop as an international student.

“When I came here during orientation week I was shocked because so many people just went all out,” Singh said. “I think people were going with the goal of I’m going to drink, I’m going to overdo it, I’m going to throw up. But that’s not what it’s really like here.”

Singh said that many students are surprised to learn how moderate Georgetown drinking is when they read statistics on the Stall Seat Journal. “We present our information from a more approachable stance,” she said. “It’s not some authoritative ‘no, don’t drink!’ We know you are going to drink, but be smart about it. Instead of having people go by perceptions, we give them the real picture.”