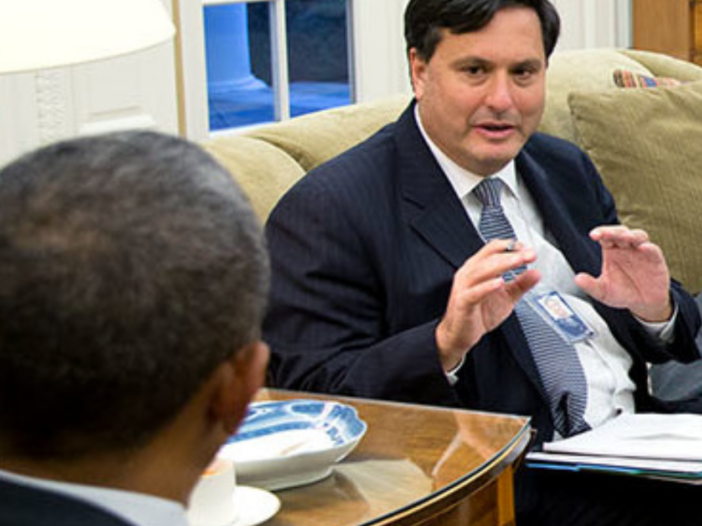 White House Chief of Staff Ron Klain (CAS ’83) and Chief of Staff to the Vice President Harina Flournoy (CAS ’78, LAW ’84) reflected on President Joe Biden’s first 100 days in office and how their Georgetown experiences prepared them to serve as public servants at an April 22 virtual event.

The Zoom event, held in celebration of Georgetown Institute of Politics and Public Service’s fifth anniversary, featured Klain and Flournoy in their first joint public appearance. In a conversation moderated by GU Politics Executive Director Mo Elleithee (SFS ’94), the two White House officials paid homage to their Georgetown educations before outlining the most important policy issues the Biden administration has prioritized in its first 100 days, including the COVID-19 pandemic, racial equity and the surge of immigrants at the U.S.-Mexico border.

Former President Barack Obama helped introduce the speakers while congratulating the work GU Politics has achieved in the past five years through engaging students with politics.

“Keep the faith, especially the work you’re doing to break through the filters and bubbles to help us come together. Your work couldn’t be more important,” Obama said in a prerecorded video message.

Klain and Flournoy echoed Obama’s remarks, voicing their appreciation for Georgetown and the GU Politics program. As someone who experienced Georgetown life as both an undergraduate and graduate student, Flournoy said she made some of her happiest memories as a Hoya.

Flournoy said the values she cultivated while at Georgetown played an integral role in shaping her interest in public service and eventual career path.

When discussing the policy moves of the new administration, Klain and Flournoy touted COVID-19 vaccinations, economic recovery and progress on climate reform as Biden’s main achievements of his first months in office. Biden’s signature accomplishments include vaccinating 200 million Americans as well as signing the $1.9 trillion American Rescue Plan, a stimulus package meant to provide economic relief for families in light of the pandemic.

Bipartisan support for the American Rescue Plan and vaccination efforts are signs of the willingness of both parties to work together in Congress under the Biden administration, according to Klain.

“The kind of unity of purpose and unity of effort that is involved in that I think is very impressive to see,” Klain said. “We’re also seeing — on a more political level — broad bipartisan support in the country for initiatives that the president and vice president brought forward.”

Issues of racial justice were brought to the forefront of the nation’s attention in the past weeks with the trial and conviction of Derek Chauvin, a Minneapolis police officer whose murder of an unarmed Black man, George Floyd, launched global protests for racial justice. Biden and Harris called Floyd’s family following the news of the conviction, and the president referred to systemic racism as “a stain on our nation’s soul,” according to a White House press release following the verdict.

Tackling issues of racial justice is an urgent priority for the nation, according to Flournoy.

“It has to be a whole government approach,” Flournoy said. “The way that the president and vice president spoke to that family, which said so much about them and so much about what they believe this government should be standing for and doing, and I think people hear them, and it makes a difference.”

One area in which the Biden administration has struggled to make inroads is immigration. The U.S.-Mexico border has seen a surge in families trying to enter the United States since Biden took office, and the administration has recently faced backlash for failing to develop a robust plan to help newly arrived immigrants.

Flournoy said that Vice President Kamala Harris is currently focused on handling the immigration crisis at the U.S.-Mexico border but stressed that the administration would need more time to introduce reforms to the immigraiton process.

“No one who’s studied the history of this region or seen what has happened thinks that this will be a quick fix,” Flournoy said. “Where we think that we can possibly help is by making some changes in those regions by investing in the acute and root causes.”

Looking ahead to the future, Klain said that Biden hopes to further accelerate economic recovery in the wake of the pandemic by lobbying Congress to pass the American Families Plan and American Jobs Plan, which are intended to provide jobs and tax breaks to boost economic growth. Biden also plans to push forward a George Floyd police reform bill and reforms to gun control despite early signs of opposition from moderate Democrats and Republicans in the Senate, according to Klain.

All White House policy staffers recognize that overcoming divisiveness between political parties will be critical to realizing Biden’s agenda, according to Flournoy.

“We’ve gotten tied up by so much that was built to divide us. What we’re trying to get back to is getting away from those things, and this administration has had a big hand in making people see what we can be, what it was at one time and what it can be again,” Flournoy said.