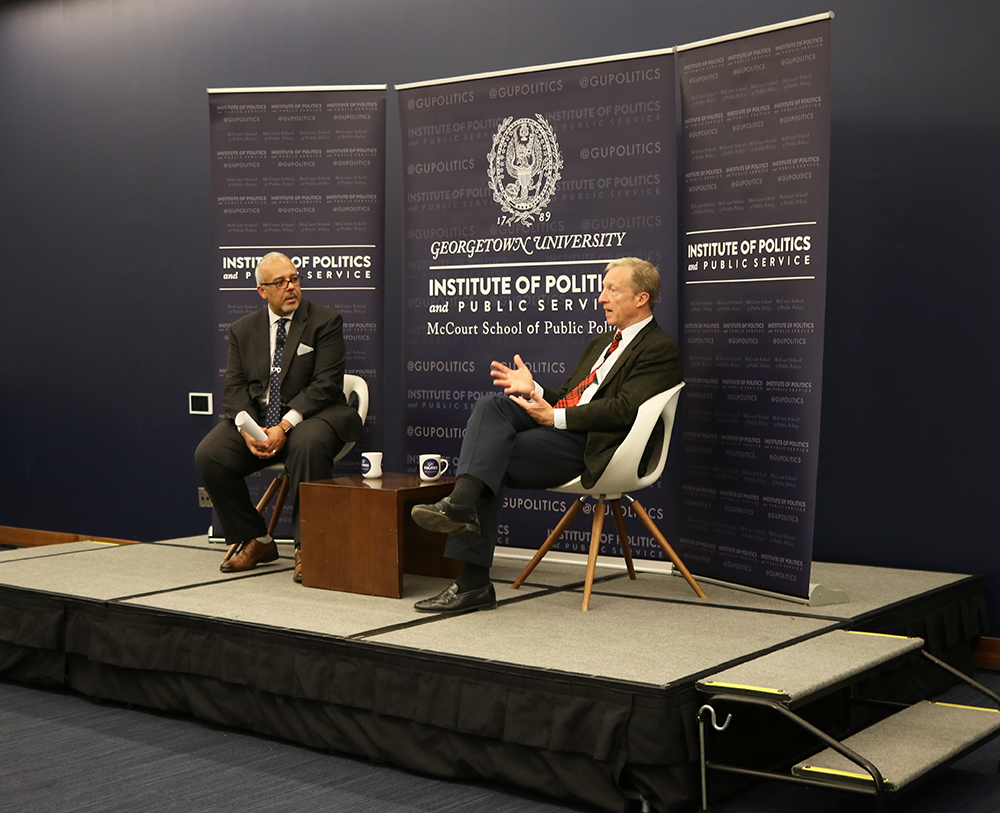 Billionaire activist Tom Steyer called for a collective effort of U.S. citizens to back the impeachment of President Donald Trump on March 26.

Steyer launched Need to Impeach, a grassroots campaign advocating for the impeachment of Trump, in October 2017. He stepped down as CEO of Farallon Capital in 2012 to dedicate his time to philanthropy and political activism.

The Need to Impeach petition has been signed by more than 7.7 million Americans and counting, according to the campaign website. Steyer personally cites obstruction of justice, corruption and neglect of duties as commander in chief and protector of the American people as his own justifications for impeaching Trump. Both of the former presidents who were impeached, Andrew Johnson and Bill Clinton, were later cleared of charges by the U.S. Senate.

The campaign for impeachment requires support and backing from a large number of U.S. citizens, according to Steyer.

Steyer said that his campaign aims to restore power directly to the American public rather than reserve political influence for elected officials.

The event, titled “To Impeach or Not to Impeach,” was hosted by the Georgetown Institute of Politics and Public Service in the Healey Family Student Center Social Room and moderated by GU Politics Executive Director Mo Elleithee. Approximately 30 people attended the event.

As a fulfillment of a campaign promise, Trump announced in June 2017 that the United States would pull out of the Paris Agreement, an agreement within the United Nations to combat greenhouse gas emissions through mitigation, adaption and finance. Trump also called for the deregulation of the fossil fuel industry in an October 2018 cabinet meeting.

The president’s neglect of environmental protection is putting all Americans at risk for his own political gain, according to Steyer.

“He is trying to accelerate climate change,” Steyer said. “He is putting us at risk for a political purpose; the support of fossil fuel companies.”

“To make these difficult decisions, it is imperative that the people have the full extent of the information surrounding the president and his advisors’ actions as well as the constitutional bases for impeachment,” Steyer said.

Need to Impeach outlines 10 primary criteria supporting the impeachment of President Trump laid out by 54 legal scholars chosen by the campaign on its website.

One of the campaign’s main criteria focuses on the emoluments clause of the U.S. Constitution, which states that the U.S. president cannot take bribes from foreign governments.

The Constitution’s foreign emoluments clause prohibits the president from accepting personal benefits from any foreign government or official. Trump has violated this clause, because he never divested from his hotel business, according to the Need to Impeach website.

Every time a foreign official stays at a Trump hotel, Trump is accepting a bribe from a foreign official, according to Steyer. Trump has seven hotel properties located in cities across the United States, including in Washington, D.C., Las Vegas and New York.

“You’re not allowed to take a bribe from a foreign country when you’re president of the United States and that’s in the Constitution,” Steyer said. “In the emoluments clause, do I believe that the president knows that he was taking money from foreign governments? Yes.”

Supporters of Need to Impeach have faith in their justification for impeachment and will not back down because of the president’s power and influence, according to Steyer.

“We strongly believe that what we’re doing is right, that America has to stand up for the right,” Steyer said. “And if you don’t do it under pressure because it is difficult or the person is powerful or rich, you set a precedent, and that precedent is going to be observed in the future.”