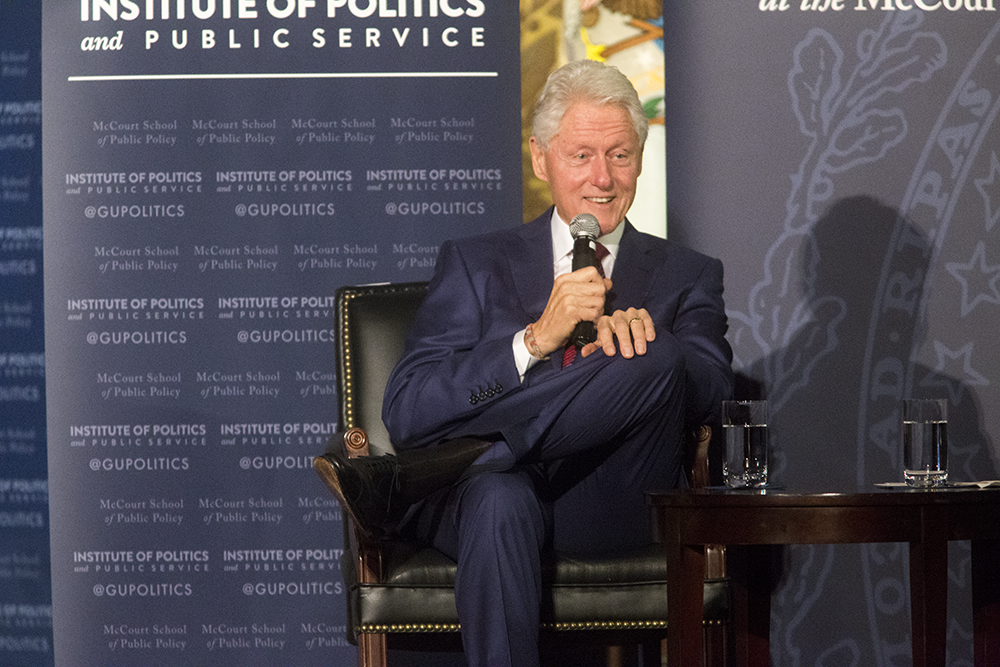 The Institute of Politics and Public Service’s celebration of the political legacy of former President Bill Clinton (SFS ’68) received generally positive bipartisan feedback from student leaders, despite the symposium’s lack of critical policy analysis and scrutiny of the former president’s alleged sexual misconduct.

In a keynote speech Monday to conclude the three-daylong celebration, Clinton focused on promoting cooperation between parties. Emphasizing that the responsibility falls on all Americans to start dialogue with those of opposing opinions, Clinton encouraged the audience not to further an “us-versus-them” mentality.

“The only way to think about it in a country as great as ours, the only sensible way to work toward a more perfect union, is to work toward inclusive economics, inclusive societies, inclusive cultures and inclusive politics,” Clinton said. “And that includes people who don’t vote with us — and may not even like us.”

Clinton has faced heavy allegations of sexual misconduct and has been accused by three women of unwanted sexual advances.

Huang said the GUCD board does not condone Clinton’s misconduct, but the board viewed the event as a rare opportunity to see a former president speak in person.

“As an organization, we are doing very concrete advocacy work to support sexual assault survivors,” Huang said. “We really want to highlight that, and if you take a look at how our organization is approaching Bill Clinton and the issue holistically, we prioritize survivors, and we try to be a survivor-centric organization, and in this case, it was just the fact that he’s a president, and we had the opportunity to meet him.”

Williams said she and the GUCR board had a conversation to analyze Clinton’s sexual misconduct allegations, and came to the same decision as the GUCD board to go to the event while keeping the issue in mind.

“Under my leadership, I’ve really tried to emphasize the fact that supporting sexual assault survivors is not a partisan issue,” Williams said. “We had the conversation like you did with [the GUCD] board. Obviously, it’s probably more of a topic you guys bring up, because my board isn’t 100 percent behind supporting survivors, unfortunately, which I think is something our party needs to work on, but something I think under my leadership we have been focusing on.”

While “Clinton 25” did not address more contentious aspects of Clinton’s presidency like the 1994 crime bill which disproportionately punished people of color or allegations of sexual misconduct, Mo Elleithee (SFS ’94), GU Politics’ executive director, said the events did aim to delve into the ideas that got him elected.

“The goal of the Clinton 25 symposium was to reflect on the vision of President Bill Clinton — the vision that helped elect him president in 1992 and the vision that drove his time in office,” Elleithee wrote in an email to The Hoya. “While a lot of major policy issues came up during the course of Clinton 25, our goal was to host a conversation focused on the themes and vision of the Clinton administration, as opposed to focusing on a litany of policy decisions.”

Aaron Bennett (COL ’19), a member of the GU Politics Student Advisory Board, said events did not aim to take a deep dive into policy issues.

“To my understanding, this whole event was framed as sort of a reflection on not just the presidency of Bill Clinton, which was multifaceted, but how Georgetown specifically impacted that administration and those around him,” Bennett said.

Both Williams and Huang said Clinton’s bipartisan rhetoric is important for students to absorb.

Williams said GUCD and GUCR have already been working together to fight the “us-versus-them” sentiment through bipartisan dialogue, debates and policy forums.

“He’s very approachable; he’s the kind of politician that isn’t going to say to you, ‘if you’re a Republican, I don’t want to talk with you.’ He was equally interested in talking to me as he was to Larry,” Williams said.