You have heard the buzz about bitcoin, the global currency that only exists online. What you might not have heard is that bitcoin is just one part of a larger cryptocurrency movement that has the potential to change the financial industry.

In 2009, Bitcoin v0.1, the network over which bitcoin currency is traded was released by Satoshi Nakamoto, an online pseudonym for an anonymous individual or group. In the release notes, Nakamoto described the Bitcoin network as a new form of digital currency that uses a peer-to-peer network to prevent duplicate uses of currency and has no central server or authority.

In effect, bitcoin was released as a new form of currency without central regulation, even by Nakamoto. For a change to be made to the central ledger of transactions known as the “blockchain,” a significant number of nodes — participants in the network — must agree on what that change is.

Only a small number of transaction reversals, known as “hard forks,” have occurred in the world of cryptocurrency, and none have been exacted for bitcoin. Historically, hard forks have been used to undo the damage done by hackers who have exploited early software vulnerabilities.

At its release, bitcoin traded at a rate of 1,309.03 bitcoin to $1. One bitcoin was equivalent to less than .08 of a penny. At the time, bitcoin lacked the credibility and renown to draw the attention of regulators and financial institutions; however, when bitcoin’s price surged and eventually peaked at over $1,200 per unit in early 2014, these groups took a keen interest in the digital currency.

Although the Bitcoin network’s market cap sits at approximately $15 billion, a drop in the proverbial bucket of global commerce, some regulators have taken to sweeping reform or blacklisted the currency entirely. In late 2013, the People’s Bank of China announced that financial institutions operating within China were prohibited from exchanging the currency at all. This announcement coincided with a large drop in the price of bitcoin, as wealthy Chinese citizens had been using the currency to sidestep legal measures that prevented them from expatriating any significant amount of money.

This price fluctuation, and the story behind it demonstrate some of the challenges that bitcoin faces as a form of currency.

First, bitcoin is not backed by the credit of any government. As a result, bitcoin is far more volatile than most other currencies on the foreign exchange.Second, China’s stance on bitcoin is endemic of a larger problem within the sphere of cryptocurrency. China’s unilateral decision to ban the exchange of bitcoin was a major influence that devalued the currency by nearly 20 percent. Therefore, its status as a stable carrier of value is questionable at best.

Although Bitcoin provides a complete ledger of every transaction that has been performed, domestic and international regulators do not have experience dealing with this type of shared digital ledger. Thus, the adoption of blockchain technology into the mass market could bear high start-up costs for taxpayers.

Despite these problems, large financial institutions have looked to blockchain technologies like the Bitcoin network as a path to the future. These institutions hope to capitalize on features of blockchain to help eliminate some of their back-office cost centers.

Among these new features are “smart contracts,” which effectively act like legal or financial contracts in code but have the added benefit of automated enforcement, payments and more. For example, if Jack has a lending agreement with Jane that mandates her debt-to-equity ratio remain below a threshold, they can include a conditional penalty that would be paid automatically should that term be violated. These contracts could slash salary expense for firms across the financial sector.

To make this a reality, Wall Street banks and financial technology firms, such as CapitalOne, Visa and Chain, have collaborated to solve the problems of early cryptocurrency like bitcoin. Participants hope to adapt existing blockchain technology to allow for administration and oversight by creating a consortium of reputable institutions that would maintain the blockchain ledger and legitimize the medium of exchange. It looks like these firms are creating the technology that will invalidate their own business models, but, instead, these firms view this investment as critical to their future relevance.

Ironically, the Bitcoin network’s first block, a file in which transaction data is stored, contained a set parameter referencing a Times article about an upcoming bank bailout. As a result, the bitcoin has, at times, been viewed as an anti-establishment currency that operates both by the people and for the people. Given the challenges that bitcoin has faced, reputable institutions may be needed to lend credibility in the global market. 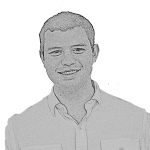 Kevin Murphy is a Junior in the McDonough School of Business. BYTE OF WALL ST. appears every other Friday.