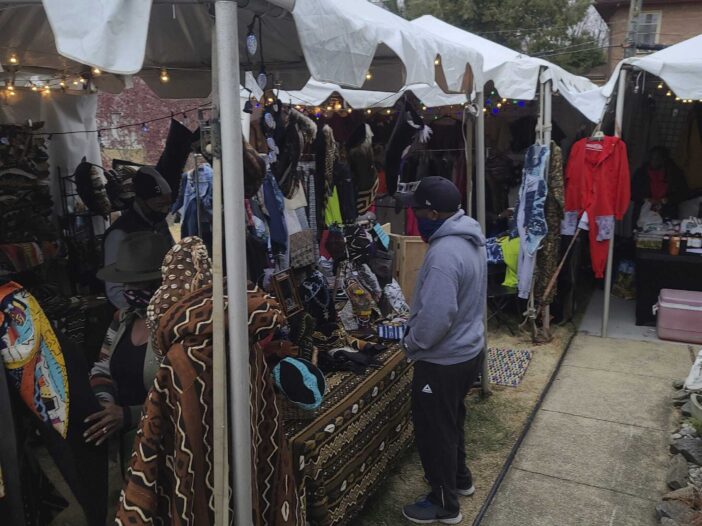 An African-American led market reopened at the Shiloh Family Life Center in Northwest Washington, D.C., on Nov. 25, the first time since the pandemic started in 2020.

The market will be open every Saturday until Dec. 24. The market is titled “BZB Shop til ya Drop,” an homage to BZB International, a Black woman-owned public relations firm operating more than 100 D.C. businesses.

Britton’s inspiration for the market came after she visited the Brixton Market in London, where she saw a large community of Caribbean artists selling handmade items.

Esther Iverem, owner of Legacy Quilts and Art — an art studio that will sell its items in the holiday market — said she is excited that BZB is returning to support local artists.

“With BZB starting up again, it gives a lot of people an opportunity to display and exhibit their work and just find customers,” Iverem told The Hoya. “I think a lot of businesses there do not have a brick-and-mortar location.”

The pandemic disproportionately hit Black businesses, with Black business ownership declining more than 40% between February and April of 2020.

Iverem said her inspiration for quilting grew after she made a memory quilt for her 16-year-old son. The quilt was made from the bottoms of her son’s jeans, cutoffs, camels, khakis, old jerseys and t-shirts.

Arvid Lee, who runs Stained Glass by Arvid Lee, a stained glass portrait company, will also display his work at the BZB market. He said he will participate in the BZB market because guests there are more likely to purchase his work than at other markets like flea markets.

Lee said he looks forward to the social aspect of the event. Lee said he is also excited to see familiar faces in artists and customers.

“The people who attend know it is going to be there every year,” Lee told The Hoya. “I have people who come to the event specifically for me.”

Lee said he began his journey as an artist in doodling. Lee said he originally worked on pastels, before shifting to the art of stained glass.

“Even when I would attend art shows in the area, I would see that many artists had the same kind of thing,” Lee said. “I used to doodle a lot. I thought, ‘How can I implement those doodles and do something that is different from what is on the art scene?’ I happened to see a stained glass class. I enjoyed it.”

Lee said that since the start of the pandemic, small business owners have started exploring more creative avenues like social media to share their artistic work.

“What people are doing now is trying to be more creative with marketing, doing more on social media,” Lee said. “They may be looking to see on Etsy or in galleries. They are trying to spread out.”

Britton was intent on bringing the BZB market back this year to display the work of artists like Lee and Iverem, receiving over 800 calls from people inquiring about the show. Britton predicts that the event, which is expected to host thousands of customers, will bring in around $500,000.

Iverem said the U.S. is facing many economic challenges, but she hopes that with the holidays, many buyers will be able to purchase art from the event.

“Not everyone has money,” Iverem said. “We still have tremendous economic challenges in the country. But, we hope that when people come to the holidays, they may have a few extra dollars that they have set aside.”