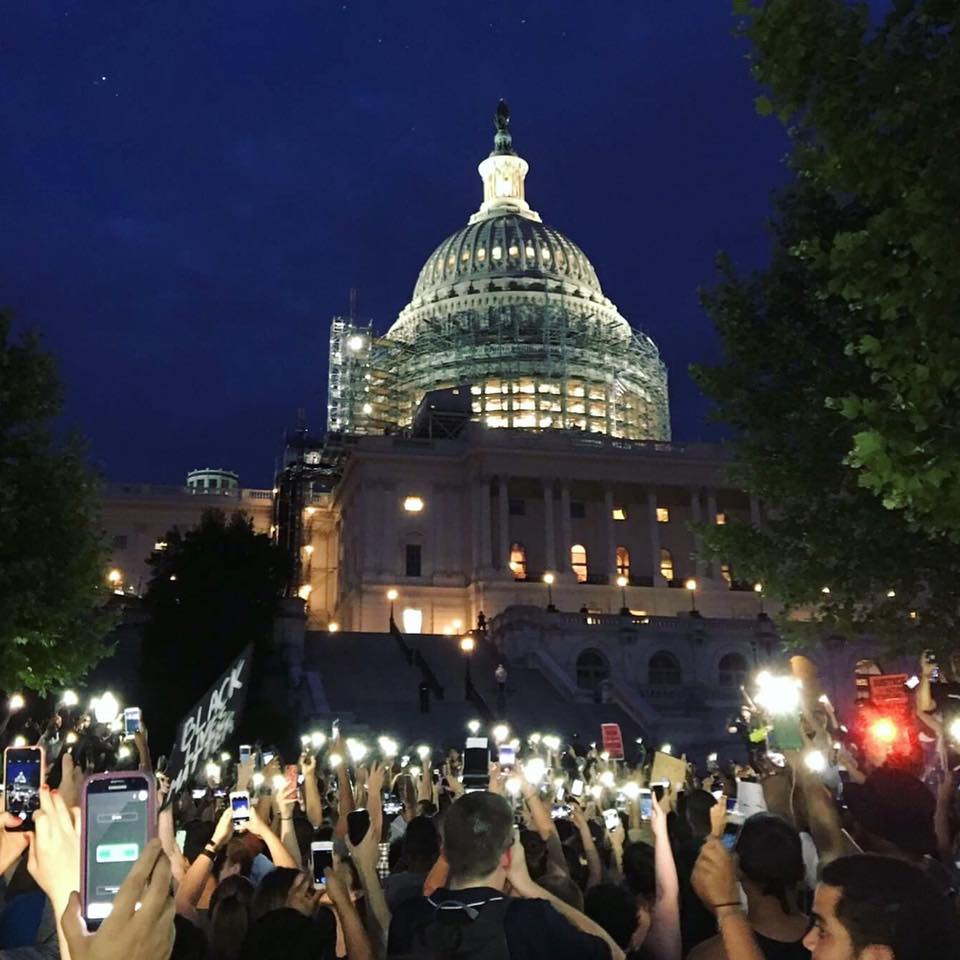 A group of more than 1,000 people, including around 25 Georgetown students, marched from the White House to Capitol Hill and back last night to protest police brutality after two fatal, police-involved shootings of black men this week.

The deaths of Alton Sterling in Baton Rouge, La., and Philandro Castile in Falcon Heights, Minn., have sparked Black Lives Matter demonstrations around the country. At the D.C. demonstration, marchers held signs and chanted “Black lives matter,” “No justice, no peace” and “Hands up, don’t shoot” as they made their way to the White House.

#BlackLivesMatter protest in DC marched from the White House to the Hill pic.twitter.com/tztQcJvuXs

President Barack Obama said the shootings should concern all Americans, not just those who are victims of police brutality, in a televised statement last night.

“All of us as Americans should be troubled by these shootings,” Obama said. “These are not isolated incidents, they are symptomatic of a broader set of racial disparities that exist in our criminal justice system.”

More than 40 members of Congress met the group at the steps of the U.S. Capitol building to show solidarity with the marchers, and around five members of Congress, including Rep. Luis Gutierrez (D-Ill.), Rep. Maxine Waters (D-Calif.) and Rep. Hank Johnson (D-Ga.), marched back to the White House alongside the crowds.

“When you see something that’s not fair, that’s not right, that’s not just, you have a moral obligation to speak up,” Lewis said.

Waters told the crowd that incidents of police brutality have become too common in America.

“I am sick of this s–t, and I am not going to take it anymore,” Waters said.

In a campus-wide email sent this morning, members of the Office of Campus Ministry responded to the Castile and Sterling shootings, as well as last night’s police shooting in Dallas, in which five officers were killed in a sniper ambush during a peaceful protest.

In the email, Campus Ministry leaders pushed for solidarity after instances of violence.

“In the face of this deep hurt people find ways to come together, to stand in solidarity, and work towards social justice,” the post reads. “The activism and advocacy efforts of groups like the Black Lives Matter movement are pushing our country to grapple with its own history of institutionalized racism.”

Campus Ministry will host a Mass in solidarity Sunday evening. Rev. Raymond Kemp will deliver the Mass, which will take place in Dahlgren Chapel at 7:30 p.m.