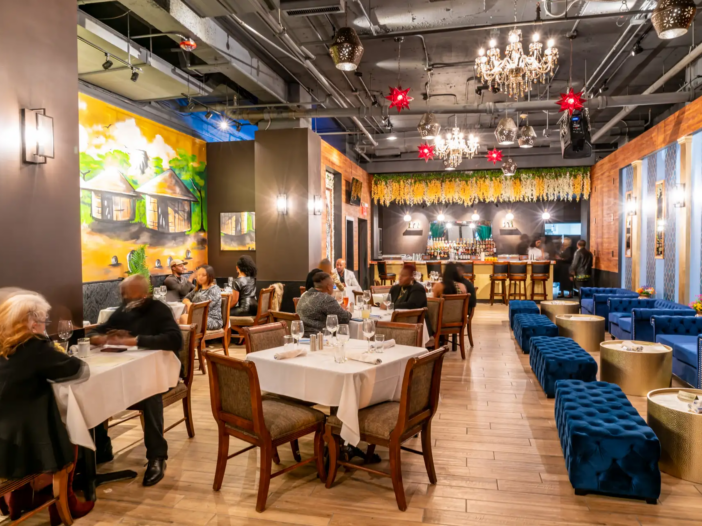 The week honoring Black-owned restaurants, which was held Nov. 6 through 13, promoted several food venues, including Melange, Queen Mother’s, All Set and Moi Moi which feature a variety of cuisines. The restaurants offered reduced prices for customers in honor of Black Restaurant Week, which has become an annual tradition since it launched in 2018.

“I think that was the main idea,” Cham said to The Hoya. “This gives them an opportunity to go try concepts of food that they’ve never heard of, seen of or even tasted in their lifetime, because I know my concept, my food, I can tell you one thing — you’re not going to go anywhere and find it. You might find something similar to it, but it’s not going to be like how I make mine.”

Cham said for Black Restaurant Week, Moi Moi served a glass of wine, an appetizer, an entree and a dessert for a discounted price of $65.

The restaurant advertised Black Restaurant Week on their Instagram page and on their website to increase publicity.

“The restaurant week was good for great advertisement for awareness and you know people coming from all over the world and trying it,” Cham said. “And they love it, because it’s different.”

This year’s DMV Black Restaurant Week promoted a diverse set of Black businesses, including restaurants with pre-fixed three-course meal options, more casual take-out spots and cafes, food trucks and bars. The 2022 theme, “Reshaping Our Community Through Ownership and Luxury,” highlighted Black entrepreneurs who are founding luxury businesses and expanding them for the purpose of catering to underserved communities.

Cham said that the week is impactful because minority-owned restaurants often do not have the same support as other restaurants.

“Those that are involved were lucky enough to get exposed to have them grow their business, because at the end of the day, minorities don’t get the same support as our counterparts, both financially and marketing and other stuff,” Cham said. “So it was a pleasure and it was good for us to have this kind of support.”

D.C. Mayor Muriel Bowser commemorated this year’s DMV Black Restaurant Week with an announcement awarding seven new businesses in Wards 7 and 8, which consist predominantly of Black neighborhoods, support through a new wave of $7 million to the District’s Food Access Fund, an initiative Bowser started in 2021 to eliminate food inequities.

Bowser said it is important to simultaneously uplift Black-owned businesses and restaurants throughout the District.

“The Food Access Fund is a fantastic example of how the government can work with local entrepreneurs to bring much-needed resources and amenities to the community,” Bowser said in a press release. “One way to celebrate DMV Black Restaurant Week is to go out and support Black-owned businesses in DC.”

Market 7, an upcoming marketplace that plans to feature Black-owned businesses in Ward 7, received a grant through the Food Access Fund during DMV Black Restaurant Week.

Mary Blackford, the founder of Market 7, said people in Wards 7 and 8 face increased health issues from conditions like diabetes and heart disease because of a lack of access to fresh food.

“We are so grateful to the Bowser administration for spearheading this, because it’s important to these sort of communities who are long-standing underserved communities in terms of food access, because it really does impact the lived life experience of those who are not having access to fresh and sustainable food,” Blackford told The Hoya. “So we are trying to combat that.”

According to Blackford, Market 7 will use the grant money for financial support as it constructs its food hall, which will feature a community grocer, a cafe space, a hydroponic bar and several eateries.

Blackford said she champions the work that the DMV Black Restaurant Week founders are doing to promote Black-owned businesses.

“Continue to support Black Restaurant Week and support Black-owned food businesses, Black businesses period, all year round,” Blackford said. “Continue to make sure you are pouring into spaces that have been marginalized in a way that takes away opportunities and resources from communities of color, particularly Black communities.”