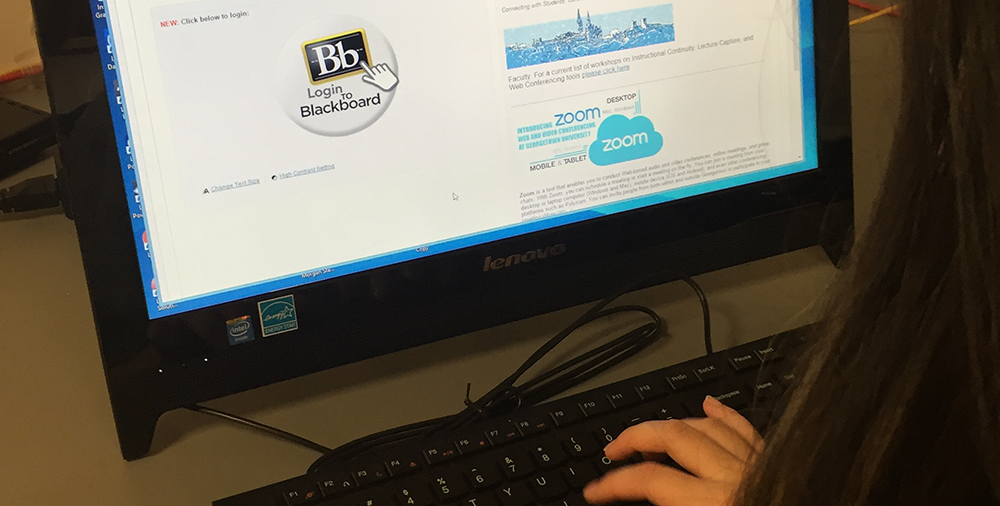 Blackboard Learn, Georgetown University’s campus learning management system and the traditional dominant player in the LMS industry, is facing hard times. The company continues to see its market share dwindle, but it seems unlikely that Georgetown will jump ship to a different LMS.

First released in 1997, Blackboard was one of the pioneer software companies in the LMS industry and has long remained the leader in the market. Yet what was nearly a 90 percent LMS market share has shrunk to around 44 percent, according to The Washington Post. Georgetown professors have been using Blackboard to upload course materials and make class announcements for more than 15 years.

As competition in the LMS market intensified in the latter half of the 2000s, the dominant market share of Blackboard began to decline. According to a report by The Campus Computing Project, 71 percent of higher education institutions in America were using Blackboard in 2006. The number decreased to 57 percent by 2010.

In response to the changing market landscape, Blackboard plans to incorporate new technologies in its system. Senior Vice President of Marketing for Blackboard Tracey Stout said Blackboard aims to expand its service beyond traditional functions of LMS.

“Learners today are on mobile devices,” Stout wrote in an email to The Hoya. “They are on social media. They are collaborating with their fellow students and interacting with professors online. We are much more interested in using many forms of technology, in a connected and cohesive way.”

Blackboard’s overseas market prospects also look precarious. According to edutechnica.com, an education technology blog run by a former development manager at Blackboard, Blackboard witnessed a 4 percent decrease — from 39.6 to 35.8 percent — in its combined market share in the United States, the United Kingdom, Canada and Australia between 2013 and 2014. Meanwhile, the share of Moodle, a competing LMS, jumped from 15.8 percent to 19.7 percent.

A 2009 LMS review by Duke University showed that several higher education institutions have cited cost savings, customization and flexibility as the advantages of switching to other LMS platforms, most predominantly Moodle or Sakai. Although Blackboard does not release details on pricing, a June 2008 Education Week article put the price tag for large institutions at around $25,000 to $75,000 annually.

In 2012, Duke also completed its transition from Blackboard to Sakai, one of the main reasons being increased flexibility with Sakai.
The functional flexibility of Moodle and Sakai primarily comes from their open source base. Open source software allows individual users to use and modify the system and to distribute modified versions to other customers without paying licensing fees.

Meanwhile, it seems unlikely that Georgetown will switch from Blackboard anytime soon. Director of Educational Technologies for University Information Services Peter Farkas said that, while UIS does not commit itself to using only Blackboard, there will always be difficulties in using any LMS platform.

“I will say that there is no perfect software,” Farkas said. “We do encounter problems with Blackboard as we do with any software we use.”
For Georgetown, cost has not been a major obstacle in using Blackboard.

“The cost of Blackboard is very competitive … partly because of our long-standing partnership with Blackboard,” Farkas said. “I think there is a mistaken notion that open source means free. It generally means we don’t have to pay the licensing fee. But running a system is a costly endeavor, especially complex ones that serve the needs of tens of thousands of people.”

Farkas added that Georgetown has not experienced problems with customization either.

“Blackboard has a robust capability to offer customization, and we have built quite a number of features to enhance the experience for faculty and students,” Farkas said.

Still, students and professors suggest that there is room for improvement.

Associate professor in the African Studies Department Lahra Smith said that it can be hard to encourage a speedy and interactive discussion through Blackboard’s blog function.

One of the most important things in a LMS is an intuitive interface, according to Smith.

“Professors are a tricky market because most of us are not very good with technology, and we don’t often want to put as much effort into learning it as people in another field would do,” Smith said. “So we need technology tools that are fairly user-friendly and easy to learn.”

“Sometimes when my teachers post stuff, it’s really complicated to find out where they posted it and under what folder,” Cao said. “I can never find anything.”

While characterizing his experience with Blackboard as “generally pretty good,” Yang wrote in an email to The Hoya that Blackboard had its drawbacks.

“I found it difficult, relative to LSE, to navigate to previous posts,” Yang said.

Blackboard itself has changed hands as well. In 2011, a private equity firm, Providence Equity Partners, acquired Blackboard from the founders Michael Chasen and Matthew Pittinsky for $1.64 billion.

There is currently conversation in the business world that Blackboard is considering another sale, but Stout declined to comment on “rumors or speculation.”