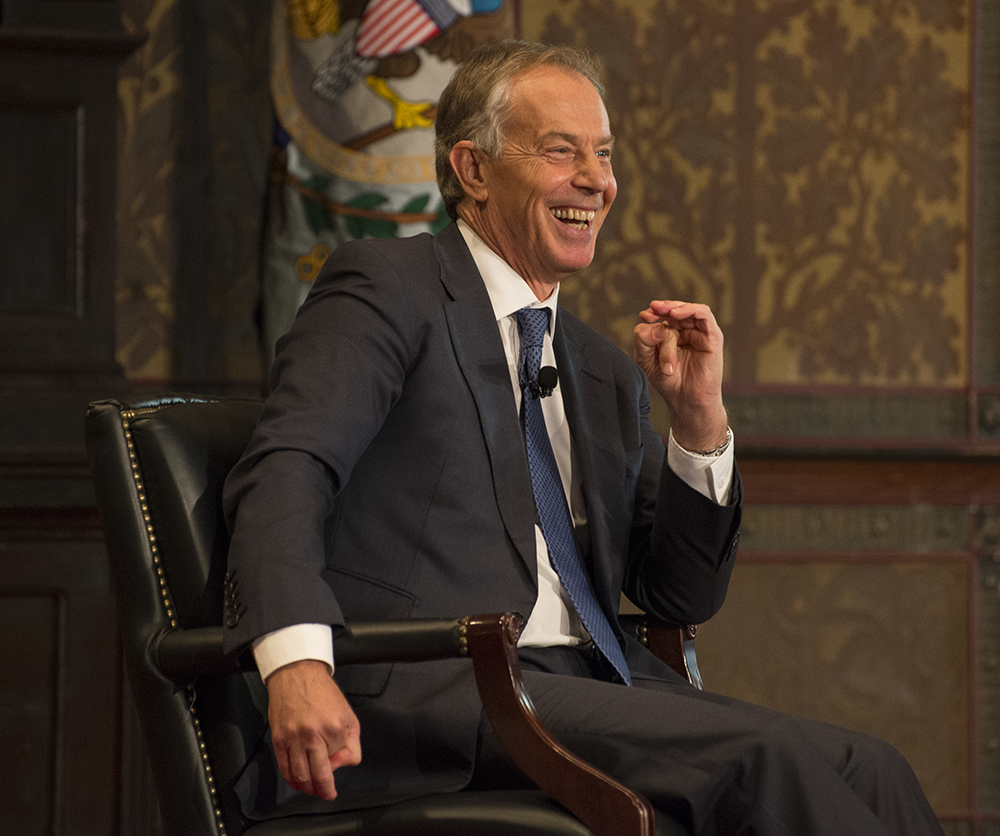 Former Prime Minister of Great Britain and Northern Ireland Tony Blair discussed the importance of implementing effective governance and the role of the international community in African development in Gaston Hall on Thursday.

The event, which was called “A Conversation on Governance, Development and Africa,” was moderated by Steven Radelet, director of the School of Foreign Service’s Global Human Development Program and part of this semester’s Global Futures Initiative, a series of conversations aimed at engaging the campus community in conversations regarding different aspects of global progress.

University President John J. DeGioia introduced Blair, speaking about the focus of the initiative and the greater conversation the series hopes to spark.

“The moment we are living in is unlike any moment we have known,” DeGioia said. “The challenges of this moment will not be met alone – they cannot be met alone. In fact, they can only be met by all of us working together in ways that were not possible before. Only through coming together will we be able to get closer to a deeper understanding of the dynamics, the contexts, the needs of our world.”

To begin the discussion, Blair detailed his African Governance Initiative, founded in 2008. Currently, the initiative is in place in Rwanda, Sierra Leone, Liberia, Guinea, Nigeria and Ethiopia and aims to create stronger governments with greater abilities to create infrastructure and other forms of economic development.

“How do we get the right systems of governance in African countries that allow those countries to move forward and prosper?” Blair asked. “I think that issue of the quality of governance today is as important as any other single issue.”

To implement that change, Blair emphasized his three main goals: prioritizing the most important issues, developing policy solutions and focusing on performance management.

He integrated anecdotes of his time as prime minister to highlight different challenges the AGI addresses, especially those about his adjustment during his first few days in office. Blair spoke about his first night at Downing Street and the difficulty of organizing how he would proceed as real governing began.

“The ‘now what’ is what is tough about government,” Blair said. “The purpose of our team is to try and answer that question.”

Blair also spoke about the importance of collaboration in achieving progress in governance and said this is one of the difficulties of establishing new political systems.

“Government finds it very hard to be creative. There is a natural desire in government to push away outsiders,” Blair said. “If you live and work alongside people, over time, the process is established.”

“Many of the problems we face in the world today, the left-right thing can get in the way of the solution, rather than be the basis of the solution,” Blair said. “If you focus on improving the lives of your people, rather than getting the applause for your next speech line, you’ll do a lot more for the people of your country.”

Another theme of the event was the Ebola outbreak in West Africa and its implications for the future of African development. Blair emphasized carrying over the successful methods of swift international response to other areas of globalization in the region.

“When the crisis hit, we had to change the whole way of working,” Blair said. “We need to learn the lessons of not just why the crisis happened and how it happened, and all of that of course, but actually in terms of governance, when we had to deal with this problem, government had to organize itself differently. It had to respond differently. It had to make sure that it operated in a far more effective way.”

“Look at what helps the long-term development of the country, rather than what I would say are the short-term projects that get you a round of applause in your Parliament,” Blair said.

Blair concluded with advice to students to find their passion and pursue it.
“The single best thing in life is to wake up in the morning with a sense of purpose,” Blair said. “The best sense of purpose in my experience is when you are going out and using the talent and the opportunity that you’ve been given and the education you get at a wonderful institution like this, is to go and see how you can use it to help change the lives of other people.

“I would say that he was very engaging and humorous, and I found his speech to be entertaining and he definitely kept my attention,” Derriennic said.

Max Dvorak (SFS ’17) added that he attended to listen to a world leader and came away with a greater understanding of the issues Blair spoke about.

“I was very interested to hear his take on the importance of rule of law and building towns in Africa,” Dvorak said. “I think that these are very important issues and it’s piqued my interest. I’m excited to learn more about it.”