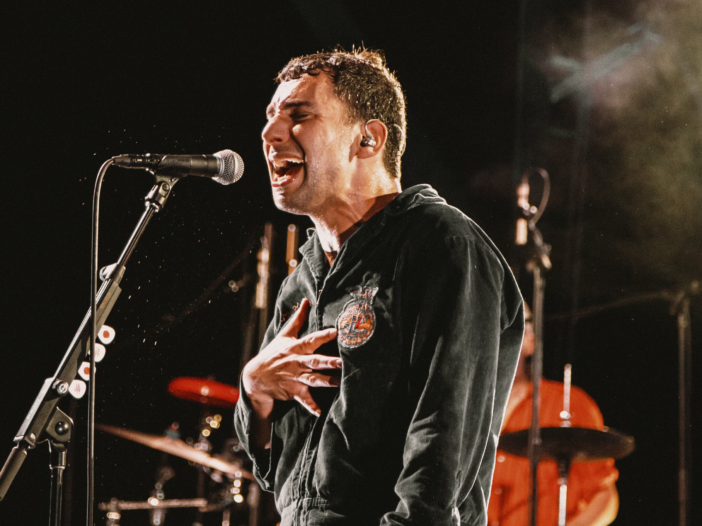 Jack Antonoff’s request to his fans is simple: take the sadness out of Saturday night.

Antonoff took the stage with his band Bleachers at The Anthem on Sept. 24 for a sold-out show. The Grammy-Award-winning alumnus of the band fun., who has helped to produce tracks for Taylor Swift, Lorde and Lana Del Rey, was touring his newly released album, “Take the Sadness Out of Saturday Night.”

It was Bleachers’ largest performance to date, and the crowd was noticeably ready for Antonoff and the rest of the band. Some attendees dressed up in tomato costumes to celebrate the state fruit of the New Jersey native, while others cheered, chanted Antonoff’s name and held up signs demanding that certain songs be played throughout the high-energy evening.

Opening for Bleachers was Claud, a 22-year-old singer-songwriter from Chicago. While Claud initially seemed detached from their performance, they quickly reversed course, singing with conviction while passionately dancing around the stage. Performing critical favorites like “Soft Spot,” “Gold” and “Guard Down” off of their debut album “Super Monster,” Claud took the stage as an unorthodox and sensitive artist who has potential to be a rising alternative-pop star.

When Bleachers came on, the band presented striking visuals on stage. Lit candles, a golden head of John F. Kennedy and posters taken from Antonoff’s bedroom adorned the piano, on which Antonoff opened the show with his intimate, Gulf War-framed reflection “91.” Letting the lights fade to black and electronic chords reverberate, Antonoff then launched into “Let’s Get Married,” a euphoric, upbeat track about the difficulties of love.

During these intense numbers, the stage lighting exploded into technicolor, with reds, yellows and blues flooding the audience’s peripheral view. The lights frantically strobed during the chorus of “91,” flashed at just the right moments during the bridge and dimmed when building to climaxes to let the audience breathe in anticipation. Antonoff commanded his audience easily, with each hand gesture, body movement and moment of eye contact helping to grow the energy in the room. His stage presence was infectious — Antonoff kept the audience engaged throughout the entirety of the show.

Throughout the night, Antonoff made sure to perform an even sample of songs from across his albums. Bleachers performed popular songs from their debut album “Strange Desire,” including “I Wanna Get Better,” “Reckless Love” and “Rollercoaster,” with Antonoff remarking upon their sentimentality.

The band also performed many tracks from Bleachers’ sophomore album “Gone Now,” like “Don’t Take the Money,” “I Miss Those Days” and “Everybody Lost Somebody,” while the audience lifted their hands and spirits in a literal sea of approval. Antonoff’s surprise to the audience’s support to these older tunes seemed authentic, and his elation reverberated through the venue.

Aside from Bleachers’ strong performances, the show had a handful of very special moments as well. During “Secret Life,” a soft ballad about wanting to find stability in a partner, a member of the audience spontaneously threw their disposable camera to Antonoff, who snapped some goofy photos before throwing the camera back into the crowd. In addition, before starting “Alfie’s Song,” a breakout hit from the “Love, Simon” soundtrack, Antonoff brought his dad onstage. They played guitar together during the song, which was an intimate and unforgettable moment.

Sadly, Antonoff announced during the show that his European stage manager had passed away that day. Dedicating the entire set to his memory, the audience almost brought Antonoff to tears when they later interrupted him with a standing ovation.

To conclude the night, Bleachers finished with “Stop Making this Hurt,” a heartfelt number about moving on. Antonoff drew out the ending of the song for an extended period of time, and it seemed like even the band did not want the show to end. Antonoff and his crew eventually exited the stage like children in a line at elementary school, playing the saxophone until it faded out off stage. This was a fitting end, with the band exiting as ingeniously as they entered. Sincerely mirroring the end of the song, Bleachers truly said “goodbye” to The Anthem “like they meant it.”

While this show at The Anthem was Bleachers’ biggest yet, it was also their best. Undeniably, it cemented Antonoff as a modern legend in the contemporary pop space. Though Antonoff might be best known for his background work, he unquestionably deserves center stage in the spotlight.