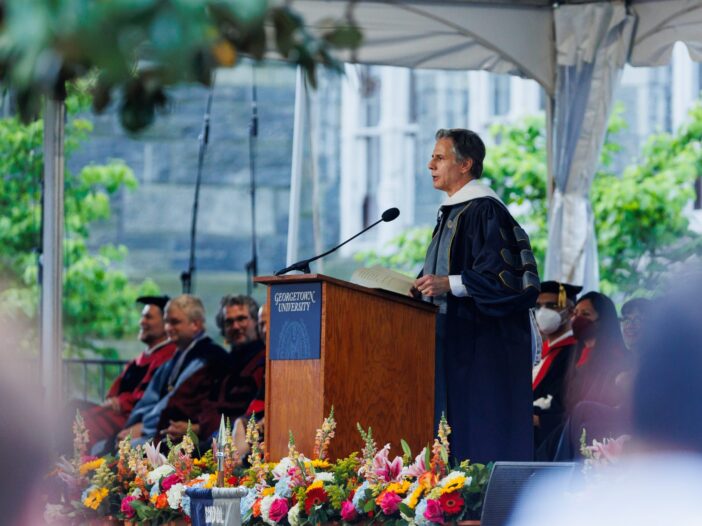 Georgetown held separate commencement ceremonies for each undergraduate and professional school May 20 and 21, the first on-campus ceremonies since before the COVID-19 pandemic in 2019. Each school’s distinct commencement speaker received an honorary degree from the school and spoke to its graduating seniors.

Blinken, who has served as secretary of state since President Joe Biden took office in January 2021, was the Walsh School of Foreign Service’s (SFS) first commencement speaker at an on-campus ceremony since former Secretary of State Madeline Albright spoke to graduates in 2019. SFS Dean Joel Hellman said Blinken’s current role and past work made him an apt choice as a speaker ushering in a new century for the SFS.

“He is someone who has dedicated his life to public service, and that’s what our school is all about,” Hellman told The Hoya. “It’s honoring him and his career.”

According to Hellman, the Russian invasion of Ukraine and ongoing international conflict allowed Blinken to provide clear insights on the direction of the international order to SFS graduates.

“There’s the moment and the position that he’s currently in, in which there’s just no better person to give us an overview of where the world order is heading in this difficult and uncertain time than the current U.S. Secretary of State,” Hellman said. “We are very keen to hear what the role of the U.S. will be in reshaping that world order.”

“It’s really symbolic that we’re having the Secretary of State talk to us, especially since he’s a very busy man, there’s a lot going on in the world,” O’Brien said to The Hoya. “I think that he definitely will have a lot of important career advice, but, generally, he will just be able to impart a lot of wisdom.”

“It is difficult to imagine an organization which better aligns with these ideals than Special Olympics,” Lorenson wrote to The Hoya. “There is a very Jesuit idea that those on the margins must be central to everything we do.”

Given that this year’s ceremony was the first on-campus graduation since the COVID-19 pandemic began, Lorenson said she hoped Shriver’s speech would serve as a reminder for the ways the pandemic has impacted vulnerable populations.

“The pandemic has both highlighted and exacerbated the inequities faced by our most vulnerable populations, including those with disabilities,” Lorenson wrote. “People with disabilities are more likely, during typical times, to face health, emotional, and financial instability, but during the last two years, those insecurities have become even more apparent.”

Pimentel, a social justice advocate and nun who currently serves as executive director of the Catholic Charities of the Rio Grande Valley (CCRGV), which provides assistance to low-income people in the Rio Grande Valley, addressed the graduates of School of Nursing & Health (NHS).

NHS Dean John Monahan said Pimentel was selected to be a commencement speaker because of her ongoing commitment to social justice and value-based leadership in CCRGV.

“Sister Norma’s internationally known and recognized body of work speaks to a deep commitment to humanitarian principles and promoting human dignity and the common good,” Monahan wrote in an email to The Hoya.

According to Monahan, Pimental’s work demonstrates values that translate to the NHS’ core mission.

“She will serve as a distinguished role model of the ways in which values that matter to our school — like diversity, respect, social justice and value of the common good — can be enacted in a truly meaningful way through a mission-centered career path,” Monahan wrote.

Dewji, Africa’s youngest billionaire and a former member of the Tanzanian parliament, spoke to the graduates of the McDonough School of Business (MSB).

His businesses, MeTL Group and the Mo Dewji Foundation, seek to improve the standard of living across Eastern Africa, specifically in Tanzania, by providing access to education, building stronger healthcare systems, and developing communities.

As a member of the Parliament of Tanzania from 2005 to 2015, Dewji supported efforts to provide clean water, sanitation, mosquito nets and healthcare to all people, according to MSB Dean Paul Almeida.

“His continued efforts to improve the quality of life in his country are commendable and serve as inspiration for us all,” Almeida wrote to The Hoya. “There are so many challenges that business can address head-on — sustainability, technology and the future of work, policy, healthcare, innovation. Dewji is leading in these areas and I’m sure has advice to share.”

Almeida said Dewji is a wonderful example of what it means to be a Hoya and a McDonough graduate.

“Georgetown’s Jesuit values call for each of us to serve the common good. Business leaders like Dewji can seek to be rich in money or rich in spirit, and he has chosen the latter,” Almeida wrote. “I hope our graduates will be able to connect with the idea that in 1998, Dewji was in their seat on Healy Lawn during his own graduation ceremony. He was able to go into the world and make an impact on his organization and in his community.”

“I hope that he inspires other students to pursue similar paths in their futures,” ten Cate wrote to The Hoya. “I definitely believe that the MSB makes it part of its mission to utilize our knowledge to improve the well-being of the general community and to use business to help others.”