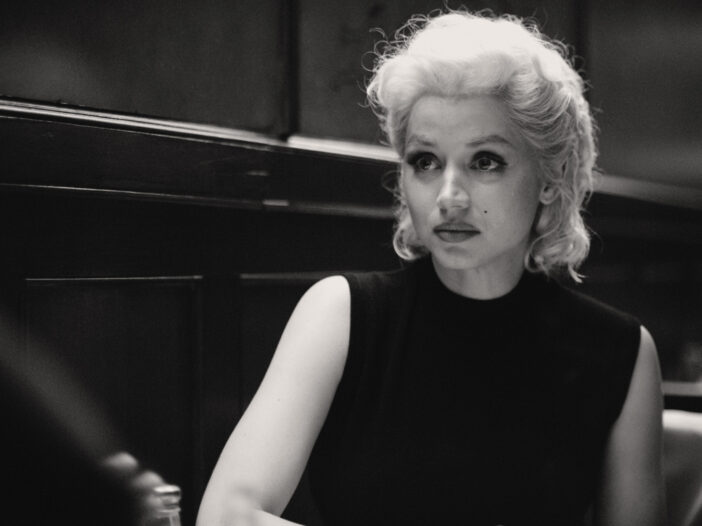 CW: This article discusses graphic sexual violence. Please refer to the end of the article for on- and off-campus resources.

“Blonde,” while marketed by Netflix as a biopic, is historical fiction and a grotesque misuse of the genre. Based on the 2000 Joyce Carol Oates novel of the same title, “Blonde” takes audiences through a sensationalized and aggrandized version of the life of famed model and actress Marilyn Monroe (Ana de Armas).

Pieced together using scenes of extremely graphic sexual violence, sexualized female nudity and mental health struggles — most of which are fabricated to turn Marilyn Monroe and her story into a spectacle — both the film and book depict a Monroe far from the true Norma Jeane Mortenson.

“Blonde” treats Marilyn Monroe like a punching bag, like the sexualized fantasy everyone wanted her to be, like a tragic woman needing to be saved and ultimately like a woman defined through the lens of misogyny. “Blonde” turns Monroe into a subjugated, oppressed, exploited woman who is used as an object of pleasure for men and punished by other women for it.

The film dismisses the beautiful joys and factual struggles of Monroe’s life in favor of offensive and harmful reimaginings, going so far as to film a scene in the very room where the real Monroe passed away.

In just one horrifying example, the film depicts Monroe as having two separate abortions, one forced, which was marked by guilt and trauma, with one disturbing and mocking scene featuring an unborn child speaking to her from the womb. These graphic depictions paint a specific portrait of Monroe and push a thinly veiled anti-abortion rhetoric, despite a lack of evidence that the real Monroe ever had an abortion.

This film and its content raise distinct points of horror. The film’s notion that “fiction” is a justification for abuses against women and other oppressed groups, especially by people with privilege, is ultimately harmful to these groups. Furthermore, there are serious moral implications of misappropriating a real person’s life and story and infusing it with falsehoods for shock and entertainment value.

“Blonde” could have been an emotionally stimulating analysis of fame, womanhood and mental health if it had given de Armas’ Monroe a semblance of agency or autonomy. In “Blonde,” Monroe doesn’t do things; things happen to her.

Instead of portraying how the misogyny of the film industry limited and exploited a powerful and intelligent woman, “Blonde” reduces its subject to exactly what it was attempting to critique: a sexualized, dehumanized rag doll repeatedly raped and abused by the men in her life, ultimately fulfiling the sexist “damsel in distress” trope so many wish to project onto Monroe.

With the film’s controversial and harmful depiction of Marilyn Monroe, a real historical figure, we must also dissect the moral implications of using formerly living people as media with which to achieve spectacle rather than vessels to deliver truth.

“Blonde” and its director, Andrew Dominik, are not concerned with reality or truth. Dominik intended to depict raw, violent feelings and experiences, which is certainly attainable in a fictional space, so the fact that he decided to add to the plethora of abuses against Marilyn Monroe’s memory and legacy raises questions that may never be answered.

Whether Dominik truly wanted to represent the “truth” of Monroe’s emotions or simply depict a wounded, battered version that lives in his mind is up for debate. Dominik pushed “Blonde” through production for a decade and was giving quotes to magazines about the film in 2010.

“Why is Marilyn Monroe the great female icon of the 20th Century?” he told Screen Daily in 2010. “For men she is an object of sexual desire that is desperately in need of rescue. For women, she embodies all the injustices visited upon the feminine, a sister, a Cinderella, consigned to live among the ashes.”

“I want to tell the story of Norma Jean as a central figure in a fairytale; an orphan child lost in the woods of Hollywood, being consumed by that great icon of the twentieth century,” Dominik said.

Dominik’s rhetoric, even a decade ago, reflects the infantilized Monroe that appears in “Blonde,” a Disney princess that receives a plethora of injustices rather than a happy ever after.

Monroe has been so glamorized, fantasized, sexualized and romanticized that we forget she is not a figment of our imaginations with which we can do what we wish; she is just like us. She is a piece of reality, a person who should be treated with dignity and respect.

Many believe that the spirits of the deceased haunt the living, but in the case of Marilyn Monroe, it’s the living that continue to haunt her.