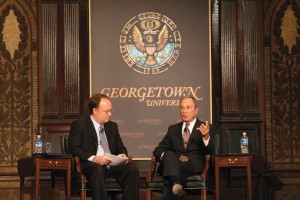 “When Congress voted the stimulus package six months ago, I got roundly criticized for saying it was like buying an alcoholic a drink,” he said in a question-and-answer session sponsored by the Georgetown Public Policy Institute. “But sending a check so everyone could buy a flatscreen Chinese television isn’t exactly producing jobs here.”

“We have some problems, and we are going to have to work through them,” he said. “It’s got to play itself out. The problem is that in the meantime, we have a lot of damage being done.”

Amid the recent collapse of Lehman Brothers, the $85 billion bailout of the American International Group by the federal government and the sale of Merrill Lynch to Bank of America, the Dow Jones industrial average has plummeted more than 7 percent for the week.

Bloomberg did say, however, that a stimulus package focused on infrastructure that promotes domestic employment is an important first step in coping with the crisis.

“We need a strategy that will put people to work and make the kind of investments you need to stimulate the economy,” he said.

He turned to history to highlight examples of positive government contributions toward building infrastructure during economic downturns, such as Thomas Jefferson’s canals, Franklin Roosevelt’s New Deal agencies and Dwight Eisenhower’s system of highways.

Bloomberg, currently listed as the eighth richest American on the Forbes 400 ranking, launched a financial software service, news and data company before his election to New York’s City Hall.

Expressing concern that the financial crisis in the United States may deter foreign investment, Bloomberg said he worries that there may be increasingly less interest in buying American debt.

“It’s not clear who’s going to be buying our debt,” he said. “It may very well be that the next wave is going to come back and bite us.”

Bloomberg also called for a reassessment of the country’s regulatory regime, asserting that government agencies are often ill-equipped to monitor and regulate companies with diverse services, from insurance to investments to banking.

“You always have this problem when government deals with the private sector. In the public sector, you can’t pay people the way you can pay them in the private sector. It looks unseemly,” he said. “So you have a Nobel Prize-winning economist being regulated by someone who is working on civil service salary.”

Bloomberg also raised doubt over what he characterized as Americans’ “want it now” attitude.

“We keep saying we want to have it, we don’t want to pay for it. You can’t go on forever not addressing the key issues in this country,” he said.

During the question and answer session, he pointed to immigration restrictions as one of these key issues in need of reevaluation.

“We’re committing mass suicide in this country by hunkering down on immigration and keeping the people we direly need out,” he said.

Despite the current turbulence on Wall Street, Bloomberg said he was still confident that the markets will recover.

“The best days of America are ahead,” he said.