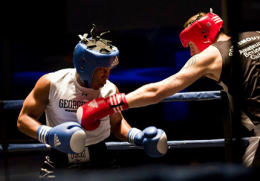 Based on perceptions fueled largely by Hollywood classics like Rocky, Raging Bull and Million Dollar Baby, many Americans think of boxing as a ferocious and bloody spectacle. With that imagery seared into the minds of many, it might be hard to imagine college students in the ring one minute and the library the next.

Yet such a lifestyle isn’t the plot of the next blockbuster script — it’s what 40 hardened fighters at Georgetown do on a daily basis.

Georgetown’s coed boxing club, founded in 2007, has expanded from six to 40 members. It is one of 29 teams in the United States Intercollegiate Boxing Association, which itself has only existed since 2012.

For Georgetown University Club Boxing co-captains Blair Vorsatz (COL ’14) and Adan Gonzalez (COL ’15), the sport offers a unique opportunity to compete against people from across the country, make friends and take on daunting physical demands.

But danger in the ring isn’t simply Hollywood fiction

“Boxing is very different from any other sport or competition. In any competition, you just lose and that’s it, but in boxing, if you lose, you get hurt,” Gonzalez said.

Collegiate boxing matches consist of three rounds of fighting, each lasting three minutes. To withstand the rigors of a match, fighters must be in top physical shape. The Georgetown club works out six days a week, with activities ranging from jumping rope to sprinting, from strength training to shadow-boxing and sparring. Many members also add their own exercises, such as climbing the Exorcist Steps or swimming laps.

“I like the idea of carrying myself as not just a boxer but a fighter that can work through obstacles, work through anything,” Gonzalez said.

But Vorsatz is quick to add that the physical challenges of boxing competitions pale in comparison to the mental strain they present.

“Boxing is a challenge unlike anything else,” Vorsatz said. “I have never been so scared in my life. I have never faced any fear so absurd.”

“The first few moments in the ring are more difficult than the 40-minute runs up the Exorcist Stairs,” team member Kelsey Cobourn (COL ’14) said.

This week, the club is participating in the National Intercollegiate Boxing Championship at the University of San Francisco from last Thursday through Saturday. Excitement for the trip is tempered by the inevitable challenges that lie ahead: Vorsatz, along with seven other teammates, will fight up to three matches each in three days — a feat to which Gonzalez and Vorsatz say Georgetown boxers are not accustomed. With little time to recuperate between fights, the athletes will face the ultimate test to their stamina.

The athletes will also have to make their weight class each morning, which can be a challenge in itself for those hovering between two classes. Many fighters keep strict diets in the weeks leading up to a fight, and some even work out in sauna suits to help shed some extra pounds.

As a relatively small group among the horde of other athletic organizations on Georgetown’s campus, the boxing club receives little in the form of institutional support from the university.

“We do as much as we can with the resources we have in order to put on a good practice. We do not have a location to put a ring, so we use four backpacks to outline one in Riverside,” Gonzalez said.

The team doesn’t even have a punching bag, but its members still manage to train and compete, driven largely by the cofounders’ positive, committed attitude and the club motto, sí se puede, Spanish for “yes, we can.”

“It takes a lot to get in the ring to go fight somebody, and the fact that these are Georgetown student-athletes who are primarily focused on school and still have the time and the motivation and the courage to get in the ring and go at it shows a lot,” Vorsatz said.

To increase its visibility on campus, the Georgetown club will hold the university’s first-ever boxing showcase on April 20. The showcase, which will take place in Yates Field House and involve such groups as the Georgetown University Student Association, ROTC, Veterans Club and Hoya Blue, will be the first boxing match on the Hilltop in more than 65 years. Fighters will travel from England, New York, California, Maryland and North Carolina to face off against 12 Georgetown boxers.

“It’s a boxing showcase and an opportunity for the school to experience and see that the school has a boxing program,” Gonzalez said. “We wanted it to be more than just boxing.

The club has become increasingly diverse in its six years. While males dominate the club, the team has recently attracted a larger female membership as well as members of several ethnic backgrounds.

“My opinion is that there’s this idea of Georgetown diversity, and I feel that part of our club really shows how diverse our school can be. We literally have members from all over the world and all over the country, all ethnicities and races. I feel this event is an opportunity to showcase this as well,” Gonzalez said.

Though she had no prior experience with the sport,Cobourn joined the club in 2011.

“I just saw the table at SAC Fair and thought it was something I might like,” she said. “I asked if any girls were in it. At the time, there weren’t, but two other girls joined my semester.”

The club now has 10 female members, three of whom will be fighting at the national tournament.

“People are surprised to hear I’m a boxer,” Cobourn said. “People expect a certain type of woman to be a boxer. People expect a bigger, more butch girl, but most of the girls on the team do not fit that mold.”

The stereotype is just one of the added challenges that come with being a female boxer. Because the boys outnumber the girls on the team, options for practice opponents are limited.

“When you spar with a guy, they have to hold back a little, and when they don’t, they feel guilty if you get a little bloody,” Cobourn said.

While some members had former boxing or martial arts training, many others join as beginners. Members start the training process with intense cardio workouts and instruction in the proper stance for how to throw a punch. As members advance, they eventually begin to spar, a friendly fight between teammates. Once fighters feel ready, they can enter into competitions like the National Intercollegiate Boxing Championships. All of Georgetown’s members compete at the novice division, except Gonzalez, who fights in the more advanced open division.

While members fight across different levels, there is strong camaraderie on the team.

“When I was a freshman, there were six guys on the team, and we all just happened to box. We were friendly, but we weren’t friends. We all just loved boxing,” Vorsatz said. “Now, after two years, the team has become one big family who comes together to fight in the ring.”

But despite the familial bond, no one on the team forgets that they are there to fight. After 30 minutes of joking and laughing as the team jumps rope to begin practice, the team members put on their gloves and headgear and begin to fight each other. Friends who were just bonding over a funny story are now punching each other and grimacing in pain.

“At the end of the day, we are part of the boxing program, regardless if someone is learning how to throw a jab,” Gonzalez said. “I think it’s really preparing the fighters with the skills and the confidence they need outside of the gym, either in classes, internships or careers in the future.”

And for many, the rewards of meeting like-minded people are the sweetest that club boxing can bring.

“I love the bonding experience of fighting. You go into a fight and you literally think, ‘I will kill the guy across from me,’ and you try to do that all three rounds,” Vorsatz said. “Afterwards, you give him this massive passionate hug that says: ‘I love you man. I understand you.’ And you are great friends after that. There is nothing else in the world that puts you against each other and brings you together like that.”