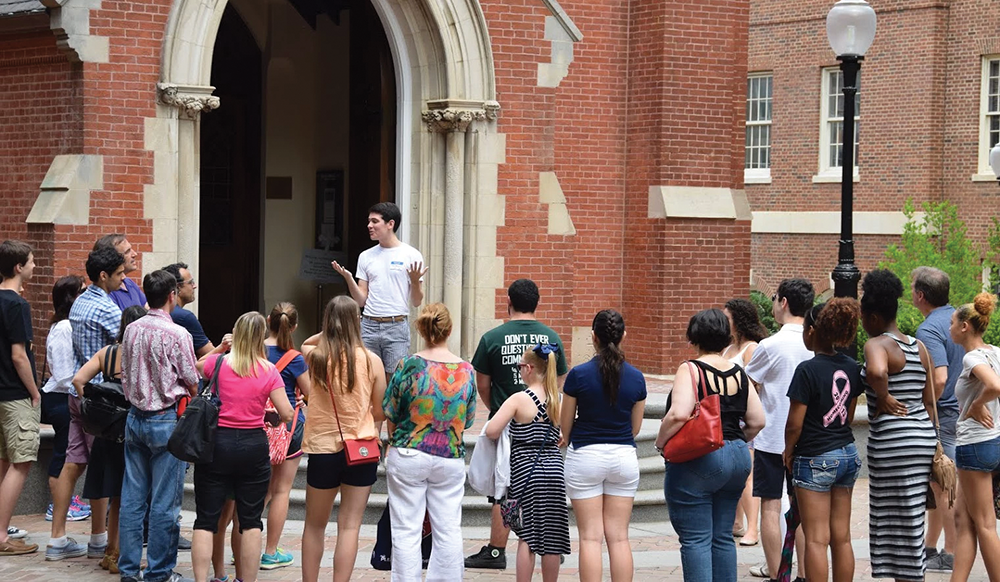 The Blue and Gray Tour Guide Society will not hire freshmen this fall as part of a new recruitment policy designed to ensure all tour guides have sufficient experience as a college student.

Blue and Gray confirmed to The Hoya that it will not accept students who have not yet finished a semester at college. The organization will continue to accept transfer students in their first semester at Georgetown.

The organization made the announcement on its Facebook page on Sept. 1, seven days before the Club and Activities Fair, where freshmen are given the opportunity to learn about student organizations on campus.

“We ask that [freshmen] take one semester to gain further personal experiences at Georgetown to help draw from when speaking to perspective students and families,” the group’s post said.

Blue and Gray is one of several highly selective clubs, along with Students of Georgetown, Inc., commonly known as The Corp, and Georgetown University Alumni and Student Federal Credit Union, that has come under fire for exclusivity and lack of diversity over the past five years. Annually one of the most competitive clubs on campus in terms of admission, Blue and Gray recorded a 10.2 percent acceptance rate in the fall of 2016.

Last year, Blue and Gray took steps toward improving their organizational diversity, altering its application questions in January 2017. Leaders of the organization were also part of an informal working group on club exclusivity with members of other student groups including The Corp, GUASFCU and the Georgetown University Student Association. The working group hosted a public forum in December 2017 to address club culture at Georgetown.

Blue and Gray declined to release the acceptance rate and demographics of the applicant pool last fall as part of an ongoing effort to combat club exclusivity. The Hoya has previously requested admissions information from Blue and Gray in 2017 and 2018.

Despite the change in policy, Blue and Gray recruitment coordinator Aidan Fallon (SFS ’19) said the decision to refrain from hiring freshmen this fall will not considerably affect the selection process for other applicants.

“As in past years, Blue & Gray will consider all applicants equally, regardless of factors such as class year. We believe that this will allow all applicants to speak from personal experience during the interview, which will help them to deliver a clear and coherent statement,” Fallon wrote in an email to The Hoya.

In addition to giving time for freshmen to gain experience for their interviews, this change will also benefit them and the university by allowing students time to gain familiarity with the campus before giving tours, Fallon wrote.

“While previous freshman fall hires have been wonderful, we believe that this policy will allow all applicants the ability to speak from personal experience when interacting with prospective students and their families, helping to deliver the best visit possible to the diverse populations our campus welcomes every year,” Fallon wrote.

Elizabeth Hyman (COL ’21), a Blue and Gray tour guide hired during her fall semester freshman year, said she enjoyed her first semester, but also said she could have benefitted from waiting a semester before applying.

“Being hired freshman fall was exciting and a great way to meet people right off the bat, but I don’t think I completely realized all the time I was going to have to commit to blue and gray,” Hyman wrote in an email to The Hoya. “Having a semester to learn more about the program and the school would have been beneficial.”

Blue and Gray started considering the policy change in April, and spent time deliberating with the Office of Undergraduate Admissions before making the decision Sept. 1, Fallon said.

“In consultation with the Executive Board and the Admissions office, we discussed different rationales for implementing this decision,” Fallon wrote. “These considerations include the ability of applicants to speak from personal experience on tours, allowing freshmen students a full semester to transition to college before diving into the application process, and the comfortability of applicants in navigating the campus prior to leading tours.”

Multiple students, though expressing their disappointment, said they acknowledge the validity of Blue and Gray’s concerns. Emilia Game (SFS ’22) said though she was disappointed to find out she could not apply this fall, she accepted the rationale for the policy.

“As disappointing as it is not to have the option to apply for Blue and Grays as a freshman, I do understand that we will not be able to offer as much as older students when it comes to being a Tour Guide,” Game wrote in an email to The Hoya.

Isabelle Wisco (MSB ’22) said she did not feel she would be comfortable giving tours yet.

“Seeing that I’ve only been here for a couple weeks, I do not feel equipped to present the school to a group of prospective students and parents. For those who have family history with university, it may be different, but given my lack of experience, I understand Blue and Gray’s decision,” Wisco wrote in an email to The Hoya.