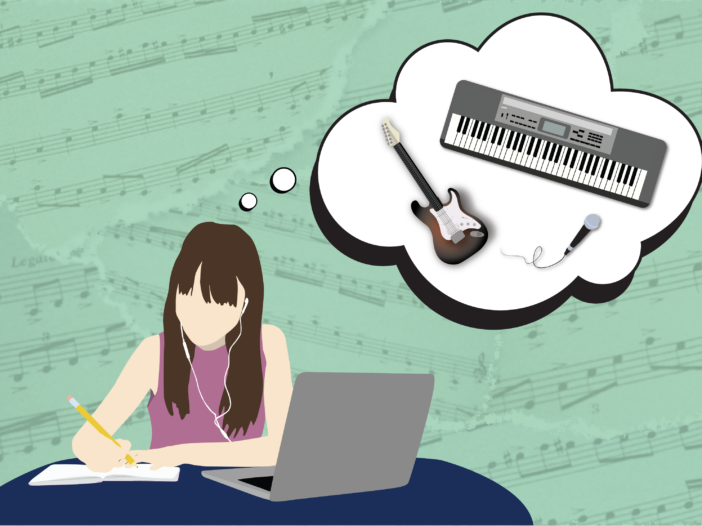 During online school last year, George — known by her stage name “Sophia Marie” — found herself with an abundance of free time in her Los Angeles County home. To fill the time, George turned to a long-time passion project: songwriting.

“I realized that there was so much I took for granted. So I just wanted to start songwriting. I’ve always wanted to make music, so I started doing that in August of 2020,” George told The Hoya. “By the time spring 2021 came around, over quarantine, I’d written 70 songs.”

George said the COVID-19 pandemic brought with it expanses of extra time, allowing her to finally pursue songwriting alongside her schoolwork and other campus commitments.

Across campus, talented students like George are walking out of their “Borders and Security Concerns,” “Organic Chemistry” and “Problem of God” classes and sauntering straight into the studio, choosing to pursue their artistic talents despite the academic and professional pressures of student life. Thanks to the talents of these artists, as well as support from organizations like Prospect Records — a student-run music label — the music scene on the Hilltop is alive and well, offering a place for musicians to explore their passions and escape the pressures of class, work and clubs.

After long days of Zoom classes in desolate bedrooms, many Georgetown students found themselves in search of something to relieve them of the stresses of living in a pandemic. For some students, this meant diving deep into their psyches for inspiration for songs and reconnecting with old friends to create new musical memories.

COVID-19 isolation became an opportunity to truly devote oneself to music. For George, having an abundance of time during quarantine meant there were many new opportunities to sit down and workshop her songwriting.

Drawing inspiration from pop queens like Lana Del Ray and Taylor Swift to bands like TV Girl and even a romanticized cosmopolitan lifestyle, George chose to escape into her own lyrical world during the profound disruption of the pandemic.

“So during quarantine, I was like, ‘Oh my god I have to be this person I want to be.’ Music was what totally allowed me that because it was something I always wanted to do but I was like, ‘I don’t have time to do this.’ And I was like, ‘Well, yes, yes you do, you have no excuse not to do this,’” George said.

George recently released the fruit of her labors, her single “Venice Beach to D.C.,” in which she reflects on the transition from a beach-based California existence to life in the nation’s bustling capital.

For other student artists, like Fabiola Castro (COL ’22) music was a place of solace in a world made even more tumultuous by the pandemic.

“Music was my escape and my way of exploring how I was feeling or looking deeper into the things that I wouldn’t have thought about or explored enough before. It was like a comfort,” Castro told The Hoya.

Castro graduated in December 2021, shortly after releasing “a la temporada,” an album available on Spotify and Apple Music. The album, created for her senior capstone project as a music major, and inspired by Castro’s favorites like The 1975 and Depeche Mode, explores and articulates the emotional journey she took over her college experience.

Castro had been involved with the music department at Georgetown throughout her entire college career prior to the pandemic, so losing access to the music community because of COVID-19 was painful.

“I would see videos of, like, violin players playing on their balcony, so that people could listen to them from across the street or something, or I had a professor tell me how he would just sit out on his front porch and play guitar with his neighbor,” Castro said.

Like George, Aleksander Sas (SFS ’23) also found himself with a lot of free time as the pandemic broke out in 2020. Quarantine gave him a chance to reconnect with childhood friends. The longtime pals used this time to form their band, N0clue.

“We reconnected over COVID because everybody was bored, everybody was super depressed. You know, it’s like May, June 2020. So my buddy Neel asks, ‘Does anybody want to jam?’ And so from that one line, six weeks later, we’re publishing our first album,” Sas said.

N0Clue, drawing inspiration from artists like Daniel Caesar and Mac Miller, as well as Sas’ memories of dancing in his kitchen to Michael Jackson, used music as a way to strengthen old friendships in a time when connections were difficult to maintain. The friends have kept up their musical endeavors and are currently working on their third project. N0Clue plans on releasing a new album in summer 2022, according to Sas.

Meanwhile, on Georgetown’s campus and away from his childhood friends, Sas is expanding his harmonical horizons individually.

“I’m starting a solo venture here at Georgetown through Prospect Records called Happy Medium,” he said. “That should be fun. I’ll be performing a lot of open mics on campus. And then there’s a lot more from local coming as well. And another LP this summer.”

Andres Alfonso (SFS ’24), also took his quarantine scribbles to the recording studio, developing a series of songs beginning his first year at Georgetown.

“I always wanted to write my own music, so there was always this tension between that but I never had the time to. Because of the pandemic, that really gave me the time I needed to actually work on stuff,” Alfonso said.

For Alfonso, it was not the COVID-19 pandemic that stirred his love for music, but another disaster entirely.

“So, I started playing music like six years ago, because I picked up the guitar after my family lost power during Hurricane Irma. And so I was just bored. And I kept on doing that. I just didn’t stop practicing,” Alfonso said.

Now on campus, Alfonso explores his musicality under the name “ARAUJIA.” His project, inspired by his favorite rock bands like Radiohead and The Cure, is a self-described DIY venture. Alfonso is the Renaissance man of Prospect Records, writing, recording and producing all of his own music.

But, according to Alfonso, it’s been difficult to strike a balance between Georgetown’s academic rigor and creating new music, something that Prospect Records has stepped up to help on-campus artists find for themselves.

Turn Up the Volume

Coming back to campus in fall 2021, students went from having all the time in the world to work on music to having to refocus their attention toward school work in order to meet the demands of an in-person college experience. This change left students in need of an on-campus outlet to continue working on their music.

Though music comprises an important part of many students’ lives, its role on Georgetown’s campus has often been pushed aside in favor of other clubs and activities. Despite their talent, passion and hard work, the student musicians on campus are still searching for more recognition for their art, according to Sas.

“Truly, I’m disappointed. I wish there was a stronger music community,” Sas said. “There’s not a whole lot unless you’re directly affiliated with the music department. There’s so many crazy talented people who study computer science, so why should you limit it just because you don’t have time in your schedule for a minor or major?”

Searching for a way to share their newly developed talents with their Georgetown peers, many student musicians have found a home within Prospect Records, a student-run record label that represents N0Clue, Castro and Alfonso, among other musicians.

Bringing the recording industry to Georgetown, Prospect Records ensures that student musicians have access to resources to benefit their passion on campus, according to Linnea Petropoulos (COL ’22), president of Prospect Records.

“We help them with anything that they may need for their music and their music career, ranging from recording to marketing, to photoshoots and filming music videos, to merch sales to actually getting their music uploaded onto Spotify and other streaming services,” Petropoulos said in an interview with The Hoya.

Prospect Records was founded in 2019 to offer Georgetown students the opportunity to explore music in a professional environment without the added cost of studio fees and agents, as well as to help foster a larger musical community on campus.

“Our goal is to provide a fun and creative outlet for artists and also to support them in. We give them space where they can create art and also share that art with each other,” Petropoulos said.

Since joining the club her freshman year, Petropoulos has seen tremendous growth in the size of the label’s membership — from 12 members to over 100 in 2022 — reflecting the increase in interest in music on campus.

“It is definitely growing and establishing itself. When I was a freshman, it felt like there weren’t a lot of ways for student musicians to meet each other and to really make being a student musician part of their identity or part of their Georgetown career,” Petropoulos said. “So we’re becoming more ingrained in Georgetown by working with the departments and working with other clubs such as Radio and GUCCI.”

Aside from physical resources to film music videos or record music, Prospect Records provides Georgetown’s student musicians with a community of like-minded individuals. Not only does this enable students to form bonds with others who share their interests, it allows them to collaborate on their art and learn from one another, according to Alfonso, who has been part of Prospect since his first-year spring.

“I still want to keep on going with the [independent] project and getting better at production. But I also want to try and experiment more in a band setting which is why I’ve joined Prospect Records. Getting more involved with them to, you know, meet with other musicians, work with them and see what comes out of it,” Alfonso said.

Creating an official club that centers around both individual and collective musicality allowed artists to find their place in campus culture that often focuses on other extracurriculars, according to Katelyn Barr (SFS ’22), a musician that has worked with Prospect Records since its beginnings and had a song go viral on TikTok last March.

“It’s really helped me connect with different types of people that I wouldn’t have had the chance to without music,” Barr said in an interview with The Hoya. “And really, it’s been inspiring to see these people, you know, for me as a first-year being so lost and not knowing what to do, or as a sophomore to actually seeing people go through the same things I went through and starting to make music here. So it’s just been really a great community that’s grown a lot in the last four years, and I feel very lucky to be a part of it and see that growth happen.”

This increase in community forges a new spark of belonging among the members, one that will hopefully continue to give the arts more of a presence on campus, according to Barr.

“Even if I’m not always collaborating with people, it’s also nice to know people are out there that have the same interest as you and that kind of thing,” Barr said.

Whether it’s watching an open mic, streaming on Spotify or joining Prospect Records, students have found that the music community at Georgetown is one that is worth the investment, Castro said.