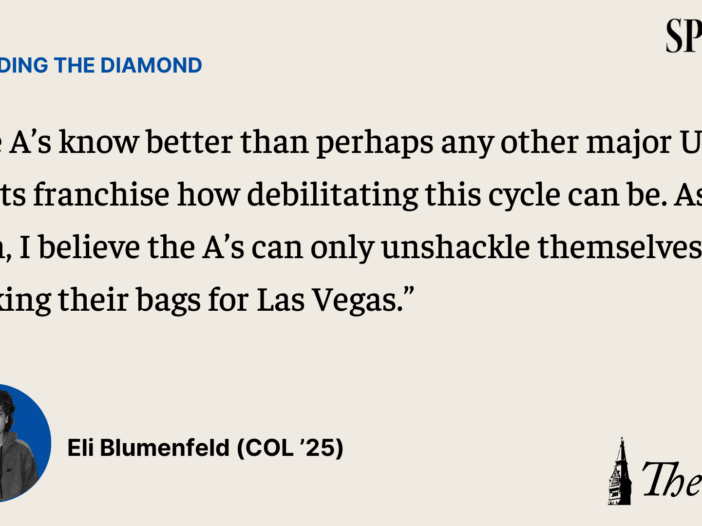 The Oakland Athletics are as good as gone from California, according to an Oct. 29 announcement from MLB Commissioner Rob Manfred. The club will likely be moving to Las Vegas among other potential hosts, Manfred said.

The NFL’s Oakland Raiders were the first professional sports franchise to abandon the Oakland Coliseum — which, like the actual Colosseum in Rome, is in absolute ruins. Vice President of Stadium Operations David Rinetti reported the presence of feral cat feces, a moth infestation, mold, broken seats and plumbing and water leaks at the stadium in his May 12 letter to the Coliseum Authority executive director.

The dilapidated Coliseum has struggled to bring fans to the stadium. This past season, the stadium averaged just 9,849 people per game, the lowest average in MLB since the 2004 Montreal Expos, who moved to Washington, D.C., for the start of the next season.

Ultimately, I think leaving the small Oakland market will be the right decision for the A’s.

Because of the particularly hyper-localized nature of baseball, a team’s ability to draw crowds to its stadium is crucial to maintaining its financial health, as most people outside of Oakland don’t tune in to watch the A’s broadcast. The A’s also traded away most of their star power in recent years, losing the draw of players such as Matt Olson, Matt Chapman and Sean Manaea. As a result, the problems associated with small fan bases are magnified by underwhelming play on the field.

This does not mean that small market teams are not feasible. However, a city must make a concerted effort to support its team or risk seeing it move away.

The Green Bay Packers and San Diego Padres — both of whom excel in fan attendance despite their small local markets — demonstrate that a community’s embrace of their franchise is crucial to that team’s success.

Of course, other factors beyond a team’s ability to connect with their fan base are at play in ticketing success, such as a city’s transportation infrastructure surrounding its stadium and the population’s access to leisure time.

For teams like the A’s, the trend of losing games and seeing low ticket sales is cyclical — the easiest way to bring in a crowd is to win, the way to win is to spend more money and the way to get more money is to sell more tickets. More spending, whether it be on stadium improvements or contracting star free agents, naturally attracts more ticket buyers.

The A’s know better than perhaps any other major U.S. sports franchise how debilitating this cycle can be. As such, I believe the A’s can only unshackle themselves by packing their bags for Las Vegas (a move that is seldom a responsible decision when it comes to financial needs).

It’s unfortunate that the A’s will have to abandon the culture and legacy they have established in Oakland, but the MLB is ultimately a business — a business that relies almost exclusively on how many people watch its product — and moving the A’s to Sin City will almost certainly attract a higher viewership on all levels.

The recent addition of the Las Vegas Golden Knights to the NHL exhibits the city’s demand for major league sports teams. The fact that Vegas’ minor league baseball team, the Aviators — that are funnily enough the A’s AAA affiliate — enjoy the ninth-largest average attendance in all of Minor League Baseball also proves the city’s particular enthusiasm for baseball.

Sorry Oakland, but an exodus was all but inevitable. At least you still have Moneyball (one of the greatest movies ever, in my opinion) and some sick uniforms.