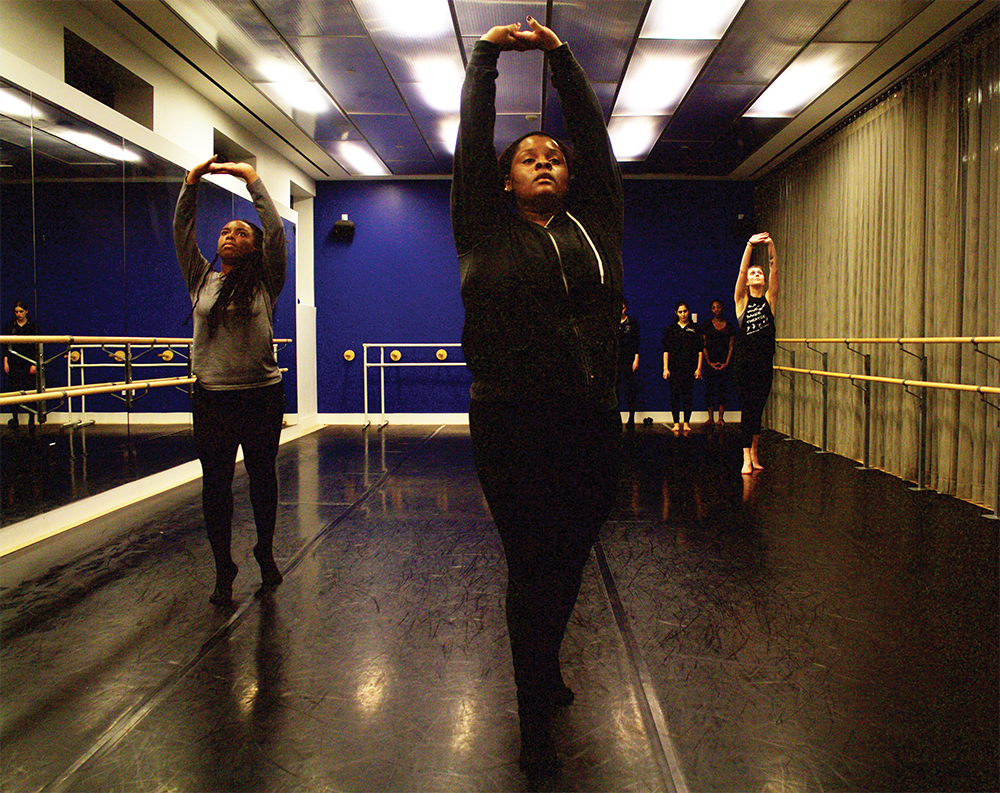 In celebration of its 35th anniversary, Georgetown’s Black Movements Dance Theater presents “Defiance,” the company’s final production for the 2016-17 season. The dance concert, “an exploratory journey of truth and celebration,” will take place at 8:00 p.m. from Feb. 24 to 25 at the Gonda Theater.

The self-producing company has celebrated both dance as a vital art form and the history of the black community in Georgetown for 35 years. Through forceful, poetic movements, “Defiance” is set to explore a series of issues in relation to the black experience. The concert moves from its exploration of difficult subjects, such as the examination of police brutality and racial inequality, to cheerful celebrations of boldness and grit.

“We chose the theme ‘Defiance’ primarily because we were thinking about the state of black America in 2016. It was the height of the election season, coming right from the Olympics,” student co-director Elizabeth Erra (COL ’17) said. “We thought about different ways that African Americans and black people in general defied stereotypes, defied norms and set the stage for the upcoming year of 2017.”

Additional inspiration came from the duality of challenge and success that minorities across the country experience. In terms of racial discrimination and prejudice, “Defiance” found its roots in a series of events that embodied both historic courageous attempts to challenge stereotypes and the prevailing difficulties that continue to surface.

“The directors were also inspired by the new African American museum, and how the architecture of it is defiant in itself,” student dancer Madeleine Keefe (COL ’17) said. “After the election, there was a growing inspiration to continue with this theme and speak about against some of the current inequalities in terms not only of race but gender, socioeconomic backgrounds, etc.”

Although “Defiance” stems from complex social discrepancies among Americans, as well as persisting issues of racial inequality, the directors emphasize the universal nature of the pieces. Erra said that audiences will be able to connect to the concert in a both a fundamental and a contextual level.

“You can think about defiance as anger, or as something empowering, defying your parents’ expectations. There are so many different interpretations to it,” said Erra.

BMDT seeks to foster a dynamic conversation about topics that are often difficult to discuss openly. By using a universal medium, like dance, the company strives to create open dialogue, creating pieces that encourage people to talk to one another and to react to each other’s struggles with empathy.

“We certainly don’t want to confine our concert to racial inequality. This is how group A feels and this is how group B feels, because that is not what our company is about,” student director Ashley Newman (COL ‘18) said. “We want to create dialogue between different groups, different minorities, and dance is one of the best ways to express distinct opinions and experiences.”

This unifying mission appears particularly relevant with regards to the increased levels of polarization and estrangement in America.

“I think dance can speak to everybody. Everybody likes to watch dance; everybody loves to dance,” Newman said. “Especially in the current political situation of our country, I think it’s even more important to have these ways of expressing yourself. With the positivity effect, defiance is a very important idea right now. For a lot of people, this administration is a hard thing to watch, and standing against negativity and prejudice, becoming more politically active, those are acts of defiance too.”

This anniversary concert draws its “defiance” from its founders — four black female students who knocked the existing barriers in Georgetown, creating an inclusive space that addressed their needs as both dancers and minority students. Artistic Director Alfreda Davis sees the preservation of such a bold legacy as one of BMDT’s main goals as an institution.

“The four courageous women who started this company wanted something that would reflect their story,” Davis said. “Everyone wants to be included; no one wants to be on the outside looking in, because, while we have similarities, we also have differences, and it felt that our voice wasn’t being projected, wasn’t being heard, and there wasn’t anything that represented them.”

“Joy’s piece is about girls who don’t have access to education in different parts of the world,” Erra said. “It is about what it means to learn how to read and write, and that’s an act of defiance.”

On the other hand, Ashley Newman’s (COL ’18) creation discusses the role of beauty standards in racial discussions in America.

“Her work is really about loving yourself and finding confidence in who you are. She really speaks to the conversation of race, in terms of ‘if you are a particular race, love yourself as you are,’” Davis said. “Because everything is about how small you are, how thin you are, how straight your hair is, how tall you are, how short you are and that can become very dangerous.”

Lastly, Davis points to “Defiance” as not only a beautiful art form to delight audiences but as a powerful medium for important messages.

“I always want us to have a message. Dancing for fun is great, but, if you can walk away and feel good, feel inspired, or feel that you can carry that conversation somewhere else, then I feel that I’ve done my work,” Davis said. “I want our message to resonate with everyone, no matter what your socio-economic background is, no matter what your ethnicity is. Our message can resonate with whoever comes to our performances.”

In short, as BMDT promises, “Defiance” will “lift the spirit, stir the soul, and open the mind.”