Jamaica— hearing that name immediately conjures up images of white sand beaches, blue waters and the legend of Bob Marley. The man who introduced reggae to the world has posthumously managed to do it again. His latest album, Live Forever: The Stanley Theatre, Pittsburg, PA, September 23, 1980(Live), manages to capture the very soul of reggae. This latest album features Bob’s best songs, including “No Woman No Cry,” “Get Up Stand Up” and “Is This Love.”

Devoted fans will not be disappointed: Bob Marley and the Wailers deliver a flawless performance. Though this music is from 1980, the sound is pristine and authentic. It is clear that the band puts every effort into delivering a good show to its audience. The strength of both Bob’s vocals and the I-Three’s backup is truly impressive. There is something for everyone on this latest release: from the slow, revolutionary harmonies of “Redemption Song,” to the romantic melodies of “Is This Love” and the upbeat “Jamming.”

After the passing of what would have been Marley’s 66th birthday on Feb. 6, this album is the best way to commemorate his extraordinary talent that lingers on long after his passing. Far better than any T-shirt or poster, this album lets you carry the sounds of reggae with you always. This timeless collection of songs has survived generations since their initial release about thirty years ago in the 1970s.

Let the music of Bob Marley and the Wailers captivate you. This album will be your magic carpet; discover a whole new world.

This is the perfect soundtrack for spring break. It is exactly what you need to forget the stress and tension of midterms and ease into a week of fun, carefree days. Close your eyes. Let this album take you to the entrancing shores of Jamaica, no matter where you go for spring break. Even if your break is a “staycation,” Bob will keep you “jamming” all through the night. 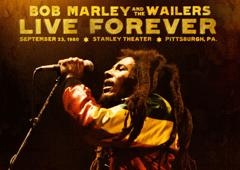