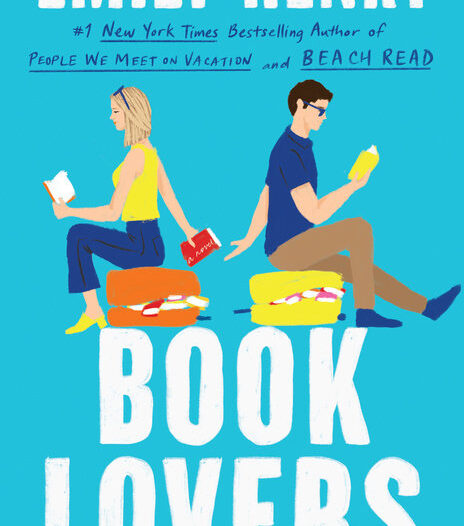 If you have ever watched a Hallmark movie and wondered what happens to the uptight corporate girlfriend who is left by the male love interest for the bubbly small-town protagonist, then I come bearing good news: Emily Henry has answered your question.

Henry’s third adult romance novel, “Book Lovers,”  follows the life of Nora Stephens, a cutthroat literary agent who has platinum blonde hair almost as icy as her heart. After a series of unfortunate breakups, wherein Stephens finds herself on the unfavorable side of the romance tropes she knows all too well, she has all but decided to swear off looking for love. And she most definitely is not looking for it in brooding Charlie Lastra, a successful editor and her professional nemesis.

However, it is just Nora’s luck that a month vacationing with her sister in the small fictional town of Sunshine Falls, North Carolina leaves her bumping into Charlie left and right. In line with the ever popular enemies-to-lovers plotline, Nora and Charlie’s continual and annoying run-ins escalate to something more.

The narrative brilliance of “Book Lovers” lies not only in Henry’s mastery of pacing, but in the novel’s keen sense of self-awareness. In a book centered around subverting tropes, Henry repeatedly succeeds at breathing new life into otherwise banal plot elements. The setting of “Book Lovers” is indulgently cliché; Sunshine Falls embodies the quintessential small-town experience including gossip, family drama and cheesily named local businesses such as the favorite town bar, “Poppa Squat.”

To top it all off, Nora’s sister even creates a small-town checklist for her and Nora to complete that seems handcrafted to land Nora in Charlie’s company. Henry leans into this and pushes clichés in order to further the plot by contrasting the characters with the overused setting. The descriptions of the city-dwelling pair braving the countryside then add necessary levity to the seemingly hackneyed setting.

Nora describes herself as the “foil to the Good Woman.” In her quest to disrupt literary norms, Henry elegantly characterizes Nora as a cynical anti-heroine to deconstruct sexist stereotypes rampant in contemporary society. Henry tackles how powerful women are often seen as bitchy, cold and otherwise unpleasant while their male counterparts receive no such criticism. Nora’s ex-boyfriends serve as a commentary on men who fear women that are their equals. Her past relationships provide a stark contrast to her connection with Charlie, who treats her like an equal.

Henry has developed a fiercely loyal following for her character-driven novels and “Book Lovers” is no exception. Charlie and Nora, Henry’s most well-rounded main characters to date, effortlessly deliver the snarky, humorous banter that her readers have grown to love. Henry’s refreshingly modern dialogue is shown in the pair’s expertly exchanged barbs via their work emails. Their back-and-forth dynamic is enhanced by the fact that Charlie and Nora are cut from the same sarcastic, workaholic cloth and therefore equally matched. Their embodiment of two sides of the same coin also allows Henry to seamlessly blur the line between love and hate as their antagonism evolves into flirtation. These characters understand each other to the very core, allowing them to embrace both their own and each other’s fallibility.

The end result is a flawed, incredibly human element in their relationship: an element that many other romance novels lack and that is sure to resonate with readers.

However, “Book Lovers” shines the brightest in its very ability to poignantly speak to universal experiences of being a reader. Authors love to write books about books — after all, they know the audience they are pandering to. The novel’s title IS the target audience. There is an earnest understanding of what it means to love books from all sides of the industry. Henry provides an insider perspective on the publishing industry from Nora and Charlie’s respective agent and editor positions. Henry even throws in a few good-natured jabs at the volatile temperaments of the authors publishing teams work with—all of this is done, of course, with the intent of showing how much passion and care is put into the development of every book that lands on shelves.

“Some books you don’t read so much as live,” Nora says in an internal monologue.

Henry perfectly captures the aspect of the reading experience that keeps her readers coming back for more — they will want to eat and breathe “Book Lovers.” In an almost meta-literary experience, Henry is able to artfully articulate the feelings experienced by her readers as they progress through the novel. True to her no-nonsense form, Nora refuses to start a book until she reads the last page and determines whether the novel is worth committing her time. While Nora’s ending-first method may be necessary for other stories, rest assured, “Book Lovers” is well-worth the investment starting from page one.