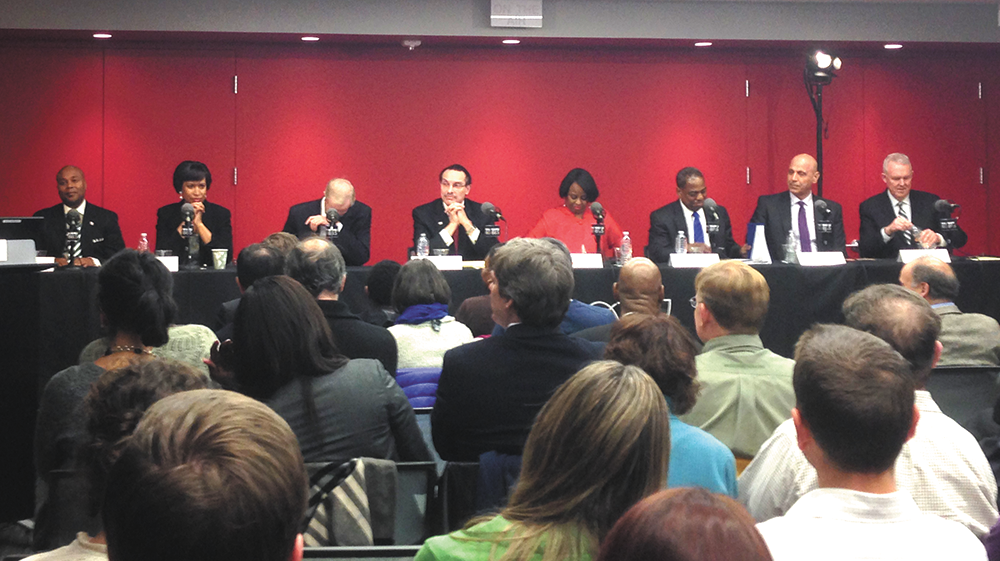 At the last mayoral debate featuring Mayor Vincent Gray on Jan. 31, Democratic candidates vied to emerge as the frontrunner against the incumbent. During a debate broadcast live from 88.5 WAMU’s media center Wednesday, however, Councilmember Muriel Bowser (D-Ward 4) was the woman to beat.

An NBC4 poll released Tuesday put Bowser only eight points behind Gray with 20 percent of the vote to his 28 percent. Councilmember Jack Evans (D-Ward 2) trailed in third with 13 percent.

After receiving endorsements from both The Washington Post and pro-choice political action committee EMILY’s List in recent weeks, Bowser is now viewed as Gray’s biggest challenger in the April 1 Democratic primary.

Bowser, who spearheaded the 2011 bill that created an independent board of ethics for all city officials, led the critique of the possible ethics violations and corruption related to Gray’s 2010 campaign.

“A message has been sent that there is a new sheriff in town, and you will be punished whether you are a member of the D.C. City Council or a front desk worker at a District recreation center. You will be punished for wrongdoing,” Bowser said.

Gray was quick to deny any role in the alleged wrongdoing when pressed on the issue, as he has throughout the campaign.

“The documents that have been asked for have been given, and the cooperation with the investigation has either come through me or my attorney. I will assert, once again, that I did nothing wrong,” Gray said.

The mayor took numerous shots from opponents on other issues, including on his education platform.

“The reason why you see such an active role taken by the council on the issue of school reform is that there has been a void in leadership at the top,” Bowser said. “We’re not seeing the same kind of intensity on the issue from the mayor’s office or the superintendent’s office.”

“I’m concerned with the current education committee trying to micromanage how we run our schools in the District of Columbia. We work with the chairman on various issues, but I don’t believe Councilmember Catania or any other member ought to be involved in trying to run the programs of our public schools,” Gray said.

Though Catania has yet to declare his candidacy, he is considered a serious candidate for the November general election.

In one of the evening’s most heated exchanges, Wells criticized all the candidates and Bowser and Gray in particular for accepting corporate contributions to their respective campaigns.

harshly scolded the Council for delaying the election of an independent attorney general for the District, saying that the delay underscored the reason why so many D.C. citizens view corruption as the norm in city politics.

“We have no laws, and we have no order in the District of Columbia. It will take someone who is an outsider, not part of the political establishment, to give the citizens of the District what they finally deserve, which is a clean and ethical government,” Lewis said.

In light of the 135 percent increase in homeless families seeking shelter in D.C. facilities this past winter and the District’s mandated right-to-shelter policy on freezing nights, candidates discussed reforms to D.C.’s homeless policy.

Shallal was quick to address the need for a preemptive plan to avoid leaving people out on the streets, especially in the winter.

“The mayor’s plan is tough, but there’s certainly no love there. I think we’re a more compassionate city, and I’d like to see us be that way. Leadership is about anticipating crises, not answering to one fire after another,” Shallal said.

Allen, recounting his own experience with homelessness, called for a better system of communication to make the options offered by the city more widely known.

“I was homeless once in this city. I know what it’s like to get back on your feet. What is missing is communication between the city and those people out on the street to let them know that there are resources available to help them move forward in their lives. It’s all about bringing compassion back to this city,” Allen said.

In a post-debate interview with The Hoya, Bowser attributed her rapid accession recent polls to her campaign’s offer of a new vision for the city that focuses on continuing the District’s recent prosperity and mending the trust that’s been eroded between the government and the people.

“The people of the District want a government they can be proud of. My campaign is about continuing the progress we’ve seen in terms of economic development and growing the middle class, but we have to have the right leadership to get those things done,” Bowser said.