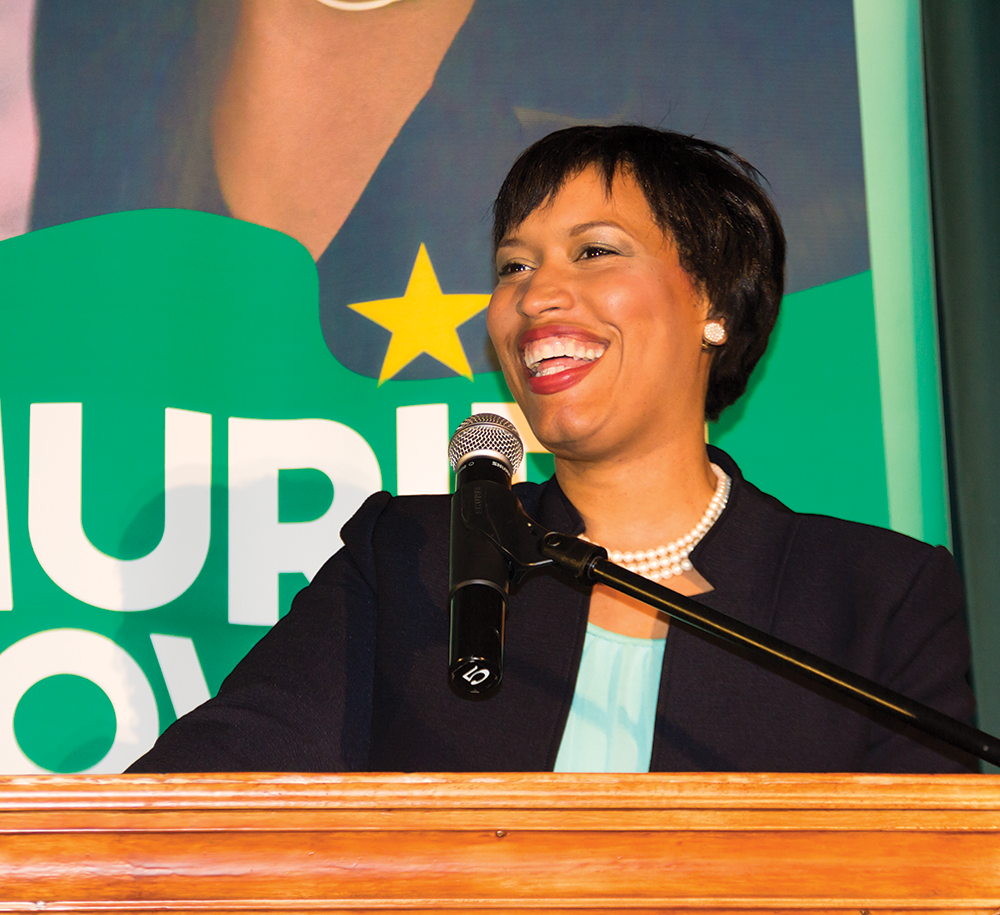 Muriel Bowser, an upshot D.C. councilmember representing Ward 4, won the D.C. Democratic mayoral primary Tuesday with 44.2 percent of the vote, bringing the administration of Mayor Vincent Gray to a close and catapulting Bowser to the position of presumptive mayor in a city where winning the Democratic primary is almost always akin to winning the general election.

The lowest voter turnout in 30 years, dipping below 32 percent, coupled with slow election returns Tuesday night prevented Gray from conceding the race until after midnight. Up until a few months ago, the race seemed firmly within his grasp.

With a 12-percent edge against Gray’s 32.3 percent, Bowser has earned a strong endorsement from D.C. Democrats heading into the November general election. In large part, Bowser was able to soundly defeat Gray by racking up large margins in the voting precincts Gray lost in the 2010 elections. Ultimately, Bowser won 28 precincts that Gray had carried in 2010, most of them in Bowser’s home turf in Ward 4, which encompasses the north corner of the city.

Additionally, Gray’s vote total in Ward 8, considered his strongest area of support, decreased by 6,590 votes from 2010. As his support waned in the campaign’s closing weeks, Gray made a last-ditch effort to rally voters east of the Anacostia River, travelling to Ward 7 to cut the ribbon at a subsidized housing complex on Minnesota Avenue, NE and visiting a church in Ward 8, whose pastor, C. Matthew Hudson, praised Gray as the “best mayor this side of heaven.” However, despite his success in Wards 7 and 8 in his last election, Gray’s efforts this year could not stem the rising tide against him elsewhere in the city.

Bowser was able not only to defeat Gray, but also to separate herself from a field of six candidates, including three other councilmen, Jack Evans (D-Ward 2), Tommy Wells (D-Ward 6) and Vincent Orange (D-At Large), by distinguishing herself as a fresh, energetic politician able to gain traction across the District’s disparate eight wards.

“All eight wards is not a slogan. We’ve tried to demonstrate that physically by where we chose to have our election night rally [at Imagine Southeast Public Charter School in Ward 8] and where we chose to open campaign offices. We’ll be out there again before the general, in all eight wards across the city, knocking on doors and listening to voters. It will be a focus on the entire city, and that’s also how Muriel intends to govern, and I think that’s the most important thing,” Bowser’s campaign manager, Bo Shuff, said.

Shuff attributed the support for Bowser’s campaign to her clear vision for D.C., including more efficient school reform, increased vocational training and stronger protection for the middle class, as well as honesty in government.

“I think other candidates’ supporters realized that they had far more in common with Muriel than they did with Mayor Gray and wanted to see those types of changes and reforms brought to city hall,” Shuff said.

In his concession speech, Gray praised the work he and his staff have done over his 3 1/4 years as mayor, a period viewed as a continuation of the robust — albeit uneven — economic progress the District has seen over the past decade. In an attempt to fulfill his promise to bring more jobs, housing and shopping into struggling areas of D.C., Gray successfully pushed Wal-Mart to agree to open a fifth store in southeast D.C. in Skyland Shopping Center. Additionally, Gray actively encouraged real estate deals and promotions involving technology, higher education and healthcare in more underdeveloped areas of the District.

“I think the work that we have done over the last 3 1/4 years has been nothing short of phenomenal,” Gray told a small crowd of loyal supporters during his concession speech Tuesday evening.

However, new construction has come with high price tags, including an $8.3 million food pavilion on the grounds of the former St. Elizabeth’s hospital in southeast D.C. The pavilion, designed for the nearly 4,000 U.S. Coast Guard employees who work across the street, has ended up going $3 million over its original budget.

For Gray’s supporters, the disappointment was palpable. Much of his campaign was run under a cloud of suspicion stemming from the federal investigation in his 2010 campaign, in which he allegedly received illegal campaign contributions in order to fund a “shadow campaign” to smear his opponents, including then-Mayor Adrian Fenty, whom Gray eventually defeated.

While Gray was able to hold a steady lead in the polls, his campaign was dealt a heavy blow March 10 when Ronald Machen, the U.S. attorney investigating Gray’s 2010 campaign, held a press conference announcing the guilty plea of Jeffrey Thompson, the man who claims he met with Gray prior to the race and agreed to funnel money illegally into his campaign.

One of Gray’s most prominent supporters, Councilmember and former Mayor Marion Barry (D-Ward 8), summed up what seems to be the sentiment among many of Gray’s supporters.

“Ron Machen decided this election,” Barry tweeted on Election Day as it became clear that Gray would not be re-elected.

What follows is yet another period of uncertainty, as Gray finishes out the last nine months of his term still facing the possibility of a federal indictment. If indicted, Gray has made it clear he will fight all charges against him to clear his name of any wrongdoing.

“I will see this through,” Gray said in one of the campaign’s most heated debates Feb. 26.

For Bowser, who fought criticism that she was inexperienced and lacked the knowledge to manage a city of D.C.’s size throughout the race, the next seven months will likely be spent shoring up Democratic support for the November general election against longtime Councilman David Catania (I-At Large) (SFS’ 90, LAW ’94).

Based on the District’s electoral history, Catania, a white, gay ex-Republican would normally be considered at least a long shot, but with four citywide electoral victories under his belt, Catania has demonstrated that he is not a candidate to be taken lightly.

But Catania, a member of the D.C. Council since 1997, has a long way to go before he has any chance of besting Bowser, who will likely have the full resources of the Democratic Party in the District behind her. Recent polls by The Washington Post have Bowser up by more than 30 points in a head-to-head matchup against Catania.

“We are a huge voting block, and with the possibility of same-day registration, there is no reason why students shouldn’t be targeted by campaign efforts. To my knowledge, very few students voted. I don’t think many students even knew there was an election going on,” Hinerfeld said. “Come November, it will be important to try to gauge student interest with the election as these policies will directly affect us.”

GUSA President Trevor Tezel (SFS ’15), a former president of the College Democrats, hoped that Bowser would engage with the university if elected the District’s next mayor.

“While Muriel Bowser has not returned repeated requests to speak at Georgetown University, we hope that, if elected, her term as mayor brings a new attitude toward student engagement in District politics,” Tezel said.