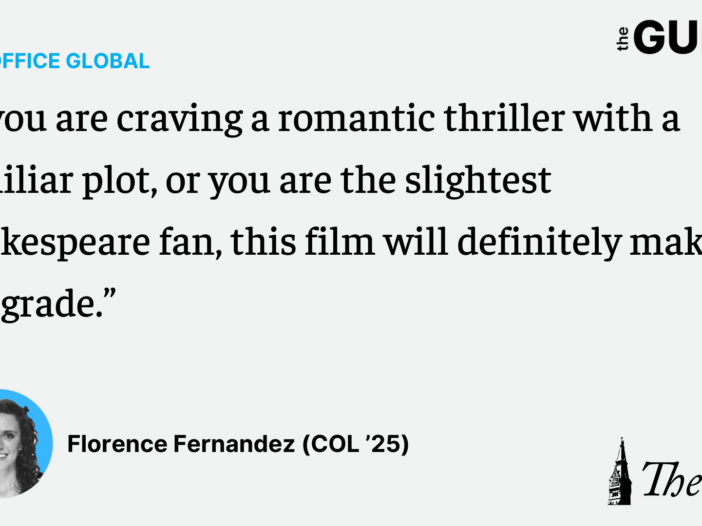 Shakespeare walked so that Oliver Parker could run.

Director Oliver Parker’s 1995 version of the Shakespearean tragedy “Othello” is, at times, almost too hot to handle. If you are craving a romantic thriller with a familiar plot, or you are the slightest Shakespeare fan, this film will definitely make the grade.

Starring Laurence Fishburne as the eponymous Othello, the film adapts the legendary story from stage to the screen. Following the same plot of the play, Iago (Kenneth Branagh) manipulates the Venetian general Othello into thinking that his wife Desdemona (Irène Jacob) is having an affair. Never confronting his wife, Othello endures a torturous buildup of insecurity and jealousy, as Desdemona becomes increasingly scared of his brusque attitude and actions towards her.

Unlike the middle-aged and nobly upstanding character of Othello as written by William Shakespeare, Fishburne’s version of the hero is emotionally volatile and “exudes a hearty sexual swagger” unlike any Shakespearen character I have encountered. Most filmed portrayals of Othello adhere to what Shakespeare had in mind by highlighting his respectability and maturity. Fishburne’s younger, more explosive and distressingly handsome Othello creates a truly emotionally charged cinematic experience that previous Othello films have lacked. Parker deviates from the literature but sets his film apart as one that appeals to younger audiences.

Set in ancient Venice, Parker uses the city’s shadowy canals and mysterious atmosphere to build towards the film’s tragic unraveling. The soundtrack complements the sensational mood of the film, as every major scene is underscored by a dramatic musical piece. These pairings are characteristic of Parker’s work, and it moved me to tears several times.

Parker also succeeds with building emotional tension throughout the film. Whereas stage interpretations were confined to a single perspective, the film cleverly employs camera techniques to heighten our awareness of Othello’s hotheadedness. Parker uses point of view shots to show Othello’s visual perspective as he jealously watches Desmona interact with other men. We witness Othello’s vivid flashbacks to moments of passion with his wife, and his jealousy grows more potent.

Arguably the most heart-wrenching feature of the plot is Othello’s breakdown of composure, as his sanity flies out of the window, and all he can think about is Desdemona. He sits doubled over on his velvet recliner, gutturally sobbing over her. His youth, and the fact that he is a victim of Iago’s devious influence, garners the audience’s sympathy more so than in the more traditional adaptations where Othello is older and less passionate. Parker even uses hyperbolic imagery to represent Othello’s distress. Othello sits himself down in a dungeon cell to ponder his wife’s disloyalty. Imprisoned by Iago’s twisted manipulation, Othello cries so hard that he undergoes a full body seizure. This scene is not for the fainthearted, but it is an excellent visual of the pain caused by being betrayed by someone you love.

The emotional intensity of the film culminates in Act 5, Scene 2 where — spoiler alert — Othello murders Desdemona for her alleged adultery. Her resistance is tragically weak and muffled as Othello smothers her in her bed, while he cries in a “frightening parody of sexual consummation,” as noted by Samuel Crowl in his book “Shakespeare and Film”.

Before Othello kills her, he extinguishes her candles — a call back to their wedding night when Othello carried Desdemona to bed, and they extinguished every candle together, giggling. The cinematic allusion to their marriage night starkly showcases Othello’s loss, causing us to not only mourn Desdemona, but Othello’s sanity as he kills her. He intimately embraces his wife until her very last breath. These visuals are an echo of their once shared intimacy, which furthers the devastation in this scene.

Othello is soon struck by grief when he discovers that his wife did not engage in adultery — Iago’s wife realizes that her husband manipulated Othello. He killed his innocent and adoring bride, destroying his virtuous reputation and breaking his own heart in the process. Then, violence ensues.

Iago’s wife realizes that her husband was the villain all along, and as she tries to reveal the truth to Othello, Iago mercilessly stabs her. Her body falls next to Desdemona’s, and Othello then kills Iago after discovering his deception before stabbing himself. All four bodies lie in a heap on the blood-soaked bed sheets. I personally found this pile of bodies to be slightly excessive, but it was a powerful display of Iago’s villainy.

All in all, Parker handles the original play very carefully. Unless you’re a purist, Othello’s youth and looks only complement the story. However, I would recommend letting go of your English literature class understanding of “Othello” before you watch this gripping masterpiece.

Florence Fernandez is a first-year in the College. Box Office Global appears in print and online every other week.