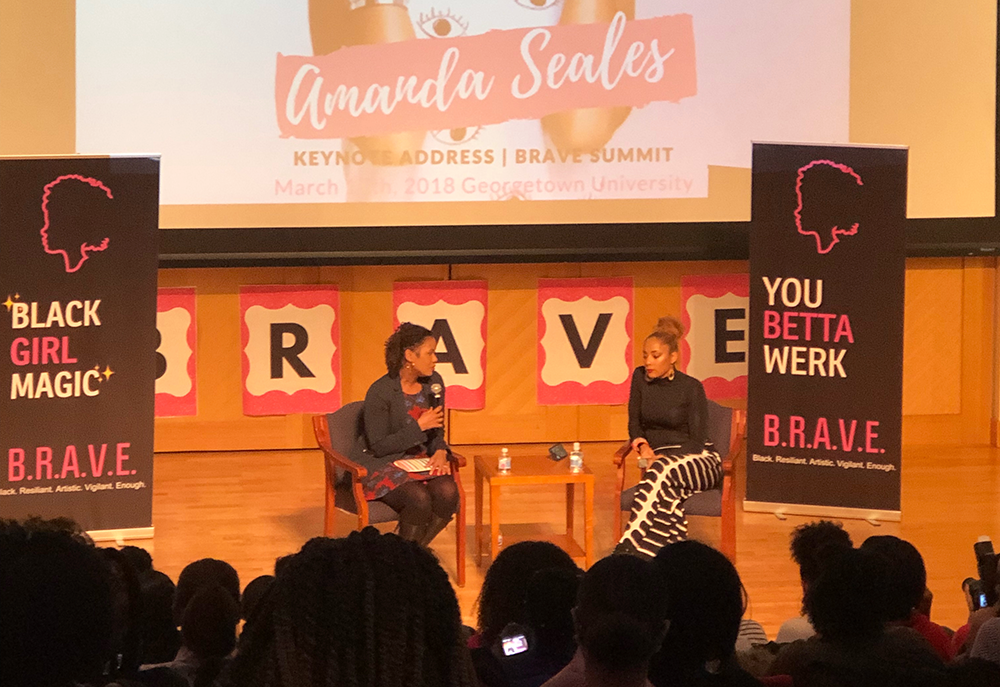 This weekend’s annual BRAVE Summit, aimed at creating a space to empower black women, brought three dozen speakers to campus to discuss the intersection of activism and the arts.

This year’s theme, “artistically, authentically, unapologetically black,” sought to empower black women to follow the career path of their dreams, whether it be a creative or corporate path.

The BRAVE Summit, now in its third year, was established to create a platform for black women to discuss their experiences, as they are often excluded from the conversation, said Kay Threatt (SFS ’18), one of the event’s organizers. The summit’s name stands for “black, resilient, artistic, vigilant, enough.”

Organizing for the first summit three years ago started “in the living room of the Black House” at the height of the #SayHerName movement, which sought to raise awareness for black and female victims of police brutality in the aftermath of Sandra Bland’s death in police custody, according to Threatt.

“It was in the height of the #SayHerName movement, where a lot of black women were being killed and left out of the greater dialogue around black men being killed.”

In addition to Threatt, Ndeye Ndiaye (COL ’18), Kayla Harris (MSB ’18) and Juliette Browne (COL ’18) organized this year’s summit. They delivered the opening address of the summit in unison, explaining the three facets of this year’s theme: “artistically,” “authentically” and “unapologetically” black.

“Artistically, as the rhythm in the way we walk, poetry in the way we talk and art in the way we carry ourselves in a country that constantly tries to bury us,” Ndiaye and Harris said about the first element of this year’s theme.

“Authentically” and “unapologetically” are the other facets of this year’s theme.

The BRAVE Summit has brought a new perspective to the Georgetown community through the art of language, DeGioia said in his opening remarks.

“The act of bringing an imagined reality into being, of moving from a vision to an accomplishment, is a remarkable and bold act,” DeGioia said. “This is what is our BRAVE Summit founders and organizers have done. Today, as you each share your experiences, your stories, your insights, you enable us to understand all that is possible in each of our own lives, and guide us to envision our future in a new way.”

The conference’s eight breakout sessions focused on a variety of topics about building one’s own brand in the workplace, as well as activism’s role within education, media and religion.

One of the event’s mainstage panels, “What’s Joy Got To Do With It: Discussing Black Girl Joy,” centered on the challenge of achieving self-love and joy within the black community. Erika Totten, founder of Unchained, a company focusing on the emotional emancipation of the black community, discussed the need for black women to empower themselves, both in and out of the workplace.

“I don’t believe in conformity or assimilation, however, I do understand that many of us and many of the women who have come before us did that to make it easier for us,” Totten said.

The afternoon mainstage panel, “Power Players” discussed the difficulties women of color face within the workplace, such as navigating the corporate world while maintaining personal values.

Ericka Pittman, the chief marketing officer of the beverage company AQUAhydrate, said people must put themselves in uncomfortable situations to be successful in business.

“The most pivotal or defining moments are when you’re uncomfortable, because you’re learning rather than sticking with the status quo,” Pittman said.

Seales highlighted her experiences as a woman of color within the entertainment industry during her keynote address in Lohrfink, “The Women Who Raised Us.”

Through her podcast “Small Doses,” her role on “Insecure” and as a comedian, Seales has sought to maintain her authenticity by blending together the worlds of academia and comedy, dispelling the stereotype that a black comedian cannot also be taken seriously.

Within her own work, Seales has chosen to not bring her live comedy show, “Smart, Funny and Black” to TV networks in fear that her pure vision will be distorted.

“Black culture, black artistry has been commodified and consumed in so many different ways and so many different facets, and I’m very protective of that,” Seales said. “Especially with a product that is 100 percent innately black, you don’t want to give that to someone who doesn’t want to see that thrive.”

With those choices come hardships, however, and the need to prioritize one’s values and passions along the way. Seales emphasized the need to stay true to oneself, regardless of the initial discomfort and struggle throughout the process.

“All of us are trying to exist in a comfortable space in a world that’s uncomfortable,” Seales said. “A job gets you a check, a career gets you a lifestyle.”