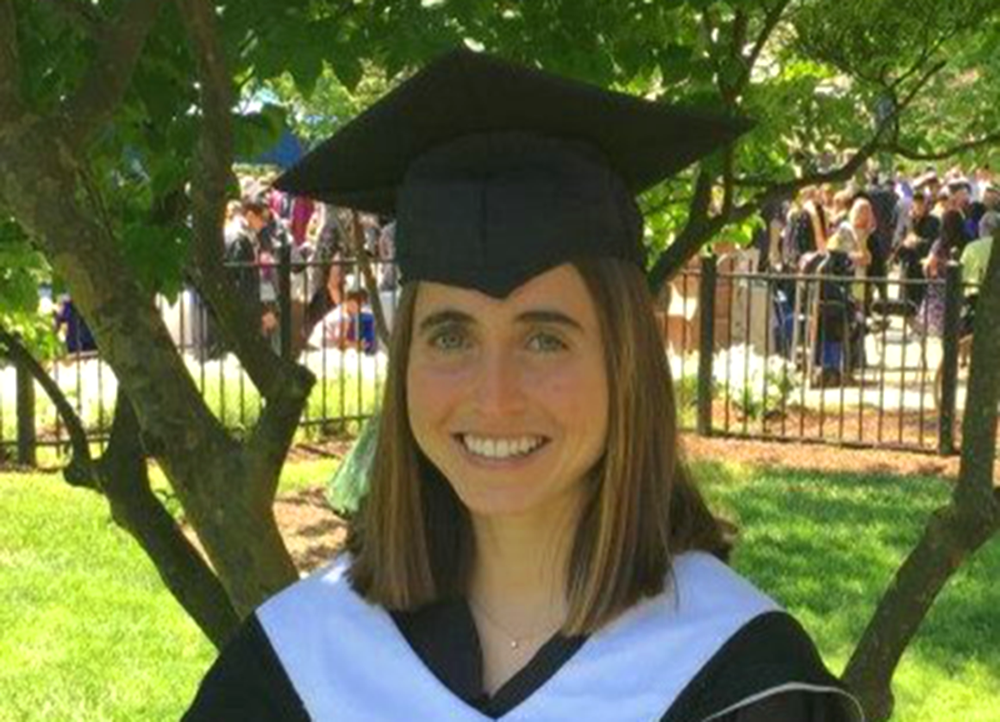 By all accounts, Nina Brekelmans (GRD ’15) was a brilliant student, an exceedingly proficient Arabic and Spanish speaker and an avid long-distance runner. She graduated with a near-perfect GPA in Georgetown’s Master of Arts in Arab Studies program and planned to study the experiences of female runners in Jordan with a Fulbright grant this fall.

On June 3, Brekelmans, 25, died in an electrical fire in a townhouse on Riggs Place NW near Dupont Circle. The 2:30 a.m. blaze killed one other resident and injured three firefighters.

Brekelmans will be remembered in the academic communities of both Dartmouth and Georgetown as a passionate and endlessly talented student. Many professors noted that she exuded a quiet confidence in the classroom.

Dartmouth Arabic professor Mostafa Ouajjani said Brekelmans was one of the hardest workers he has ever taught.

“Nina has always impressed her classmates and me by her sense of perfection, her meticulous work and her total engagement,” Ouajjani wrote in an email. “As I think of this amazing student, I can recall a passionate and smart learner.”

Ouajjani kept in contact with Brekelmans after her graduation. Shortly before her death, she sent him a piece of her own work in Arabic — a fictional short story called “The Mother.”

“This text shows that Nina controls the most complex Arabic structures and feels at home using idioms and understanding cultural nuances of Arabic,” Oujjani wrote. “Indeed, anyone who reads this text would feel that it must have been written by an Arab writer. I intend to use her text in my course on the Arabic short story this fall in honor to her heritage and in remembrance of such an amazing soul.”

Brekelmans developed an interest in writing and translating Arabic fiction at Georgetown, where she audited “Introduction to Fiction Writing” with Professor David Ebenbach.

“She was kind of amazing,” Ebenbach said. “She was a very talented writer, first of all, but I think, most impressively, she was a very generous presence in the class. She gave a lot more than she took. She was really helpful with her peers, giving them feedback on their work, and she was auditing, so she could have phoned it in, but she gave a lot of herself.”

“She was pretty quiet but very focused,” Adely said. “I have this vivid memory of her in this one class where we had these really passionate and loud students who were debating. It was a small class, and there was a debate going back and forth for 30 minutes between three or four students. At the end she said, ‘Just let me make sure I understand.’ And she summarized the points everyone just made. She was always engaged and participating and absorbing what was going on.”

Brekelmans’ interest in Arabic expanded beyond the classroom, as well, with her internship at the Muslim Chaplaincy. Through the position, she connected with Muslim students and community leaders and organized programming and outreach for the chaplaincy.

“She wanted to practice her Arabic, and she was really determined to study Arabic, to engage in the Arab world and engage in Arabic art and the Arab culture,” Director of Muslim Chaplaincy Imam Yahya Hendi said.

Hendi said that he and Brekelmans connected over their desire to “give a voice to women, a voice to those who are forgotten.”

“Nina was spiritual, a special kind of spirituality. She was connected with her soul, with her mind, with her heart,” Hendi said. “In her, I saw the true vision that God has for the world.”

Brekelmans’ second passion in life was running. She walked on to the Dartmouth Division I cross-country and track teams her freshman year and trained hard to keep up with her recruited teammates. Over time, she began to break her own personal records, notching a 5:12 in the mile and 17:57 in the 5K .

“She was a really hard, hard worker. One of the hardest workers on the team,” former Dartmouth Distance Coach Marc Coogan said. “We even acknowledged that as a team at the track and cross-country banquet at the end of the season. She wasn’t the fastest girl on the team, but definitely one of the hardest-working.”

At Georgetown, Brekelmans joined the Georgetown Running Club and became a volunteer for Girls on the Run, a non-profit that encourages young girls to develop a passion for fitness.

“Nina was very, very proud to be part of GRC,” GRC Coach Jerry Alexander wrote on the club’s blog. “She was willing to do whatever it was going to take to hang with the girls, and she was a great teammate in every sense of the word.”

Brekelmans managed to mix both of her passions, Arabic and running, during her gap year in Amman, Jordan. She spent one year there in 2013 through the Center for Arabic Study Abroad and immediately involved herself in the community, running daily at Sports City in Amman. There, she connected with runners with the organization Run Jordan, a non-governmental organization that coordinates races throughout the country. She won her first half-marathon in Jordan on her first-ever attempt at the 13.1-mile race.

Brekelmans made friends with many female distance runners, with whom she trained daily at 4:30 a.m. to avoid the blistering Jordanian summer heat.

“She worked mainly on empowering local women to participate in sports, especially running,” Run Jordan member Lina Al-Kurd wrote in an email. “She tried to help them overcome societal stigma and participate in any sport within the Kingdom. …We lost a great runner and volunteer who had an amazing spirit.”

Brekelmans’ penchant for Arabic was not only helpful in an academic setting, but also in a social one. She had a remarkable ability to make close friends in Arabic, as evidenced by her strong network of runners, coaches and volunteers in Amman.

“We first met Nina here, at Sports City, and we would run together almost daily,” Sharifa and Ashwaq, two female runners, wrote in an email. “Talking about Nina, she brought us together with her persistent, kind spirit that represents a true sportswoman. The smile would never leave her face, no matter her score or run time. As a human being, she is irreplaceable and our loss is great.”

According to her teammates, Brekelmans was a motivating and encouraging force. Many teammates shared their experiences with Brekelmans in a memorial video, and Run Jordan hosted a memorial run in her honor in June.

“We saw Nina at practice almost every day. No one will forget her. Her soul and her spirit is with us and it encourages us,” an unnamed teammate said in the video. “She would always come up to me and encourage me and say, ‘You can, you can.’ I will never forget her telling me that. Whenever I find something to be difficult, I will always remember what Nina told me.”

Brekelmans involved herself in many aspects of Jordanian life besides running. She volunteered at Reclaim Childhood, a non-profit in Amman that teaches sports to refugee children, and aimed to explore historical and cultural sites outside of the city in her free time.

“The will that she had, the strong will led her to really reach out in Jordan,” Hendi said. “She went to the market, she spoke to people on the street, she went to peoples’ homes. She challenged the unchallenged. She challenged her own fears of the unknown.”

Many of Brekelmans’ Jordanian friends did not speak English at all, which Center for Contemporary Arab Studies Program Manager Julie Yelle (SFS ’08) said showcases a truly special talent. Yelle met Brekelmans at Middlebury College during a summer language immersion program.

“One of the things that struck me was what an amazing ability she had to build relationships and nurture friendships in Arabic,” Yelle said. “When I got to know her, we spoke the whole time in Arabic, and I really enjoyed getting to know her that summer. Now, when I’m thinking about how deeply I feel her loss, it’s incredible to think that 99 percent of my interaction with her was in Arabic.”

Hendi said Brekelmans will be remembered in America and in Jordan as a bright force for positivity and change.

“She meant the word ‘inspiration.’ She really inspired so many people she came across without any doubt,” Hendi said. “She meant simplicity. She would sit on the floor and wouldn’t care, would eat anything. And smile, oh my God, smile. Even if she was in pain or torn into pieces inside, she managed to smile.”