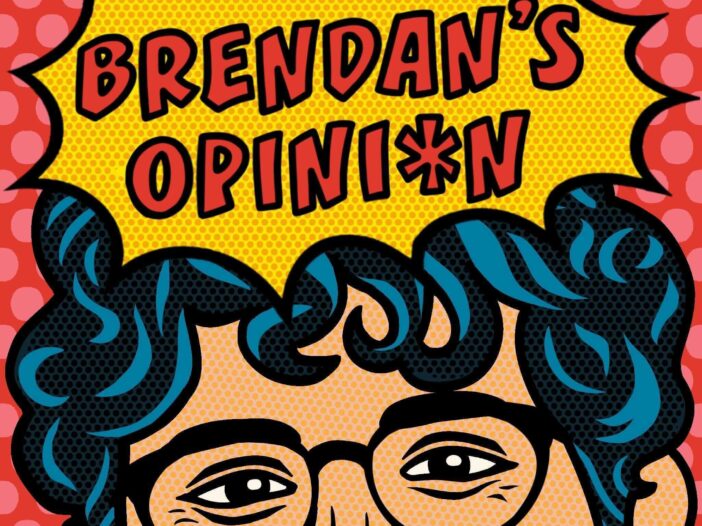 On the second episode of “Brendan’s Opinion,” host Brendan Teehan (CAS ’25) discusses what he thinks is “in” and “out” at Georgetown. Topics of discussion include obscure HALC classes, wearing winter clothing and remembering the Madeleine Albright memorial bench.

Edited by David Yang and produced by Amna Shamim. Image by Jasmine Criqui.

Brendan Teehan (BT): Hi, my name is Brendan, and contrary to popular belief, I’m not stealing people’s Hydroflasks from the Leo’s lost and found — at least, not anymore. This is Brendan’s Opinion.

BT: Hello, everyone, welcome back readers, and welcome to a new semester at Georgetown. We made it through 2022. It had its highs and its deeply depressing lows. But we came out of the other end, and I think we need to address the elephant in the room. It is 2023, the Year of the Rabbit? Yeah, it’s the Year of the Rabbit, and I think the campus is suffering from an attitude of “New Year, New Me.” And with that comes both resolutions like “Don’t take other people’s water bottles,” and trend forecasts. And because not only am I a hard hitting investigative journalist and a social scientist, I, like my fellow Californian and resident baddie Joan Didion, am a cultural theorist. This means that I have my finger on the pulse for what’s in store for the new year at Georgetown.

So I decided I’d make an episode about it. This was also heavily inspired by a recent trend on Twitter.com where, everywhere you go, another micro-influencer has declared what’s in and, more importantly, what’s out. And just like the Twitter mobs, I decided I wasn’t going to be pulling any punches. So let’s get into it: what’s in at Georgetown, and what is out.

Coming in at number one, IN: taking the most obscure HALC class you can find. So as the resident HALC Fellow on The Hoya, I know firsthand the variety of classes you can take to get that art credit out of the way. And I’ve definitely encountered a couple of them that raised some eyebrows.

I don’t want to get into specifics, but a friend of mine last semester took “Art of the Black Atlantic,” and she didn’t really know what she was getting into, because she showed up and in her words, “Everyone else was wearing a scarf indoors,” but she wasn’t, and she ended up writing a 20 page paper for her final about quilting. So if that interests you, go for it.

My roommate also took a very interesting HALC class his first year at Georgetown, where he had to go take pictures of deer for two hours. And he came back with a sign that said “Deer hunting in our area.” So if you’re looking for some room decor, maybe that one’s for you. But whatever your HALC class decides to be, go ahead, take watercoloring, take “Ways of Knowing,” take “Sensual Poetry of the 18th Century.” I support your academic journey.

Coming in at number one for OUT: the ping pong table in the HFSC. Now, I don’t mind it being there. I’m not upset at its presence, but I am upset when people use it.

People are trying to study. They wanted to go to the HFSC because they felt like they were going to be productive, and all you hear is like a *clicking noise*.

How are we supposed to work in these conditions? It’s unacceptable, and I think the people that play ping pong in the middle of the day, a) they know what they’re doing, b) how dare you and c) if you need to occupy your time, go play tennis. It’s like ping pong, but real, you know.

Making a grand entrance at number two for IN: wearing the largest puffer you own. As all of you may have noticed, it’s become overwhelmingly cold at Georgetown. And it may just be the Californian in me, but it makes my blood boil when I see someone who’s wearing, like, a single knit sweater and a pair of slacks, and they’re acting like they’re not cold. But I know they’re doing it for attention. I can’t prove it, but I just feel it.

Like since when did being cold become embarrassing? I’m ready to own it. Like, yeah, I may have bad circulation in my fingers. Does that make me any worse of a Georgetown student? No, it does not. So I’m empowering all of you. Don’t tough it out. Make people impressed with how cold you seem. And why stop at a coat? Why not get some earmuffs? Why not get a hand-muff? Why not invest in those pouches that skiers put in their shoes so their feet don’t get hypothermia? It is your God-given right to be cold. Exercise it.

And coming in at number two for OUT: the MyAccess revamp. I’ve talked to so many people about it, but I don’t think I’ve expressed my frustration in a way that has satisfied my anger yet. And to be fair, I am not a graphic designer, so it’s out of my range of expertise. But I’m telling you, that cannot be how the website is supposed to look. And it can’t be how that website is supposed to work either.

Like, are you really telling me that just to see my transcript, I have to type in MyAccess to Google; I have to type in two factor authentication every time because it logs you out after five minutes; I have to go to the transcript heading in MyAccess; I have to go to a second website, create a second account; and then wait two to five business days for someone to deliver my transcripts to me? At that point, it’s not even worth it anymore. MyAccess, you were so good while you lasted, but you’re in your flop era right now. And I don’t really appreciate it.

But moving on to number three for IN: spitting into a vending machine. Now as we all know, at Georgetown, we protect ourselves from COVID in a myriad of ways, some of them conventional, some of them novel, but I don’t think I’ve ever seen anything like this in the wild. If you have seen these vending machines in Leavey, in the ICC, please let me know that I’m not crazy. Because apparently what you need to do is spit into a vial, put it in this machine, someone comes and picks up this entire collection of different spits and then they run it under some tests to make sure that you don’t have COVID. And even if it were Ranit Mishori, Dr. Ranit Mishori, excuse me, herself was looking at my spit, I don’t know if I feel comfortable letting it, like, ferment in a metal box for a couple of hours. It’s not kombucha, it’s spit. Next. But, that being said, everyone get tested regularly. I really want to delete Zoom from my computer.

Okay. And for our final OUT of the episode: it pains me to say that we are saying our final farewell to the Madeleine Albright mourning bench. And I know everyone who’s listening knows what I’m talking about. If you’ve ever walked into the lobby of the ICC within the past six months, there was a printed out photo of Madeleine Albright’s headshot in like a frame that someone got at a Joann Fabrics. And it’s just sitting on a bench by the elevators, with a stack of pale yellow Post-It notes that I guess people are supposed to write messages to Madeleine Albright’s ghost. I don’t know how it was supposed to work. But if I can give out an award to the most nonchalant memorial that I’ve ever seen, I think it’d go to that one. And I guess an additional IN is being able to sit on that bench again. Thanks, Maddie, miss you.

So I wanted to end our episode with a couple rapid-fire ins and outs just to make sure all of the loose ends get tied up. So here we go:

IN: Michelle Yeoh, OUT: the pianist at the Golden Globes, that was rude.

IN: exploding pipes, OUT: Gaston Hall.

IN: activating your SmarTrip awards. Because you know what, you deserve that $100.

OUT: paying for your laundry apparently, IN: ching ching cha.

The Free Food GroupMe: OUT, if I can figure out how to leave.

And finally, The Hoya Multimedia section: IN; check us out at CAB fair.

So now that we’re all up to date, I can’t wait to see what the semester has in store. And remember, I don’t control the future, I just know it. So if I knocked your favorite trend, just know that I support you, but enjoy it while it lasts. For The Hoya Multimedia, I’ve been Brendan Teehan, and I’ll see you for another episode of Brendan’s Opinion.

BT: This podcast was hosted by Brendan Teehan, who is me, and it was edited by David Yang and produced by Amna Shamim. Thank you so much to The Hoya for giving me this platform to spread my Associated Press-level, scholarly-source-using, JSTOR-oriented media. And I hope you enjoyed it.