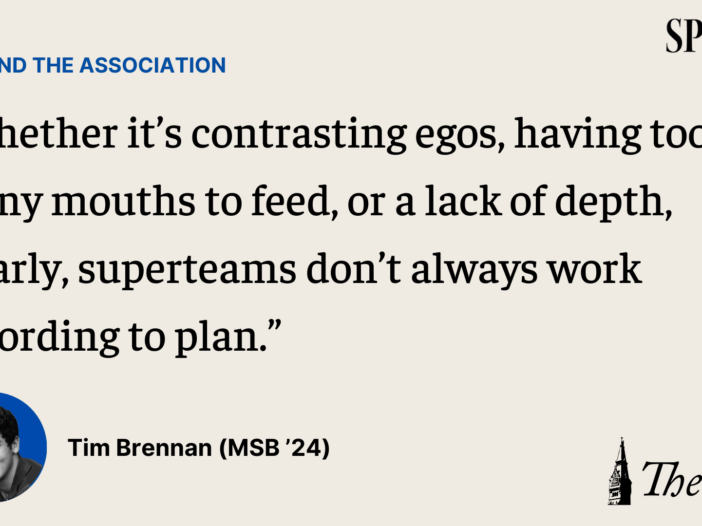 In 2007, the Boston Celtics traded for Ray Allen and Kevin Garnett, teaming them up with incumbent All-Star Paul Pierce to form the famed Big 3. Boston sacrificed most of their depth and a host of draft picks to load up on star talent.

But the gamble paid off. Boston won the National Basketball Association (NBA) Finals that season, and fell just one game short of another championship title two years later.

In 2010, the same year the Celtics fell short, LeBron James made The Decision, teaming up with superstar Dwyane Wade and All-Star Chris Bosh on the Miami Heat. Miami then marched to four subsequent NBA Finals and won two of them.

These trios ushered in the “superteam” era. Rather than creating deep rosters, franchises prioritized forming a “Big 3” of stars and supporting them with a motley crew of youngsters and ring-chasing veterans. But not everyone was as successful as Miami or Boston.

In 2012, the Los Angeles Lakers brought together Steve Nash, Dwight Howard, Pau Gasol and Kobe Bryant, but the experiment failed horribly due to egos and injuries. Similarly, in 2013, the Nets traded for Boston’s aging stars Pierce and Garnett to pair with All-Stars Deron Williams and Brook Lopez, but the team won only a single playoff series and set the franchise back almost a decade. In 2017, the Oklahoma City Thunder traded for Carmelo Anthony to pair him with Russell Westbrook, but they never won a playoff series with the roster and ultimately traded Paul George and Westbrook two seasons later.

Whether it’s contrasting egos, having too many mouths to feed, or a lack of depth, clearly, superteams don’t always work according to plan.

But despite the multitude of team successes and failures, the best way to track the rise and fall of the NBA superteam is through a single player: Kevin Durant.

In the 2016 Western Conference Finals, the Golden State Warriors defeated the Thunder, who were led by Durant. Just months later during the offseason, Durant shocked the world by leaving the Thunder for none other than the Warriors. Durant joined Stephen Curry, Klay Thompson and Draymond Green to form one of the most iconic NBA superteams. Golden State cruised to championship wins in 2017 and 2018 before losing in the 2019 finals.

After NBA fans lambasted Durant for three seasons for taking the easiest possible road by going to Golden State, though, Durant formed his own superteam consisting of Kyrie Irving and James Harden on the Brooklyn Nets. The Nets immediately became the overwhelming favorites to win the championship in 2021, but after injuries to Irving and Harden, they lost to the Milwaukee Bucks in the second round.

Naturally, pundits pegged the Nets as title favorites in 2022, but once again, that didn’t pan out. Irving refused to get the COVID-19 vaccine, which prevented him from playing home games, Durant suffered an injury with a lengthy recovery timeline and as a result, Harden demanded a trade during the season.

Following that chaos, the Nets could not defeat the Boston Celtics in the first round of the playoffs, even with a healthy Irving and Durant, making them the only team to be swept in the 2022 playoffs.

Since then, things have been predictably bumpy in Brooklyn. On July 1, after Irving nearly took a $30 million pay cut to play with the Lakers, Durant requested a trade. Once Durant is gone, most pundits assume Irving will be gone, too. As quickly as it began, the Nets’ superteam is ending.

With this catastrophic failure, it is time to declare the NBA’s superteam era over. While the Los Angeles Clippers — the last modern superteam — could still pull off a championship run, the teams with the best odds to win the 2023 championship, namely the Warriors, Celtics, Suns and Bucks, almost exclusively feature homegrown rosters. Even the Heat and Philadelphia 76ers rely primarily on their own talent to support one star player.

It’s easy to see that roster depth and flexibility is all the more important in today’s NBA from looking at the 2022 conference championship teams. Each team has two stars in their prime, but the Warriors, Mavericks, Heat and Celtics all were successful due to their glut of talented role players.

While there will always be franchises trying to create superteams, it’s clear the NBA is headed in a different direction. Stars will always drive the league, but the days of focusing solely on three stars seem to be behind us.

Tim Brennan is a rising junior in the McDonough School of Business. Around the Association appears online every other week.