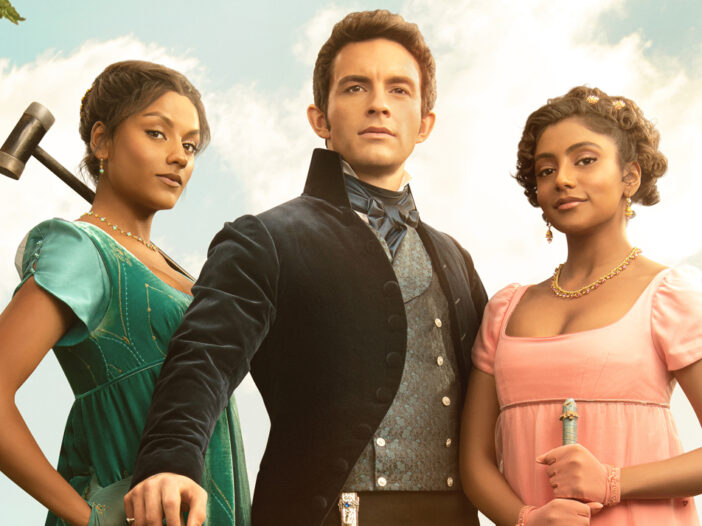 Dearest gentle reader, hold on to your bonnets — because the enchanting costumery and sizzling sexual tension of the second season of “Bridgerton” will knock your stockings clean off.

Though far from perfect, the return of “Bridgerton,” the Netflix series based on Julia Quinn’s best-selling novels, will undoubtedly have you glued to your Netflix account for its masterful use of tropes in its love story or its wildly frivolous happenings.

After the rousing premiere of “Bridgerton” on Christmas Day 2020 and the happy conclusion to Daphne (Phoebe Dynevor) and Simon’s (Regé-Jean Page) love story, millions of wannabe lords and ladies have been waiting with bated breath for the next installment.

The second season stars Jonathan Bailey as Anthony, the Bridgerton family’s de facto patriarch. A gruff and brooding leading man, he has been managing his family’s finances and social standing since his father’s death years ago. In the second season, he finds himself in need of a viscountess.

Hot-headed Anthony eventually meets his match in Miss Kate Sharma (Simone Ashley), the eldest daughter of a family that has recently arrived in London from India. However, it is not Miss Sharma on whom Anthony initially sets his sights but her charming younger half-sister, Edwina (Charithra Chandran).

The season follows many conventions set up by preceding period dramas and romance stories, namely by positioning Anthony and Kate in a diametrically opposed, enemies-to-lovers situation rife with sharp dialogue and sexual tension.

The best parts of “Bridgerton” happen when Anthony and Kate take center stage, fighting a battle of wills, as well as their own internal battles between love, obligation and societal expectation.

Not every bit of dialogue in the show lands well, but the viscount’s candlelit, midnight-in-the-library declaration to Kate — that she is “the bane of [his] existence and the object of all [his] desires” — makes every second worth it.

While there are some bouts of analysis of the injustices and oppression faced by characters of color, “Bridgerton” sticks to what it knows best: delivering a soapy story that, although sprinkled with serious discussions, mainly shows two beautiful people falling in love.

Where “Bridgerton” fails in delivering innovative, creative television, it succeeds in giving audiences something pretty and even camp. In addition to the impossibly beautiful cast, the fantastical, flower-decked ballroom sets and empire-waist gowns of every hue make each frame of the show reminiscent of a Fragonard painting.

However, a lot of care is given to the leads’ costumes and fleshed-out designs that the rest of the cast can be nearly forgotten or, unfortunately, ruined by weird writing choices.

Benedict Bridgerton (Luke Thompson)’s bohemian charm takes a turn for the arrogant as he spends his time sleeping with models at his new art academy, and Francesca Bridgerton (Ruby Stokes) completely disappears without an explanation.

Daphne is shoved into scenes to give annoying bits of unsolicited “wisdom” to Anthony and make viewers wish she, too, had left “Bridgerton” like her on-show spouse did.

Penelope (Nicola Coughlan)’s double-life as Lady Whistledown strains her personal relationships and turns her into a character that viewers now scorn rather than pity. Penelope comes across as petulant, perhaps because the show seems to have forgotten to give her a good reason as to why she’s keeping up her gossip column.

Some characters, however, are welcome additions to the people of Georgian London. Kate gracefully avoided the stereotypical, feisty attitude so often seen when writers try to make female characters “different,” instead allowing herself to embrace and love her femininity while maintaining her quiet strength.

While the second season of “Bridgerton” has moments that force you to question why you’re still watching, the otherworldly chemistry between Anthony and Kate pulls you back, cementing the show’s reputation as a solid, trustworthy watch for anyone looking for a quality love story with Jane Austen flair.