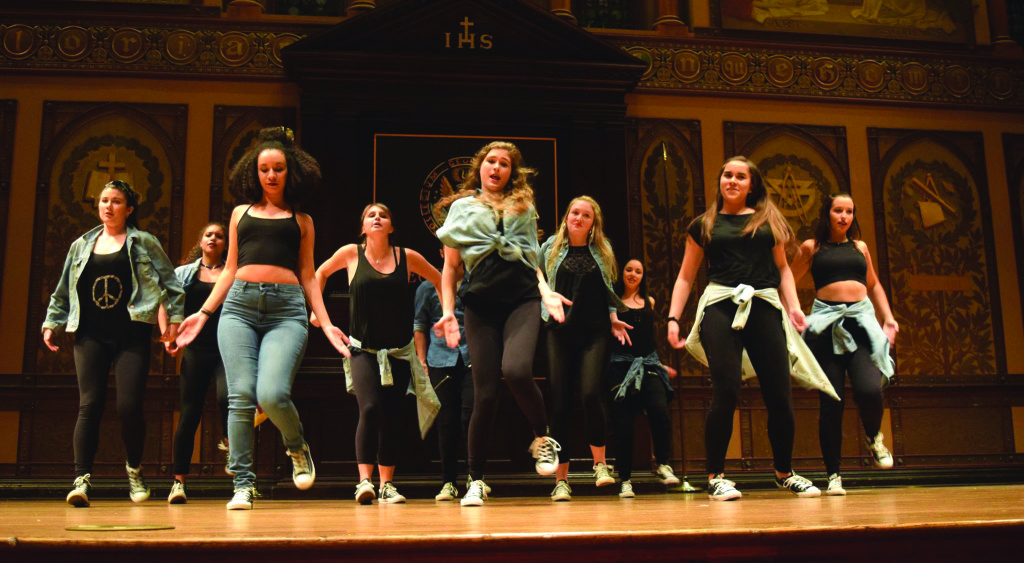 From Georgetown Dance Company, which focuses on classical ballet and jazz, and Hoya Break Squad to Black Movements Dance Theatre and Ballet Folklórico Mexicano de Georgetown, Georgetown’s slew of groups not only covers a wide spectrum of dance styles, but also encompasses a vast array of cultural traditions.

The cultural exploration of Georgetown’s dance groups is part of what makes their presence on campus so important. In addition to furthering cultural awareness, the dance groups provide Georgetown students, members and general audiences alike with an opportunity to focus their attention on a universal mode of expression.

Even Georgetown’s most competitive and demanding dance groups seem to offer their dancers a refuge from the stresses of student life and, by encouraging such a creative release of energy, provide the rest of the student body with rich, vibrant and often educational entertainment.

Many groups argue their primary role on campus is to expand cultural awareness, according to Jasmin Nava co-director of Ballet Folklórico — a group that embraces traditional folkloric dance from various Mexican states.

“[The group] brings about cultural exposure, understanding and expression and aims to foster intersectionality and inclusivity among Georgetown students,” Nava wrote in an email to The Hoya.

“Ballet Folklórico is not only an addition to the vibrant culture of art here at the Hilltop, but it is also an extravagant opportunity to share Latin heritage with the Hoya community as well as the D.C. community at large,” Co-Director Diego Tum-Monge (COL ’19) said.

The essence of the group’s mission is apparent in the history of its founding. Twenty years ago, three ambitious international students from Mexico began an extracurricular class designed to raise awareness of their culture and heritage at Georgetown. While the class eventually ended, Ballet Folklórico has carried on the young founders’ goals, by way of dance.

“BMDT’s mission is to express the African-American experience through the arts,” Davis said.

In doing so, the all-female group aims to encourage engagement in the social and political developments of the community and country at large.

In 2015, Davis choreographed a piece titled “Glory,” which was set to the song by Common and John Legend and sought to unpack the emotional consequences of police brutality. Davis said the group’s theatrical foundations are a vital tool in dealing with topics as complex as policy brutality and gender violence, as dramatic devices help translate almost ineffable topics into physical expression.

BMDT employs a yearly theme to help focus the dance company’s message and promote its reach. Newman explained that this year’s theme, “Defiance,” means defying the racial barriers, political and social trends and categories that are usually imposed onto African Americans and those subgroups that attempt to define their identities in relational terms. Davis noted that, as an arts group at Georgetown, BMDT has a responsibility to educate.

In addition to their roles as cultural educators and social justice advocates, dance groups at Georgetown also serve as outlets for their members. Aubrey Wetzelberg (SFS ’17), director of Groove Theory, described how her involvement in the group has helped reduce her stress.

She said that part of the challenge of encouraging newcomers to apply is convincing them that, despite the serious time commitment of membership, involvement in Groove Theory can ease the burden of schoolwork by serving as a channel to release built-up tensions.

While practices require a commitment of six to eight hours per week, Groove Theory members value the community and see it as a way to escape other extracurricular burdens.

She says it is a challenge to encourage newcomers to apply because they “assume they don’t have time, or think it’s too much work,” but remains firm that her time with the group has served as a “stress reliever and a break from the busy Georgetown lifestyle.”

Similarly, Yanely Perez (COL ’17), Ballet Folklórico Mexicano’s Treasurer, describes the group as “an escape from academic life as well as an opportunity to immerse oneself in a different culture.”

Perez explained that her involvement in the group has taught her how to create.

“[The group allows you to] learn in a different way than you do the classroom,” Perez said.

To this affirmation, Wetzelberg added that dance groups offer a break to both members and audiences, as they allow students to budget time to enjoy the inspiring talents of their peers.

“The group serves the community by bringing out these talents,” she said.

The strong sense of community felt within Georgetown dance groups also helps students cope with concerns of student life. Ariel Chu (COL ’18), co-captain of Hoya Break Squad, one of Georgetown’s more recent groups recognized by the Performing Arts Advisory Council, wrote in an email to The Hoya that a feeling of community keeps her group intact.

“At the end of the day, it’s more about the people than the dancing. Our club doesn’t enforce attendance so the people who show up genuinely want to be there, and they carve out [four] hours a week to show up, dance and have a good time,” Chu wrote.

Nava stressed a similar point, noting that being in the group immerses an individual in a type of culture that values family above all else and creates a profound sense of community that extends to other Georgetown dance organizations.

“Not only have I made many lifelong friends in Ballet Folklórico Mexicano during my time at Georgetown, but I have also made many great friends that are in other dance groups on campus. I think that dance groups foster a positive, encouraging community within the groups and within the Georgetown community,” Perez said.

“We never talk about schoolwork, we ask about each other’s well-being,” Perez said.

Despite the multifaceted significance of student dance groups at Georgetown, the lacking awareness of the student body is difficult to attribute to low visibility, given that many of the groups mentioned hold frequent performances and often co-sponsor events on campus with various other student organizations.

Newman reasoned that interest is difficult to garner for more niche artistic styles like jazz and contemporary. Perez expressed a similar sentiment about Ballet Folklórico.

“[We] would love to have a bigger presence on campus … we are definitely a niche interest, but when people find us their interest is peaked,”  Perez said.
Wetzelberg affirmed this idea in recognizing that Groove Theory’s adoption of more mainstream, popularized dance styles helps its impressive presence on campus.

The significant role Georgetown dance groups play on campus today makes one wonder whether their influence will continue to grow. Wetzelberg explained that the difficulty in predicting Groove Theory’s future lies in the yearly pattern of having new waves of people with varying levels of talent, notwithstanding the brightness of the group’s present level of performance.

On the other hand, Davis noted that her intimate involvement with BMDT over the last few years has made her exceedingly hopeful about the future of dance at Georgetown, after witnessing an evolution of dance groups and a movement toward increased integration.

If in Georgetown’s recent history only a few groups existed and operated with limited scopes of influence, the current dance community is set for a future of impactful excellence.