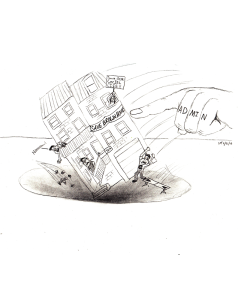 As of fall 2016, 3616 N St. NW will no longer be used for undergraduate student housing. Instead, Brown House is slated to be repurposed for Office of the Provost “strategic needs,” the purpose of which is unknown to students. Despite student activists regularly engaging with knowledgeable administrators on the future of undergraduate residential living space in biweekly meetings spanning over a year, the topic of repurposing the largest and most iconic student residence into administrative space somehow failed to arise in our extensive conversations.

It is difficult to imagine a Georgetown without Brown House. For many, ascending the home’s iconic wooden stairs and entering its vacuum-packed dance floor for the first time feels like an initiation into Georgetown — convocation, take note. Brown House feels like college, or a primordial soup. Underclassmen view it as a reliable hub in an otherwise fickle social landscape. Upperclassmen speak of it in equal parts scorn and nostalgia. At a school where one’s social life is heavily predicated upon membership in largely exclusive clubs and organizations, Brown House is the only university-owned residence that consistently offers an active and welcoming social environment. It is a defining characteristic of the undergraduate student experience at Georgetown.

And yet administrators have deemed the repurposing of Brown House an issue unworthy of student engagement. Reminiscent of the way in which the abhorrent 2010 Campus Plan was drafted without student input, administrators have once again shown themselves to be blissfully compliant in advancing the neighborhood interest of quashing off-campus life. From enforcing uniquely draconian language in the Code of Student Conduct equating off-campus noise with “disorderly conduct” to squandering hundreds of thousands of increasingly scant dollars on a bloated Office of Neighborhood Life, one needs to look no further than the streets of Georgetown on a Saturday night to see the university’s misallocation of time, money and human capital in full-flagrant force.

The only difference is that now, with the repurposing of Brown House, there is little left to take. Brown House has no equal. It has no alternative.

As we move closer to another campus plan, I am deeply concerned that the administration is not committed to providing students with quality housing and a livable campus. The implementation of a third-year housing requirement is proof that Georgetown does not offer a desirable living environment, as the administration had to force unwilling students to live on campus in second-rate spaces rather than offering attractive and affordable residences. Henle is crumbling, Kehoe Field is closed and reinvestment in existing infrastructure is severely underfunded.

By transferring Brown House to the Office of the Provost, Georgetown has taken another step back in providing students with desirable residential space and an accommodating campus. The repurposing of Brown House both diminishes the aggregate quality of university-owned student housing properties and seriously wounds social life off campus.

Georgetown’s student body is active and intelligent. There is no excuse for a decision as consequential as repurposing Brown House to be made without consulting students.

At best, the decision to convert Brown House reveals a deep ignorance among administrators of what social life at Georgetown entails. At worst, it reveals a disregard for the opinions and values of students. If repurposing Brown House is the administration’s idea of improving the state of undergraduate residential space, I fear the regression it will champion next; that is, of course, if there is anything left to regress.

Connor Rohan is a senior in the College.