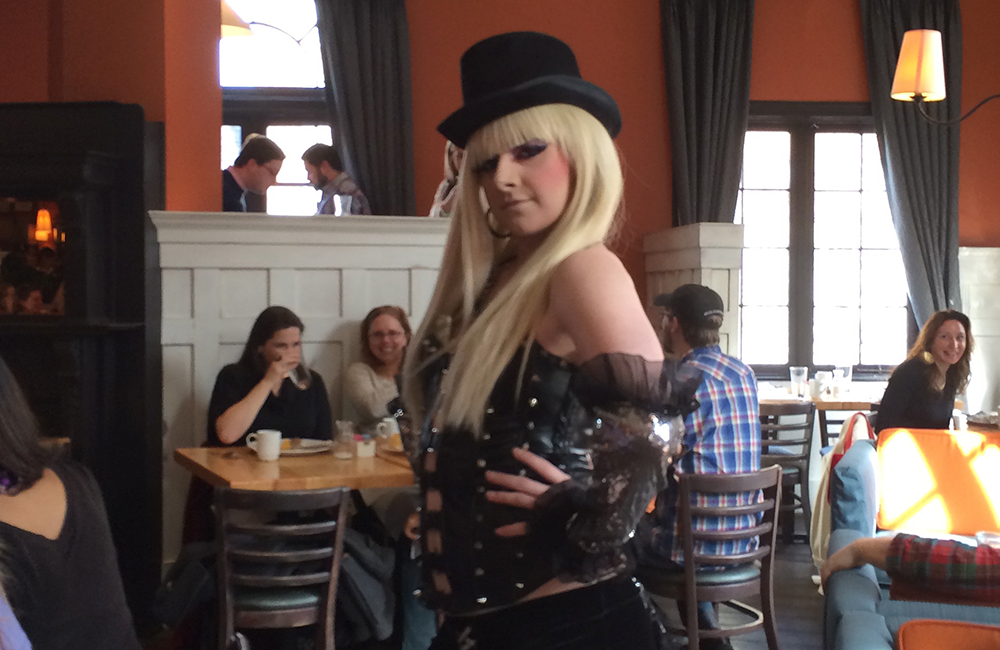 Don’t we all love brunch deep down, despite its reputation? Minus the title, it is simply breakfast that lets you sleep in and start drinking (age permitted) before noon. Brunch cuts out the pesky waiting period between breakfast and lunch, combining the two into one glorious chow-down. Perry’s, an upscale Japanese restaurant, has capitalized on this appeal. For the last 30 years, the Adams Morgan standby has hosted the Sunday morning brunch buffet we love with a twist.

Every Sunday, people line up outside Perry’s anxiously hoping for a table. There is chatter in the crowd, probably guesses about who will make an appearance today. Will it be the younger and energetic drag queens who shake it in ways you’ve never seen, or perhaps the seasoned veterans who tease the crowd with cute references and witty comebacks? Whatever the lineup, Sunday brunch at Perry’s is never dull. Seating is on a first-come, first-served basis and, while the doors open at 10 a.m., the show doesn’t officially start until 11 a.m. While the younger queens focus on lip-synching and dance moves that show off their amazing flexibility in high heels, the older ladies take it as their mission to embarrass the diners, specifically birthday boys and girls or any man does to answer the question, “Do we have any single men in the room tonight?” The language and explicit nature of the show certainly isn’t for the faint of heart.

Although the normal Perry’s offerings are fairly upscale, the Sunday morning fare is nothing to write home about. It is, however, a refreshing reprise from the confused assortment that is Leo’s Sunday brunch. The cost for the all-you-can-eat buffet, including coffee or tea, is $25.95. The buffet assortment features six different salads, muffins and breads, scrambled eggs, bacon, sausage, hash browns, waffles, sushi, assorted meats, egg rolls, fruit and pastries. Sure, your plate of salad, waffles and sushi might look a bit off, but the strangest things start to feel ordinary over the course of two hours at Perry’s.

Sunday mornings are often not Georgetown students’ finest hours, but don’t fret about the early start. If you can’t rally your group that early, you’ve still got options. The first round of guests start to leave at 12:30 p.m., so getting in line at 12 p.m. will almost certainly secure you a space for the second show of the morning. If you have any interest in exploring the Adams Morgan area, you can also leave your name with the host and return at the suggested time. A cheap and easy way to get to the restaurant is to take the G2 bus that leaves from 37th and O Streets NW until its stop at P and 18th, then walk a short distance west to Dupont Circle to get on the 42 bus, which will take you to Columbia and 18th Streets NW.

There are a good number of drag shows in D.C. and I’ve seen most of them. Many occur on the 18 and over nights of local gay bars and are, of course, fun weekend activities, but the Perry’s show has been seasoned and perfected by queens and patrons are loyal to this specific show.

The show is a landmark of gay culture in D.C. and has played witness over the past 30 years to our country and city’s transitioning attitude towards LGBT issues. Family in the area introduced me to the D.C. tradition of Perry’s Sunday brunch, and now it’s my turn to encourage you to experience the eccentric underbelly of this city.