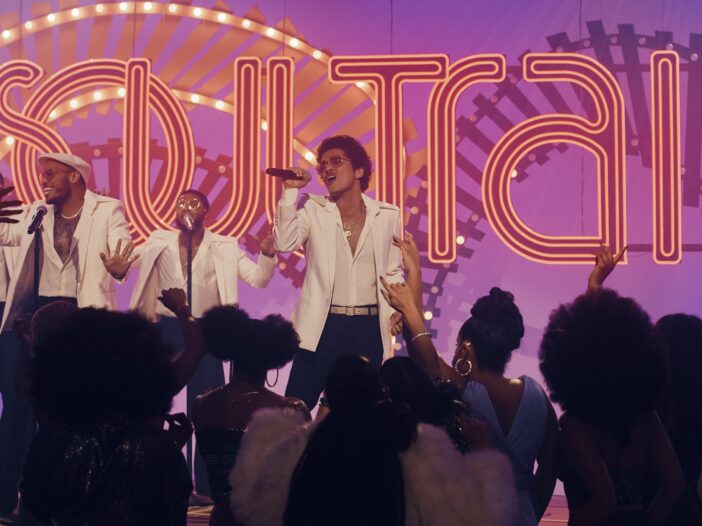 Old-school funk may make a comeback, thanks to Bruno Mars and Anderson .Paak.

Mars and .Paak, also known as Silk Sonic, released their debut album “An Evening With Silk Sonic,” featuring a unique pop and R&B sound that flounders at times when many of the songs attempt to recreate the success of the duo’s standout hit “Leave The Door Open.”

The two soulful pop singers formed Silk Sonic less than a year after .Paak released a critically acclaimed single in 2020 entitled “Lockdown.” Both artists had previously decided to collaborate on an album after .Paak opened for Mars’ world tour in 2016.

Silk Sonic’s debut single, “Leave The Door Open,” released back in March, received great acclaim for its old-school R&B sound. This recognition was well deserved — the track stands out as one of the album’s best. In the track, Mars and .Paak present a soothing beat and lyricism that discusses passionate love. Between Mars’ luscious harmonies and .Paak’s alluring rasp, the debut single set a high standard for the album.

Unfortunately, the album as a whole does not meet this standard, since most of the album attempts to recreate “Leave The Door Open.” Many of the other tracks are lathered in the same impersonality as this famous song, and they lack individuality due to their efforts to resemble it.

As the album progresses, Mars and .Paak’s sexual desires dominate several tracks. The lyrics of “After Last Night” epitomize this hyper-sexualization: “You put it on me like I never felt before / That gushy, gushy good, girl, I want some more.” The songs that feature a focus on this sensual content can become quite distracting at times, taking away from Silk Sonic’s instrumental construction.

“Put On A Smile” deviates from this trend by intimately considering a deeper and more emotional love. Alongside an anthemic drum beat, Mars and .Paak sing about the facade they adopt to win a girl back. The personal nature of this track may be because R&B legend Babyface — who is well-respected for his love ballads — is a co-writer. The track also showcases Mars’ greatest vocal performance, and his frequent high notes toward the end of the song demonstrate the emotional passion behind the lyrics.

.Paak also has phenomenal vocal performances and holds his own alongside Mars in the album. While .Paak often raps in his solo career, he has transitioned to mainly singing with Silk Sonic. .Paak is one of few artists today who can both sing and rap well.

Funk artist Bootsy Collins’ interjections throughout the album are another standout of “An Evening With Silk Sonic.” In various songs, Collins introduces Silk Sonic and sets a sultry tone with his reticent voice. Furthermore, his introductions immerse listeners by creating the atmosphere of a live show, providing the intimacy that the album’s lyrics fail to deliver. If Silk Sonic ever embarks on a tour, Bootsy Collins is a necessary addition.

Most importantly, the heavenly harmonies of the tracks seem to define “An Evening With Silk Sonic.” In almost every song, Mars layers his vocals on top of each other, and this harmonic component is necessary in creating its old-school R&B vibe. These harmonies not only demonstrate Mars and .Paak’s singing capabilities but also highlight Mars’ vocal production ability.

With “An Evening With Silk Sonic,” Mars and .Paak have clearly established themselves in making sensual R&B music, and the album may catapult them into legendary status in the genre. Still, the album underwhelms, especially in the shadow cast by the smashing commercial success of “Leave The Door Open.”
In the future, Mars and .Paak should create an album with more distinct tracks. But for now, “An Evening With Silk Sonic” will suffice in bridging the pop and R&B divide.